From the Battle Field to the Front Page for Love 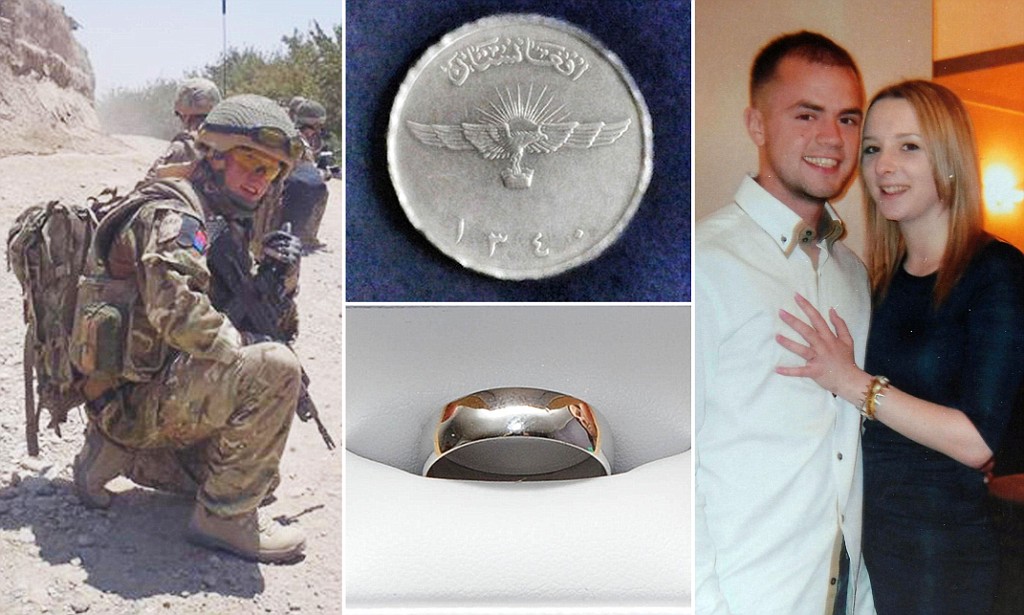 Ben Mc Dowell and Jolene Riley, an Afghani Penny and the Finished One Penny Wedding Ring

How did a British Army bombardier in Afghanistan make a one penny wedding ring? He made it from an Afghani penny and end up on the front page of the Daily Mail!

This story came to me from the blog post of my English jeweler friend Mark Johnson at Serendipity diamonds.

Ben Mc Dowell, stationed in Afghanistan was going to miss Christmas with his girlfriend Jolene Riley of the UK. He called her and said, “I will be away for Christmas – what do you want me to get you?”

“A penny.” She replied. This was the least expensive thing she could think of.

From here, the concept of the one-penny wedding ring was born.

Three Months, a Hammer, a Rock and a Big Heart

Ben McDowell, found an Afghani penny and  spent the next three months beating it into shape with rock. What an amazing surprise he came up with! Can you say romantic? 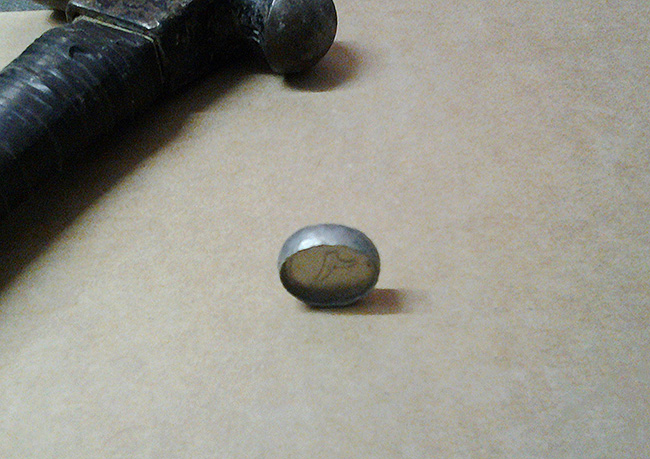 This is the Penny Ring as Mark Received it.

The Bombardier then sent it to my jeweller friend Mark Johnson of Serendipity Diamonds in the UK to size it and polish it.

Once the story was out it was covered by the Daily Mail who loved writing about such a unique story.

In Case You Were Wondering

The Afghani penny was made of a nickel based alloy. Once it was finished and shined contrary to the Daily Mail story it did not need any plating. It shined up that well on its own.

I asked Mark about the Daily Mail’s claim that it had been plated. He said, “they just made that part up, it’s not plated!”

It is so nice to read about someone who has been to Afghanistan and is OK and going to live a loving life.
I loved his creativity in making a wedding band from a penny. Just a great story Calla.

Hi Tracey,
Thanks so much for letting me know you liked it. Having had a career military man in the military I was quite drawn to that story. My uncle was a great guy and the military was a good career for him.
Calla Gold

Nice story!! I think he was a very romantic person. He was a brilliant and truly remarkable young man.

Hello Ariana,
I agree that he is a remarkable young man. To basically spend three months with a hammer and a rock and an Afghani penny and end up with a wedding band is so romantic!
Calla Gold

It’s got love, is has heart-breaking distance to that romance and it has a military man. I love this story. I love jewelry that has a lot of meaning and heart put into it. Great story, thank you for sharing it!

Hi Linda,
I’m so delighted that you enjoyed this story! It blew my mind too!
Personal Jeweler,
Calla Gold

Hi Calla.
It was lovely to see your post on the penny wedding ring. Thank you also for the kind mention. It was wonderful to be able to help and play a small part in what was such a unique and wonderful story. So nice also to see so many of the lovely comments following your write up. Keep up the great work. Mark.

Mark,
I so loved your story from a jewelers perspective and how that love story was embraced by the wider world, I had to blog about it!
Keep up your great work too Mark!
Your Jeweler Friend,
Calla Gold

What a touching story. I think it’s beautiful how he got her exactly what she said, but made it so much more meaningful. May their life together be filled with happiness. Thank you for sharing, and congratulations to Mark for his fine work. 🙂

Hi Lisa,
I’m so glad that the bombardier’s story touched you like it did me. You’re right, he did get her exactly what she wanted, in the best way possible! Like you I wish them a happy life together.
I’ll pass your congrats on to Mark as well.
Calla Gold

Thank you for all these lovely comments I am the pround owner of the one penny wedding ring. We are now happily married! We’ve just looking through all the articles which were published.

Hello Jolene,
Wow, I’m in the presence of celebrity!! Your story was sooo romantic.
I am so happy to hear that you and Ben are now happily married. Clients of mine have mentions that blog post about you to and told me it really hit them in the heart. They are not commenting types, but wish you well.
I’m so happy you came by the blog to say hello.
I wish you and Ben all the happiness in your life together.
Your Personal Jeweler,
Calla