Once she'd sent me pictures, I saw that her center section nicely bumped out making it look wrong with a straight band. She also had beautiful engraved details on the side walls of her ring that needed to be honored in her wedding  band.

We decided on a nice contoured band with diamonds to match and hand engraving to match as well.

Carol was over the moon.

To celebrate her happy story I thought I'd share pictures of other contoured wedding bands I've created.

Letty had a beautiful morganite and rose gold engagement ring to be sized.

I asked what she'd do about the wedding band. She said she hadn't liked what she'd seen so far and wanted it to be simple and to snug with her engagement ring.

I asked if she'd want to wear the wedding band by itself. She thought not.

The design I came up with won't look good worn alone. The plan was to scoop down to allow the halo bump out to do its thing.

This was a fun problem solving project. And it looks great on her.

I love science. I'm pretty fond of the creativity of a lot of the scientists I've worked with over the years.

This wonderful young man contacted me from our local University and wanted a curvaceous design that made me think of DNA, that would wow his scientist girlfriend.

I wish I remembered what branch of the science world he was in.

Curvaceous contoured bands are each different and guided by the outer curves and angles of the engagement ring.

When I first sat down to figure out the wedding band I was a bit daunted.

It turned out just great. She said yes!

When Melissa and Layne called me to design an engagement ring they had certain requirements in mind.

They are both fishermen and love to pop off out of town and go to beautiful wild places to fish. Melissa wanted to wear her ring while travelling and fishing.

She didn't want her diamonds sticking up and she didn't want ordinary. We came up with the freeform design and diamonds and created this fun engagement ring.

Months later as the wedding was roaring closer we met again to figure out the wedding band. Since Melissa also admired the Etruscan style especially the raised balls, we came up with contoured bands in contrasting yellow gold for a color pop. 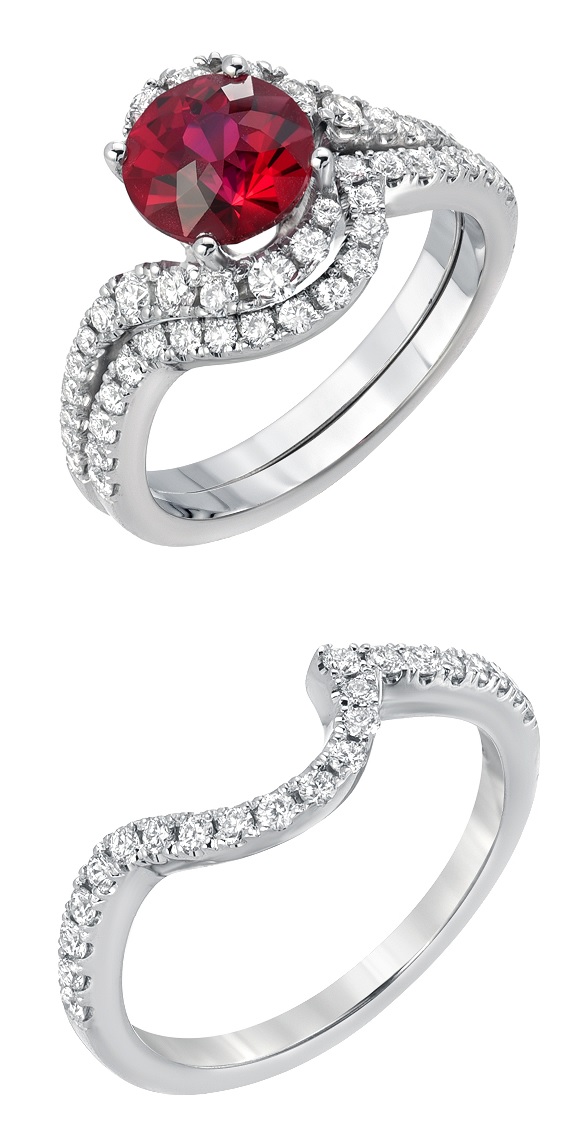 Jeremy had a picture in his mind of a very unusual cut ruby and an outer space vibe for his engagement ring. I loved the sharp curves we'd be working with.

I just have to say that the Nymphea cut of his ruby is amazing and I loved getting to show it off with prongs.

We had the design embrace the ruby like a nebula.

The wedding band contours exactly around the engagement ring. Can you imagine this with a straight wedding band? Nope? Me neither. 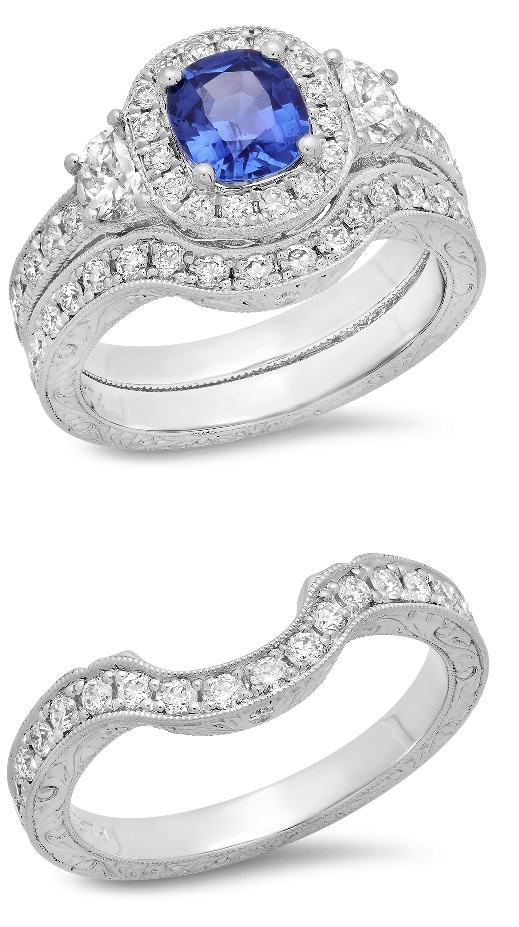 Beverly is a successful veterinarian who loves beautiful things and versatility.

She knew she wanted a sapphire as her center gemstone and wanted it fairly low set. This means that it will be set low enough to have a bump out.

That is the trade you make. If your center gemstone can be set higher, then the wedding band can snug up next to it and kind of slip underneath a bit.

She also wanted to be able to wear the wedding band alone. Mission accomplished.

Mixing Metals With a Wedding Set

Courtney's engagement ring needed a contoured wedding band and I was happy to be a part of that.

She thought it'd be fun to have it done in yellow gold, because having the warmth of rose gold and the light yumminess of yellow gold would look different and give two different kinds of warmth.

I was a little concerned that the center sapphire might not be cool with all that color. Nope, it looked great.

Courtney loves color and between her center bluey purple sapphire set in rose gold, her yellow gold wedding band and her fabulous nail colors she took color chances most other people won't. I'm so happy she is brave like that.

This is an example of a contoured wedding band design that can't easily be worn alone. Although if anyone could pull it off it'd be Courtney.

A Vintage Ring and its Contoured Wedding Band

In a double whammy of wonderfulness I had the pleasure of working on this vintage ring and creating its wedding band mate.

George called and said, "can you size this ring for me?"

From a simple sizing appointment we ended up talking about beefing up the prongs, the shank and touching up the engraving as well to make it strong enough for daily wear.

That turned out so well that a few months later I was asked to design the wedding band.

This ring has two center diamonds, which is quite unusual even in the vintage rings world.

I love how unusual the shape of the engagement ring is and how cool the wedding band turned out.

Inspiration from M. C. Esher for a Wedding Band

Number one, I have mad respect for her ring design. Harry Winston. Yeah. I'd never done custom work to go with a Harry.

Because of the wonderfully convoluted angles on her ring I wanted to create balance and not just slap a contoured ring on one side as it would unbalance the set.

I felt like M. C. Esher could do this in his sleep. Unfortunately this is me and I got sleep interrupted thinking about it. But I got there. This may be the most complex wedding band I ever designed.

That was over fifteen years ago and she wears it daily. Whenever I see it I feel a happy glow. 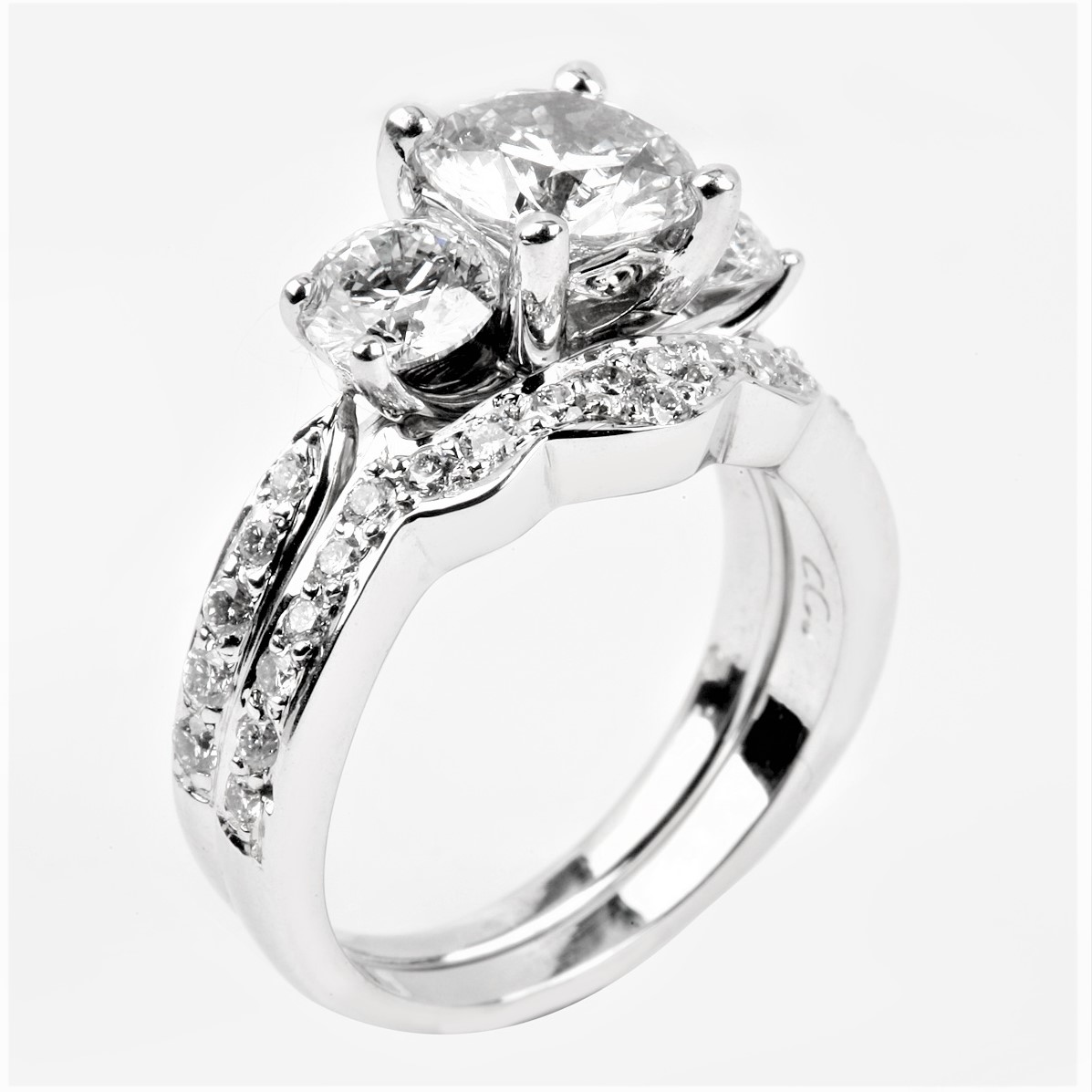 If you have an engagement ring that doesn't look good with a straight band, perhaps a custom made contoured wedding band would be the right band for you.