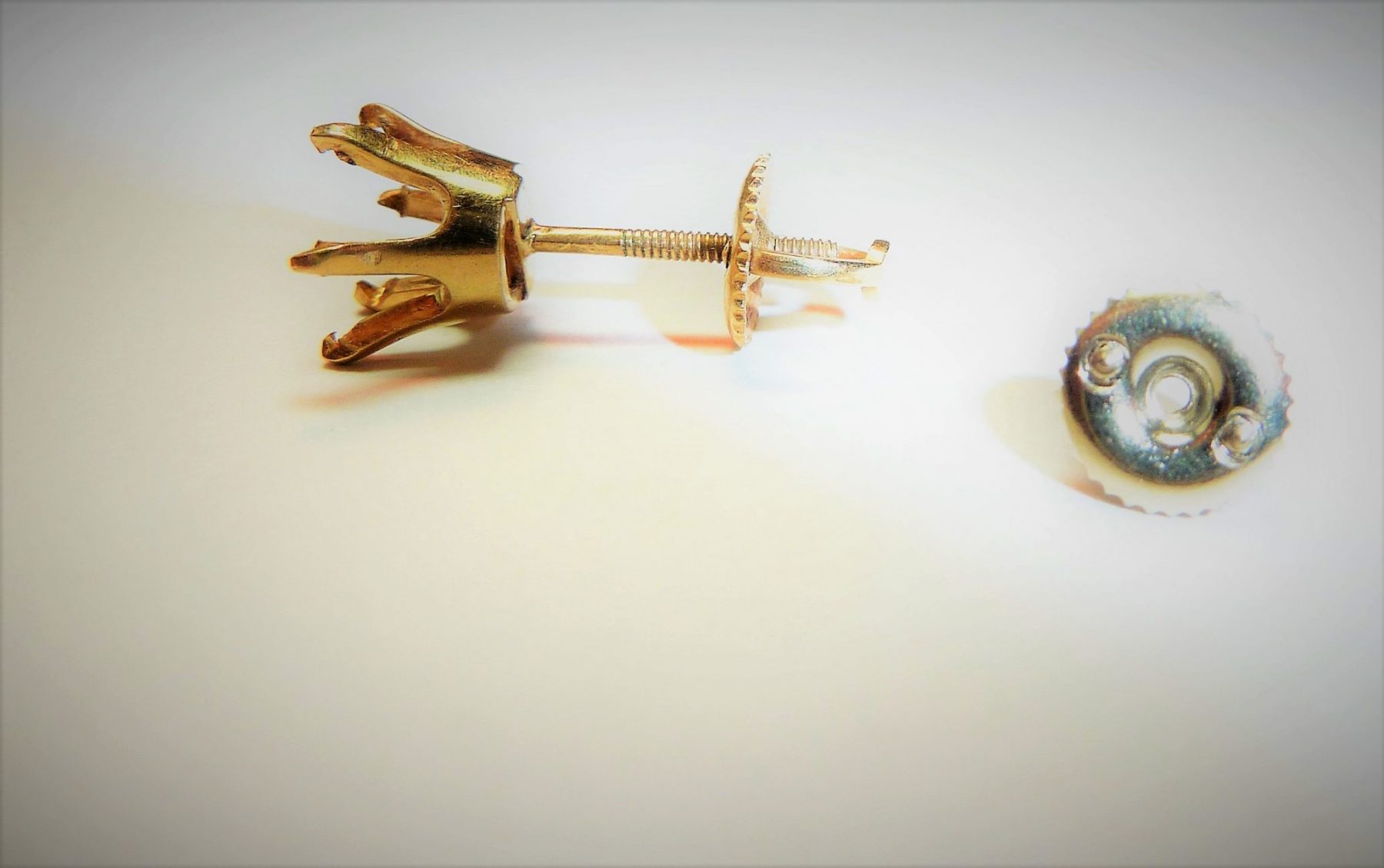 The story of lost screw backs and the earring infection of Josie Ann.  Josie Ann’s husband finally got those diamond studs she’d been hinting about for ten years. She was over the moon. Until one of them almost went down the drain in her shower.

Josie Ann has a heck of a lot of curly hair and as she says “it’s like another person.”  And that person was not happy with the diamonds! Clearly, or it wouldn’t have yanked one of them out of her ear right?

She ran down to the mall and asked what were those screw things her friends told her were the most secure thing ever. She ended up with screw backs and they were so much of a production to take off that she wore her diamonds all the time until one of the screw backs pinged off in the shower.

What is it with showers?

For the second-time Josie Ann’s backing had come off, and both times the diamond stud stayed in. Seriously blessed. She had a freak out attack anyway. Wouldn’t you?

When she unscrewed the other one, and took it off, it’d been in so long it kinda hurt coming out and she got an infection for a few days because as she said, “the goo and grit on that thing was knee high to a pig in a wallow.”

“How long had you worn those?” I asked.

“Maybe a year.” She shrugged.

That would explain the goo and grit. It is a good idea to take your earrings off and clean them weekly. A year is pushin’ it.

I showed her the screw back posts under my magnifier. She said that was so gross she might never wear them again. I then showed her her finger under magnification. She said she might never touch herself without gloves again. She’s pretty funny. But seriously everything looks freaky under ten times magnification. But the fact remains that a lot of junk can get caught in the screw pattern of a screw post on earrings.

It’s one of the downsides of screwbacks. The other is that there is this assumption that the screw back is the most secure thing ever for your diamond studs. Weeeeeeell. Maybe not.

Do You Lose Earrings Often?

That’s what I asked Josie Ann. “Not really.”

“Then why the screwbacks in the first place?”

“Well because the diamonds are worth more than I am for starters!”

I laughed. “So it’s not screwbacks you need, it’s peace of mind right?”

“I want to share with you a very cool backing style that is very secure and it doesn’t need to be screwed off.”

“Does it have goop catching lines?”

“Nope, except for its safety notches it’s smooth as a baby’s butt.”

“When these go on they don’t come off until you press the sides together. If you don’t press the sides and you manage to work the back towards the end of the post, they’ll hit the locking line and lock in there.”

“No screwing at all?”

“Wait you have one more choice.”

“I’ve already picked my favorite piglet, you’ve got yourself an uphill battle here.”

Since there a couple of different choices we’ll jump out of Josie Ann’s story for just a mo’.

The original guardian backs has an easy to feel pair of flanges that stick out from the rest of the round smooth backing. The ratchet pattern makes it easy to feel where to press and the pattern is easy to grip.

The next generation of backs is called Guardian II, Comfort Trigger. I find the original which works, to be improved upon with the comfort trigger. Sometimes the thin original pieces to squeeze can hurt my finger tips. The comfort trigger has a better feel while gripping them to put on or take off.

It is important to never try to just pull them off the post without squeezing. You can break the mechanism that springs inward to lock it shut. I only know about this because one of my clients broke one in this way. Her comment. “No taking off diamond earrings after drinking.” Seems like sound advice to me. 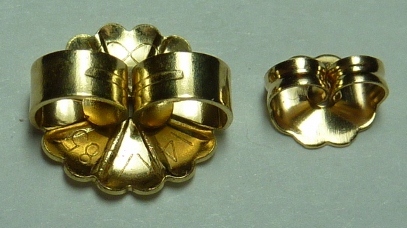 “Monster backs support the back of your earlobe so it can’t sag forward.”

“Seriously, my diamonds are not that big!”

“They also take concentration to take off because they are thicker than normal backings and larger. So they don’t come off by themselves. You need to concentrate and give a controlled grip to get them off.”

“They sound very nice sweetie, but I’m going for those guardian backs.”

“Sounds like a plan. I’ll order them, solder on the new posts and have you back in your diamond studs soon.”

“That sounds great. Now what do you have in pendants with horses on them?”

What is not to love about Josie Ann?

I guess I wasn’t crazy being skeptical about those screw back earrings!

Hi Sherill,
Not skeptical at all. I found the lack of a locking element to be the most troubling thing of all.
Your Personal Jeweler,
Calla

This was very helpful. I’ve noticed more ear infections with my diamond studs with screwbacks than my pearls with straight posts. So I can report from the earring infection battlefield that this is a true concern.
I’ve read many of your posts and this one was very informative. I am now planning to change backs. I’m getting your guardian style as soon as I talk to my jeweler.
Wish you were closer.

Hi Tracey,
I wish I was closer too, but I’m glad that you’ll get your local jeweler to help you solve the screw post problem.
Your Personal Jeweler,
Calla

Can you use the guardian ear backs on a stud with a screw back? Thanks

Hello Janice, You will not be able to use the Guardian ear backs with a screw back post. The reason this is so, is that when you buy the Guardian backings you are also buying the post, that goes with it. That post has the special extra deep double lock grooves at the end of each post. With screw backs backings, you have a threaded backing that screws onto a threaded post. In the case of Guardian backs and screw backs, each backing requires its very own matched post. That is why when someone emails me and says, I lost… Read more »

Hi There: Interesting conversations. I have a problem with droopy studs. They are heavy with a screw back post. I would love to wear them everyday and absolutely take them off weekly ifnot sooner!. Hoever, I need one of the backing you suggested onyour blog for security and also to keep my studs facing forward and not at the floor. HELP!! I LIVE IN FLORIDA AND AM UNFAMILIAR WITH ANYONE HERE WHO CAN DO THE JOB. ANY RECOMMENDATIONS WOULD BE APPRECIATED. THANKYOU. DENISE

Hi Denise,
Since I am in California, I do not know of any Florida jewelers.
I’d just look into local jewelers who do custom design. They tend to have a better grasp of problem solving than places that just sell jewelry.
Your Personal Jeweler,
Calla

I bought a pair of diamond studs with guardian backs and one of the backs either stripped or completely quit locking. Could have lost the earring. Fortunately happened at home and my carpet is so dark the back stood out on the ground. Took earrings back. Beware~although the backs are so much more comfortable, they are NOT secure.

Rebecca,
You have pointed out a weakness in the Guardian backs. It is vital to squeeze the sides all the way in or the mechanism which is very small can be broken. I’m sorry this happened to you.
Your Personal Jeweler,
Calla

Thank you for posting this. I’d hate for someone to lose any priceless gems.

Hi I have a different problem. I purchased an 18 kit gold leaf design earring with multi gemstones and diamonds. The earrings are very heavy the post and leaverback clip where in the wrong place on the earrings so I sent the earrings back to be corrected. They returned them to me but still the earring being large and goes all the way up the ear but they still do not lay flat but drop away from the ear. Would an ear cuff at the top of the earring help placement as well as the post and lever back?

Hi Linda,
Any time you have a too heavy earring, drooping forward can be a problem. Your potential solution sounds like a good one.
Calla