Let’s Talk Turkey About Fixing Your Ring Disaster. In Ring Disasters, Part 1 – “Broken or Pancaked Prongs” your Santa Barbara Jeweler told you how to spot when your ring prongs are heading into the red zone. In this post I’ll explain a common ring repair called Re-Tipping of Prongs.

Your diamond is gone, your ring has a broken off prong or you have a pancaked, (worn down, flat as a pancake), prong. What do you do? The Santa Barbara Jewelry Repair solution to consider is Re-Tipping.

How Re-Tipping of Your Ring Prong is Done

Re-Tipping is the process of cutting off the old prong, below its weak area, making a new prong and soldering it onto the ring.

Most of the time your gemstone must be removed before this work can be done. This is because of the heat needed for soldering. Sometimes many surrounding gemstones must be removed for their own safety when this work is done.

Why Do the Gems Need to be Removed?

The heat of soldering, (connecting the new prong to the existing ring using heat),  can crack or discolor gemstones sensitive to heat, if not removed first.

What if Because of the Design the Gemstone Can’t Be Removed?

Why Give Us All the Gory Details? 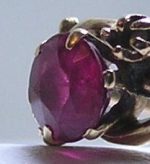 This is a very common jewelry repair and I’m blogging about it because I run into a lot of folks who would like to understand it better. I’ve been told, “If someone had told me about this five years ago, I’d still have a diamond in my ring.”

When do you Recommend Re-Tipping?

If only one prong is damaged, Re-tipping is the recommended solution.

If more than one prong is broken or in danger you might want to read: Part 3 – Ring Disasters, Part 3 – Ring Prong Re-Tipping Pro’s and Cons

The Rest of the Re-Tipping Series

Ring Disasters, Part 5 – When Re-Tipping is Your Only Option

Thank you Calla for the insight on re-tipping. When you have a ring that you have worn 24/7 for 21 years those prongs are bound to need some TLC!!! I am glad I have a very good jeweler for all of my repairs.

Nancy,
Thanks for reading the post, and trusting me to fix your beautiful big diamond ring!
Your Happy Personal Jeweler,
Calla