Tamar’s big aquamarine just wasn’t working as a ring. First of all Tamar didn’t wear yellow gold and second of all when she tried wearing it, besides being gigantic, it wouldn’t stay upright.

There are many reasons to turn a ring into a pendant, but a big one is if your ring is too big for you to wear comfortably.

As a fan of Sterling Silver, Tamar came to me to do something so her aquamarine would be in white metal.

I asked her if that the size of the aquamarine, which was pretty big for her hands was something she was comfortable wearing as a ring. She said she probably wouldn’t wear it much. I suggested making it into a pendant.

She said she loved her Sterling Silver ring, that she happened to be wearing and would love to have a pendant made in that style. We made it and paired it with a bold chain and now she wears it comfortably and happily.

Arjun’s Gift, a Cocktail Ring into a Heart Pendant 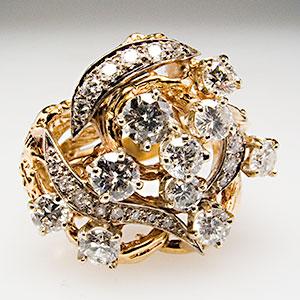 When Arjun inherited his grandmother’s cocktail ring, he stuck it in a safe.

Years later it was still there.

Arjun called me wanting to design a heart pendant for his wife for Christmas.

The closer I looked at his cocktail ring, the more I saw that it was probably a combination of a number of previous rings.

There were different aged cut styles and diamonds, differing white to gray hues and differing sizes.

We chose the best of the large diamonds to be the central one. Pulling out the small diamonds, we used a pave (like paving stones) style setting to work in differing sizes of diamonds.

When Arjun saw the finished necklace, he couldn’t wait until Christmas to give it to his wife Lakshmi.

Debra’s mom passed when she was still a teen. All she had left was her mother’s wedding band.

She felt that she wanted to do something special with it to honor her mother, but for years didn’t know what to do.

Over time she’d gotten a new wedding ring and new earrings similar to those she already had. 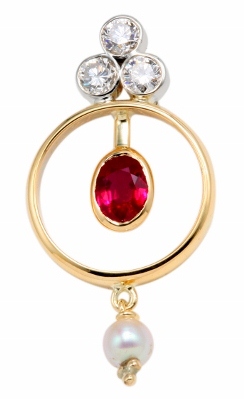 Debra’s Precious Mom’s Wedding Band Made Into a Necklace

Diamonds and a ruby were saved unset from these projects and gifts.

Each gemstone had meaning.

Debra asked me if we could come up with an idea to combine her meaningful gemstones with her mom’s wedding band.

Ancient Greek lore said that pearls were tears of the gods. We added one pearl to her mother in memoriam.

This was one of the most emotionally meaningful projects I’ve worked on as a jeweler.

Debra wears it daily close to her heart.

Kara didn’t want to look at her wedding ring anymore after her divorce.

It had never been designed for her, just given to her as a vintage ring.

However she loves her kids and her life and felt she had earned the sparkling diamonds in her ring. 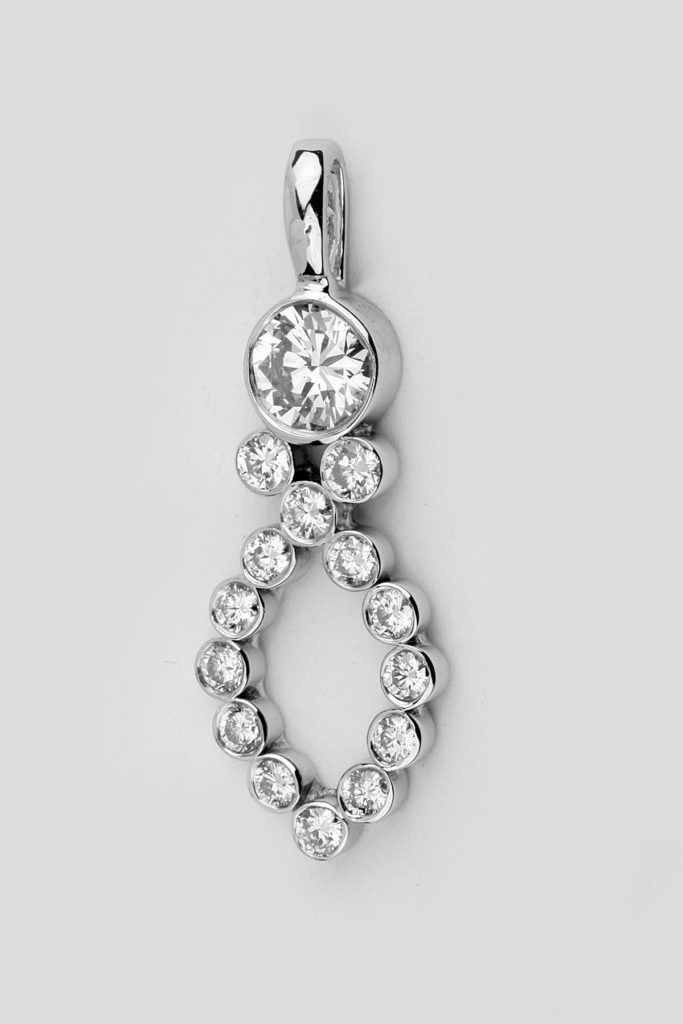 Goddess Pendant From a Wedding Set

She started volunteering, helping her kids and finding who she was when she got to chose.

Her spiritual awakening, influenced the design of her new pendant.

She decided since she was simplifying her life she wanted a no catch setting style. The one thing that had driven her bonkers with her old ring was the prongs catching on things.

We chose smooth bezel settings for a clean modern look.

When I ran into her a few years later, (happily re-married and looking wonderful) she told me she calls it her ‘Goddess Pendant.’

Princess Cut Diamond, From Ring into a Pendant 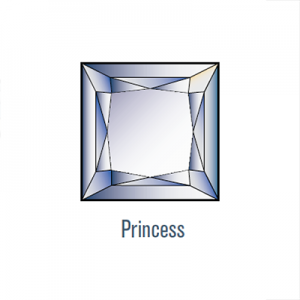 Dee wanted to create a pendant after Walt got her a whole new wedding ring for their twenty-fifth wedding anniversary.

We had a lot of fun picking the oval diamond and then designing her anniversary ring.

She was so surprised. Dee said it was the best surprise she’d ever had. She is not easy to surprise.

Dee and I met a few months later to discuss repairs.

I asked her what she wanted to do with her princess cut diamond.

She hadn’t even thought about it.

We ended up going casual and rustic using a recessed stipple finish and three different sizes of milgrain engraving. She loved it.

Uncle Bob’s Ring into a Pendant

When Marly had me polish up the ring she’d inherited from her Uncle Bob, I thought, “hmm, that’s not her at all.”

He’d worn it as a pinky ring, so it had actually fit perfectly.

But a perfect fit does not make a match.

When next we met up I asked her if she’d been wearing it. She pulled it out. It was shiny and perfect.

“I didn’t think so. Let’s take those pretty diamonds turn a ring into a pendant to honor him. Let’s make it something you love too.”

Marly and Bob shared a love of Sci Fi and space.

“I want a moonscape with the three diamonds like stars in the firmament!”

This was a fun and challenging project using open fire after casting to create the texture.

Rhondy’s Ruby’s for Roseanne, From Ring to Pendant

When a broken ruby ring ended up in the repair pile, Rhondy wondered if we could use the rubies to create a gift for her daughter Roseanne.

Rhondy like many mom’s, (myself included), felt that communication could be better with her early twenties child. 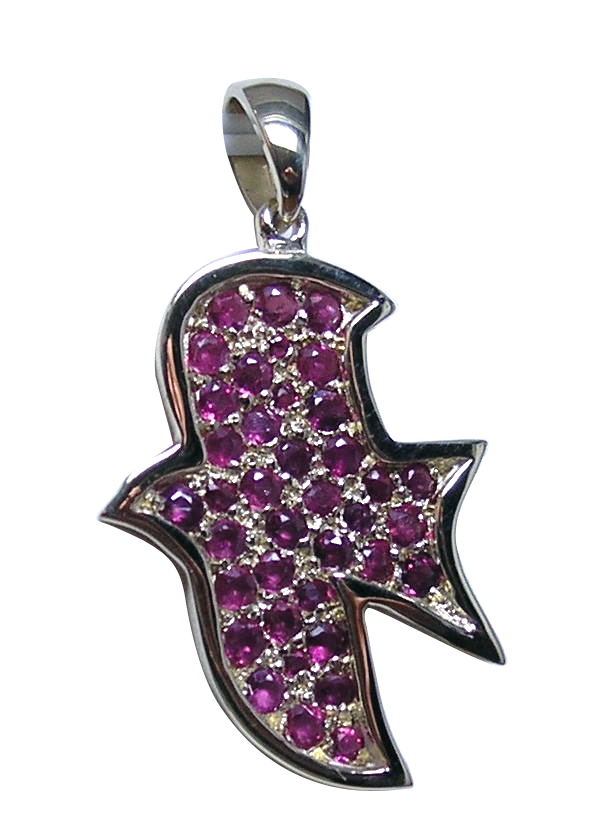 The Dove Symbolizes the Holy Spirit

Rhondy wanted her gift to have meaning.
She had re-embraced her faith after years of not going to church. Roseanne had been a part of that happy change.

That’s when the beauty of the dove became our focus.

When Rhondy told me of their meeting when she gave Roseanne we both cried.

Her gift will be worn with love and a grateful heart by Roseanne. It will be a constant reminder of how much her mother loves her. 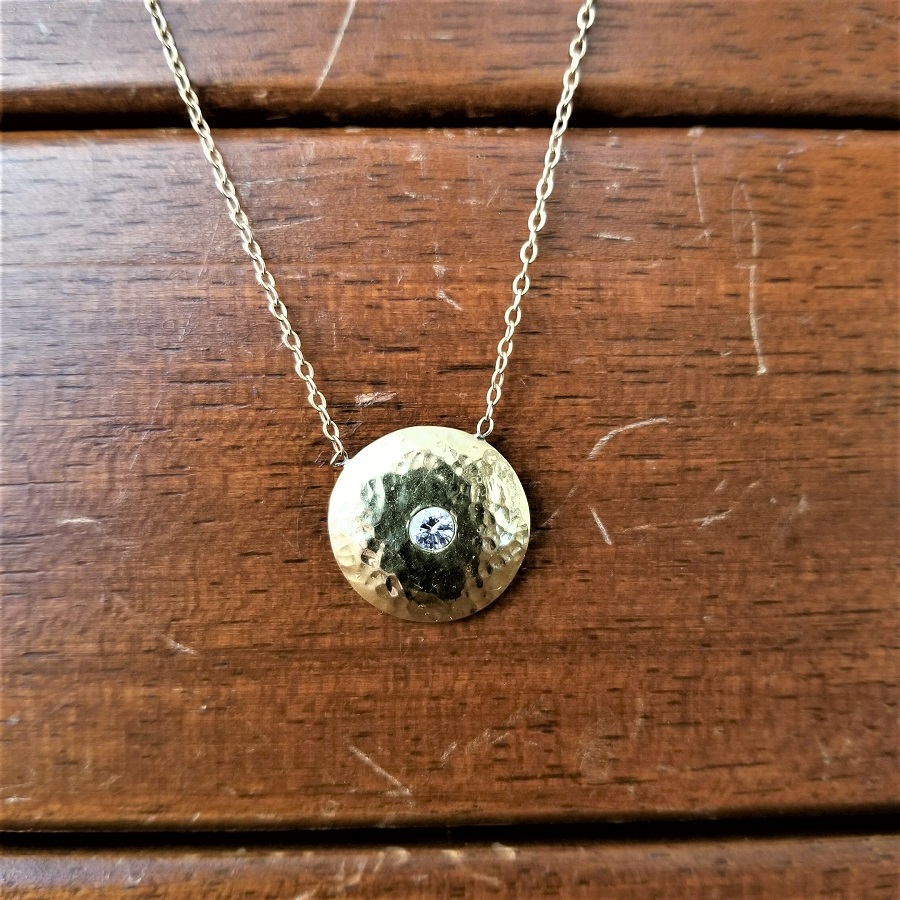 My Own Grandma’s Diamond Necklace

I thought I’d share my own ring into a pendant story. My grandmother’s engagement ring diamond lives by my heart.

I hope you’ve been inspired by some of the ideas here to turn a ring you’re not wearing into a pendant.