One of the biggest disappointments for newly married couples is feeling underwhelmed with their now dull plain platinum rings.

All they wanted was a plain and simple wedding band with an expanse of shiny platinum. Yummy. Only it doesn’t stay shiny for long. This is not what they signed up for!

In this blog I’ll be comparing white gold and platinum because I am asked most often to compare these two metals.

Three Reasons Why Platinum Gets Dull

1. Platinum is a malleable metal

2. Platinum is used in a more pure form than white gold

3. Platinum is softer than white gold in jewelry making

Platinum vs. White Gold on the MOHs Hardness Scale 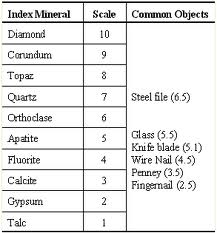 For comparison, pure gold is 2.5, on the MOHs scale. That’s about the same hardness as your fingernail. That will not work for jewelry making. When white gold is prepared for jewelry making, by adding alloy metals, for example at 14kt or 58% pure gold, its hardness gets bumped up to 3.5 – 4.  That looks about the same as platinum. Right? But it’s not just the hardness that determines how your metal will wear and look over time. What the MOHs scale doesn’t show you, is the way your chosen metal reacts to harder obstacles when they collide.

How Density Makes Platinum Strong. Why it Wears Differently than White Gold 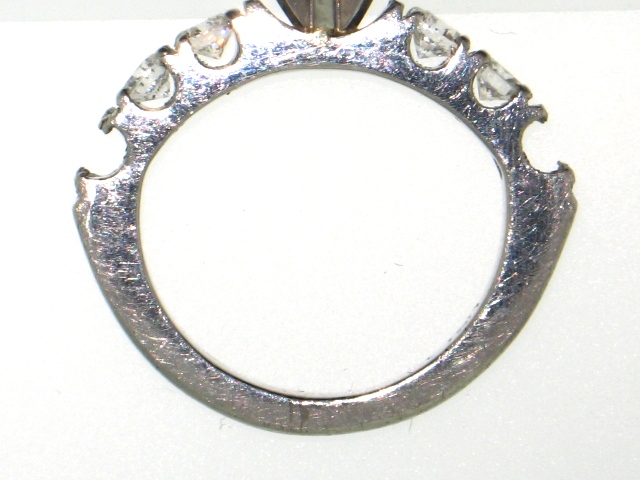 Platinum can Scratch More Deeply Than White Gold. It can also bend.

Platinum is more dense than gold. The same amount of platinum weighs 60% more than gold. This is because on a molecular level there are more and smaller molecules packed into that little bit of space in platinum. Platinum’s density allows it to be used in a purer form than gold. This density translates to strength. But, that does not make it Superman. Or if it does make it Superman, its Kryptonite is the daily-wear bashing about it gets. Platinum is a soft metal. When it gets a scratch or a micro-dent, it is actually moving out of the way of the harder item it is colliding with. 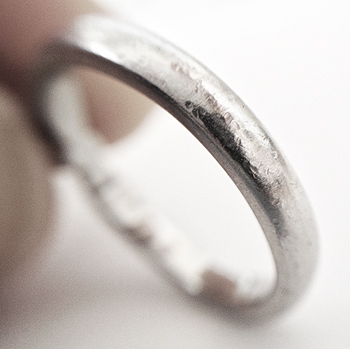 Platinum Dents and Deforms When it Contacts Surfaces.

14kt White gold, which has been alloyed with stronger metals to make it into jewelry and make its normally yellow color white, has become a harder metal than platinum. To compare, we’ll take two identical wedding bands. Each band is 6mm wide and 2mm deep and high polished. Then let’s assume I hit each band against the same three harder surfaces. The white gold can leave a tiny bit of itself behind on the harder surface and show a scratch on its surface. The scratch will be very thin as the hard metal resists the harder surface. The platinum band scraping against the same surface moves, and its scratch may look a bit deeper. This is because the metal is softer. Its response to the surface is to yield, to get out of the way. But because of its density, it does not leave a bit of itself behind. 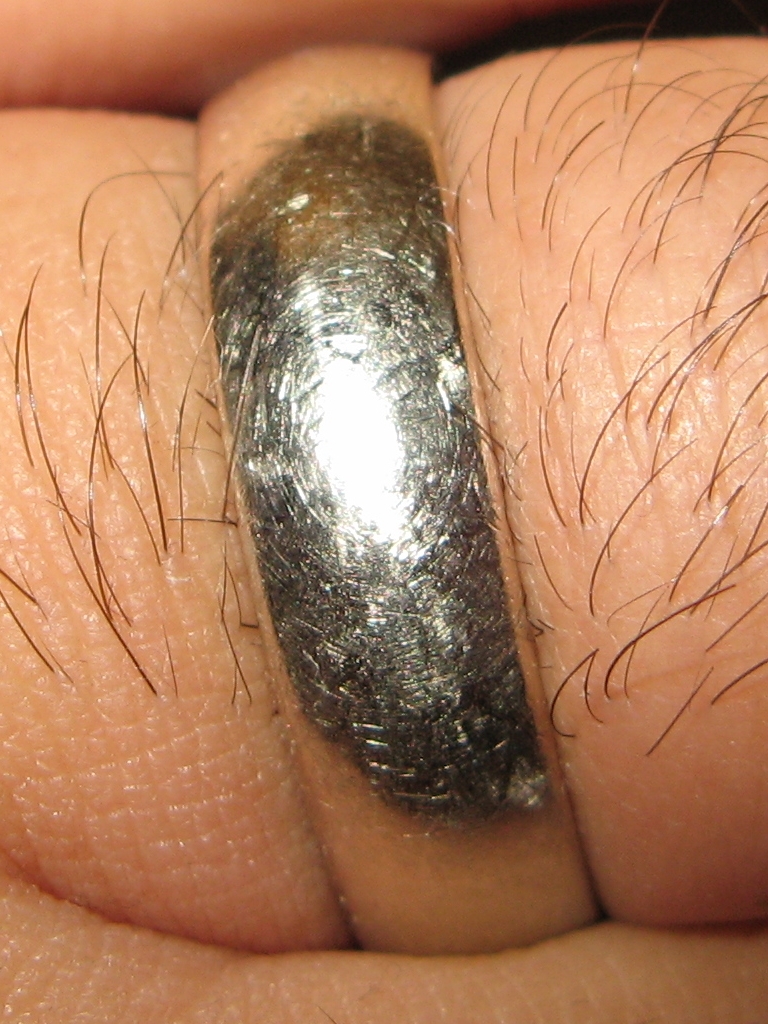 White Gold Ring Still Shining Even With a Ridiculous Amount of Scratching.

The final effect of this experiment is to show us that white gold, though it may have many fine scratches, is still shiny and can be worn quite a while, being banged about and still shine. Platinum by softly yielding and getting micro-dents gets to a state where no part of the surface hasn’t moved. Platinum becomes dull because of this. This dullness happens more swiftly than people like.

I give more detailed information on the behavior of platinum in my blog: White Gold vs Platinum, What’s the Difference?

Why Polishing Too Much Hurts Your Platinum Ring 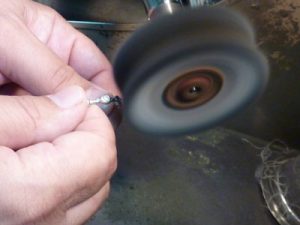 One of my new clients had been married for six months and gone back and had her platinum wedding band polished up six times. Her little band was thin to begin with and I explained that if she kept polishing it, it would get too thin after a while.

Unlike the microdents and scratches platinum gets when hit or ground against a harder surface, when your platinum ring is professionally polished, we need to even the surface to hold the high shine. The polishing wheel and technique remove platinum from your ring.

Am I Against Platinum?

I’m not saying don’t buy platinum, I love its malleability. It’s fun to work with for certain designs.

It takes curves in hand engraving like a knife to butter. Beautifully.

In my opinion, if you are planning to choose platinum for your wedding ring choice, you should include details in your design, as opposed to plain, flat and shiny.

This video shows white gold and platinum next to each other as I discuss this issue further.

If you have a platinum ring that is dull all the time, there are possibilities you can consider to make it look nicer.

You might add hand engraving which adds interest and sparkle if the shape of your ring makes it a candidate. You could also consider adding other details or textures. What makes the dull look bad is if that is all you see. I added a hammered finish to a man’s platinum band. When it got dinged up, for some reason, it looked fine. The hammering changed the visual expectation of the band.

Designing For the Daily Wear Ring With Platinum

If you are going to design for platinum, think about differing heights in the design to add interest, engraved designs, and adding little diamonds on the band.  These touches will create sparkle and shiny areas on your ring. 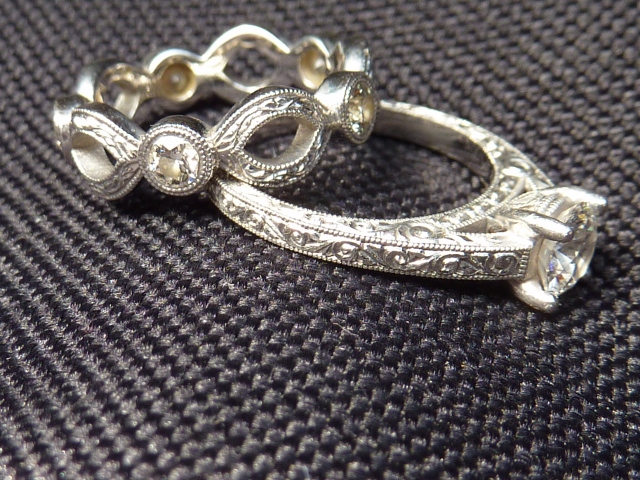 After Dullness and Plain Finish on Her Engagement Ring, We Added Engraving. Now She Loves it.

Do you have a platinum ring that’s been looking dull? Something can be done about it.

Thank you for another great article. I enjoyed reading it very much!

Hi Nancy,
Thank you for coming by and reading and enjoying my article about why platinum dulls so fast.
Calla Gold

I have a hand engraved platinum ring that I love but it sure is scratched and dull underneath. The engraved wedding set you designed is one of the prettiest I’ve ever seen. You’ve inspired me to do something about my ring and bring back its beauty! I’ll be calling you Calla!
Lori

Hi Lori,
I look forward to seeing your engraved platinum ring. Hopefully I can carefully polish your engraving and bring it back to that pretty look that makes you love it. I’ll sit by the phone! Well maybe not all the time!!
Your Personal Jeweler,
Calla

Hi Linda,
Your words make my heart sing! Thank you so much. I’m glad you liked the solution to platinum’s little problem.
Your Personal Jeweler,
Calla

FANTASTIC ARTICLE. I always learn so much about jewelry from Calla Gold. Thanks again, for educating us about the quirks of platinum.

Thank you so much Michelle!

Whenever Ive noticed a beautiful Platinum ring it gave me a bad case of the “envies,” but now that I know about the downside I’ve decided white gold will be my next goal. Meanwhile, Calla you are a master jeweler. I really love the ring you redesigned to help your customer fall in LOVE again with her misbehaving wedding ring. Such service and passion you put into to your work…you roar!

Linda,
I’m thrilled to help tame the envies! You are pretty cute there my dear.
Thanks for sharing your thoughts!
Your Personal Jeweler,
Calla Gold

I’m not sure that I follow. Are you saying that platinum is softer (more malleable) than gold? I’m asking because that is patently not true. In fact, it’s the opposite. Where did you get your information?

Hello Christoffer, You are right that pure gold is more malleable than pure platinum. In this blog post I am saying that platinum rings are more malleable than most gold rings.Gold is heavily alloyed with harder metals to give it more strength and toughness. Platinum is much less alloyed when used in jewelry. It is this choice that causes the unintended effect of quicker dulling on a platinum ring than a gold one. In this blog post: https://www.callagold.com/all-about-rings/white-gold-vs-platinum-wedding-rings/ I show graphs comparing the amount of pure gold vs alloys for jewelry making vs platinum. Pure gold is more malleable than… Read more »

Hi Calla, I’m interested in getting a platinum band for my wedding ring so I do have the same concerns as in your article. Would it be better if the ring is faceted? Like this one : https://www.etsy(dot)com/listing/167777003/custom-mens-or-womens-modern-unique?ref=related-2
Thank you!

Dear Emi,
I think the textural look will make a nice difference in the look of your platinum band. The faceted textural look is a nice look.
Platinum Jeweler,
Calla Gold

I had a platinum ring made but realised the width was too thin for my liking after it’s been made! It’s been set with tiny little diamonds halfway around the band. Now I’m wondering if it’s possible to have it re-made to become wider, or does that mean just buying a new ring altogether?

Hello Gem, I had a client with a too thin platinum band with diamonds and engraving. It was doing that muffin top thing on her hand. She’d chosen that thinner width so she could have platinum and there was a budget. Because it’d have been a waste of money to melt down her ring for credit, we made a matching ring and laser welded them together. I also accentuated the comfort fit underneath, that convex shape and that also helped make her finger not do the muffin top puffy look. It really worked out well. Since you have diamonds on… Read more »

Thanks for sharing the valuable information and i hope it helps many people. I too faced the same problem with my platinum ring. It was becoming very dull looking. I had to take it to the jeweler for polish work. Now I know a solution for it.

Hi David,
I’m pleased that you liked the suggestions. So many people had mentioned this as a problem I felt it was time to write about it.
Your Personal Jeweler,
Calla

Hi Calla, You sound very knowledgable about dull platnuim rings so I’m glad I found this article! Yesterday I took my engagement ring to get the prong repaired (same place as purchased). I brought my thin platnium band along with diamonds half way around and mention I no longer liked it bc the back looks like metal. I asked if he could do anything about that like add diamonds all the way around but he said it wasn’t worth it. He said he can smooth it out and it would look beautiful, essentially he would fix it for less than… Read more »

Hi Elise,
My guess is that this jeweler polished your platinum ring and rhodium plated it to give it that nice shine. This will wear off. But to many wearers of plain platinum it is all they can do to make it look less like a fake nickel made in metal shop class.
To salvage the ring and save it from dull boringness you could consider engraving on the plain part.
Your Personal Jeweler,
Calla