I gave one of my 4-year-old blogs the "Update" treatment! New pictures, new story. And a new video at the end.

My favorite job as a Santa Barbara repairing Jeweler is witnessing peoples’ faces light up upon seeing on a treasured piece of jewelry, that has been restored to pristine condition.

My second favorite job as a jeweler is sawing off rings. Job #1 happens all the time. Job #2…not so often.

Hopefully you'll never get trapped in your ring, but if you do, know that jewelers regularly saw off rings. This goes for gold, silver and platinum. This does not work for titanium and alternate metals. 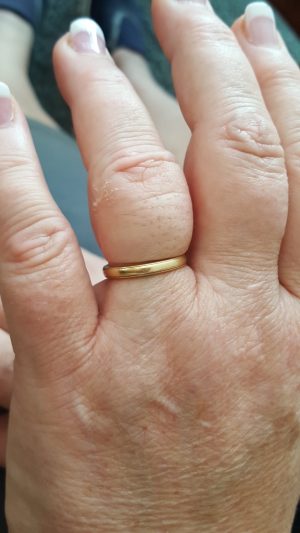 After Thirty Two Years This Ring was not Coming Off.

I always get a kick out of hearing how long someone has worn the offending ring without taking it off. The record, so far, is thirty two years. A narrow, white groove of flesh around the base of Mandy’s finger suddenly became exposed after I sawed off her ring. After thirty two years, her fingers had grown a couple sizes. Her ring hadn’t. 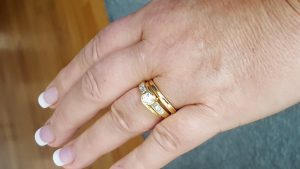 The Rebuilt Wedding Band, Fitting Nicely, Back Where it Belongs

Mandy knew it had to come off, but she was afraid it would hurt. She felt the pressure of having the thin gaurd put between her ring and her finger, but said, "that was faster than I expected. What a relief to have it off."

How to Saw Off a Ring 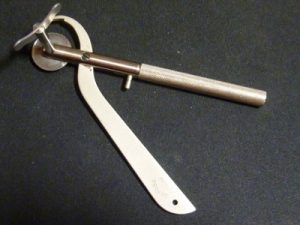 I use a little hand cranked, circular saw, with a three quarter inch diameter blade, to saw off rings.

A small metal sheath slips between the shank of the ring and base of the finger to protect the person’s precious digit. 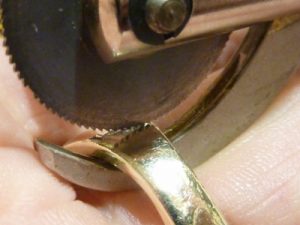 I turn the saw blade continually until the blade breaks through to the guard. I end up with a very narrow line through the gold. Since gold is relatively soft, as is silver and platinum, this works. With harder metals like tungsten or titanium, you need an electric rotary ring saw.

Next, I slide the saw over about ten millimeters or so and make a second cut. Then I remove the piece of shank that the two cuts have created.

Finally, I insert a “spreader” pliers tool—to spread the shank so it can be slipped over the knuckle of the finger. 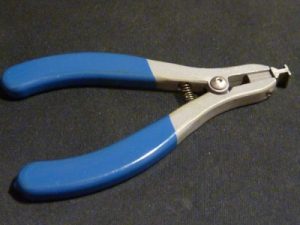 Afterwards, I measure the person’s finger so I can re-size their ring larger. If the person's finger was in distress before the ring came off, I'll put off measuring the finger for a week or so to give it a chance to go back to its regular size.

Given that the ring hasn’t moved from the finger in years, it’s usually scratched, dirty, and dull looking, as well. By the time I get done sizing, polishing, and buffing it, the ring looks sparkly and brand new. 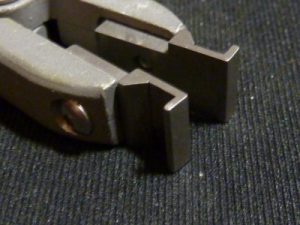 Earlier, I mentioned my favorite job as a jeweler was witnessing peoples’ faces light up upon seeing a treasured piece of jewelry that has been restored to pristine condition.

The great thing about sawing off rings—my second favorite job—is that I get to experience both my favorite and second favorite jobs as a jeweler. When I present that re-sized and beautified ring back to my happy client it's always a big smiley moment.

Is There a Cost to Having a Ring Sawed Off? 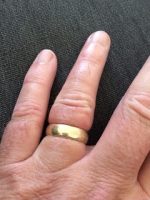 Don's Ring Before we Sawed it Off

In a recent discussion among jewelers, an informal survey  was done about the charges of ring sawing the various jewelers used. The biggest cost is time spent and replacement saw wheels.

Some large men's rings can badly dull a saw wheel when being sawed off. We agreed that two thick men's rings, sawed off could render your saw quite blunt and call for a replacement wheel.

Many jewelers charge between $25.00 and $50.00 to saw off a ring. Some charge more for a ring that would shorten the life of the saw blade. Other jewelers say they do not charge for sawing off a ring if the client uses them for the re-building work on that ring.

I recently did a video of sawing off a client's ring.

Why Do Your Knuckles Get Bigger When You Are an Adult?

This Ring Had a Butterfly Spring in it to Keep it From Turning, But a Calcium Deposit Formed and We had to Saw it Off

I was mystified why so many people had to have their rings sized larger when they hadn't gained any weight. A doctor client of mine said he thought that the ears, nose and knuckles kept growing, at a very slow rate. I never forgot that he said that.

As a 33 year jeweler I have sized an incredible amount of rings larger. The causes for these enlargements needed have included, finger sprains and other finger injuries, medication that causes swelling, spider bites where the swelling never goes all the way away, weight gain, pregnancy, weight lifting and stress on the fingers.

I've also noticed that many women who get married at 20 or so need their rings upsized in a few years when no weight gain has occurred. I'm guessing that they weren't completely done growing.

A great number of sizing jobs I've been asked to do are on people who have owned and worn their rings for over 20 years. Many have not gained much weight or mentioned any injuries. I tend to think that the good doctor knew what he was talking about.

Check out my video showing me sawing off a ring:

Great story Calla , thanks for sharing ! I have never been in a desperate situation to have a ring sawed off, but if I do, I know who to go to!
Congrats on your 100th blog, excellent!

Hi Calla! I was engaged in Maui and determined to have the ring fit. It was just a teeny bit small. I shoved it on and proceeded to spend the night tossing and turning with nightmares of Hawaiian paramedics cutting off my finger to get it off. We flew home the next day and I went straight to the jeweler who sawed it off and re-sized it. Funny thing is, a few years later, my fingers seemed to shrink (along with my waist) and I had it re-sized to the original size that Andrew bought it in. It has fit… Read more »

Anne,
Thank you for sharing your Maui story. You crack me up that you have shrunk in finger size and waist size. That’s so uncommon! But welcome, for sure!
I’m glad you found a jeweler who was able to help you quickly and efficiently. That’s a happy problem solved story!
Calla Gold

Calla-Congratulations on your 100th blog post and hurdling over that milestone.

I enjoyed this post and got a good chuckle out of your stories.

Alison,
Thank you for your congrats and feedback! My little 100th post is giving me a very fun day. I’m always happy to be chuckle worthy!
Calla Gold

These were great stories! I may call you one of these days to have my ring sawed off. It is nearly impossible to remove. And if I have you make me a pretty wedding band, my current ring will have to be taken off first!

Lori,
Me and my ring saw are ready when you are. “Have Ring Saw Will Travel!” But mostly I’d love to design your new wedding ring.
Check out my post on Mary’s Wedding Ring Re-Design: https://www.callagold.com/wedding-rings/jewelry-design-inspired-by-existing-designs-marys-new-wedding-ring-story/
Thanks for visiting, Lori!
Calla Gold

Congrats on posting your 100th post! I think you need a piece of jewelry to celebrate your 100th anniversary!

What a brilliant idea Kymberly, I adore it!
Calla Gold

Personal Jeweler to the Rescue again! I had no idea how many emergencies one Personal Jeweler would have to deal with. I have to admit I didn’t ever think about Jewelers sawing off rings. Thank goodness that Calla Gold Personal Jeweler is so creative and competent!
Appreciatively,
Lynn
Dr. Lynn K. Jones, Certified Personal and Executive Coach
http://www.lynnkjones.com

Lynn, Coming to the rescue is really fun. Yesterday thanks to this post I met a new client and sawed off her ring. She and three people were watching raptly and cracking jokes about sawing her finger off and the proximity to the hospital. I was laughing with them quite a bit. Therefore it took twice as long to saw off her ring. She was so happy and relieved to get it off. Her huge smile just made my day.
Calla Gold
Ring Sawer-Off-er!

Calla Gold I love your stories. And I have big knuckles. We gotta talk. Will you tell me more of your crazy jewelry life stories.

Lynn,
Call me, we’ll chat about solutions for making your rings work better with your large knuckles. I’ve got a couple good stories about ring saves with my large knuckled clients.
There was a lady who was pretty upset when her husband quit wearing his ring once he got arthritis on just his wedding knuckle. She said that was so unfair. I made him a hinge shank and he now happily wears it.
Your Personal Jeweler,
Calla

I have several pieces of jewelry that I would
like replated. I would like my first ring
which is gold over silver replated in GOLD.CAN THAT BE DONE: Could I mail it to you and
what is the address?

Eileen,
I can do this. Let’s have you email me for details. Email me at calla@callagold.com for my mailing address and arrangements.
Calla

Can I ask where you can get those shank spreading pliers? I have been looking all over for a pair.

Hi Mark,
I got mine at Rio Grande.
Calla Gold

Hello, I just read your article and as there were many responses, I thought I would add my two cents. I am 62 years old and my ring size has not changed in 42 years. I was married at 20 and that ring still fits. Oddly enough, my left ring finger is size 4 and my right ring finger is size 4.5. I recently broke my right hand ring that I have worn for nearly 30 years and I was worried about replacing it. I had a left hand ring and tried it on my right hand…which has never worked… Read more »

Hi Vernita, Your story is a really good one. I’ve worked with thousands of people over the last 32 years as a jeweler. I bet I have people whose fingers haven’t changed size. What I see day to day are the people whose fingers have changed, but it makes sense that there are those who haven’t experienced that. I’m a size five on one hand and five and a half on the other. That’s about one size larger than when I got married at 20. So I use my experience and my clients. I’m happy to add your experience to… Read more »