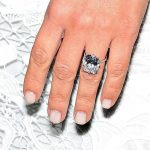 On November 4th 2011 I posted  "Kim Kardashian's Ring, Does She Keep it?"  It was written by my husband Jeremy who wanted to know what people thought about this question.

It got the second most comments of all time on my blog. There were great and differing opinions. I'll share a few later. But since we are interested in Kim Kardashian's New Ring, I'm back with a new chapter for Kim Kardashian ring followers. Like myself.

Designed by Lorraine Schwartz who designed her last wedding ring, her new ring contains a center diamond weighing in at 15 carats. It's a  cushion cut, D color diamond in a simple prong setting. 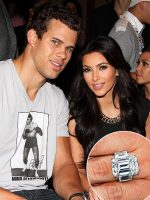 Kim Kardashian's Ring From Chris Humphries. That is Incidentally no Longer Hers.

Her ring from Chris Humphries sported a 16.21ct emerald cut center diamond. Her side trapezoid diamonds (2) weighed in at 1.8cts. It was muy ginormous!

Kim Kardashian's new ring from Kanye West has a 15carat center cushion cut diamond and probably about a carat of tiny diamonds on the thin and delicate shank.

My Opinion on the New Design 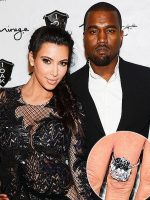 diamond. This hot cut style was a great choice. It's simple and outrageous at the same time.

From a comfort standpoint I'd guess the wider band on her Chris Humphries ring was less likely to twirl around.

Her new very narrow shank design ring is likely to want to spin on her finger. As a mom, she may find the super narrow band not as comfortable as a wider band. But she could solve that comfort issue and tendency to spin issue with her choice of a wedding band.

Did People Think Kim Should Keep Her Last Ring 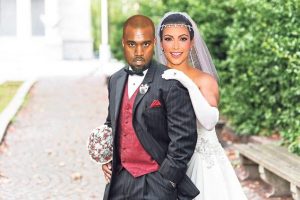 According to the comments I recieved 50% said Kim should return the ring to Chris, 30% thought she should keep it. And 20% said the lawyers should divide it as an asset.

My Favorite Comments from the previous Kim Kardashian's Ring, Does She Keep it? Blog Post:

Nicole said:
I agree with Jeremy, “a gift is a gift”. If it was a publicity stunt like Bobbi suggested, then they still knew what they were getting into and they went through with it. He knew he was buying an EXPENSIVE ring. They had it in their pre-nups, so they both knew what was going to happen if they split up. I also know that guys are generally happy to buy pretty women expensive things if it helps the guy out. I’m sure he had fun too, so he gave her a gift and it’s hers to keep. As for the idea of it being a reminder of the failed marriage, I don’t think she’ll care. She seems too materialistic to care if that $2mil ring came from Kris or Adam.

Let the Lawyer's Figure it Out

Whether the marriage was real or a publicity stunt goes to demonstrate the decline of society either way.
If the marriage was real, it’s a tragedy that it is ending so soon, or that it was not entered into with enough forethought.
If the marriage was a sham from the start, then we the public were duped.
The ring should definitely be divided as an asset of the marriage union.
But to me, I believe if it was an arranged union to be disposed of at the earliest possible moment, then they should return the wedding gifts that they were given in support of their life together.
It is also a commentary on how degraded our society has become that this is normal.

He gave her that ring as a symbol of love and commitment, something she didn't even try to work on. As beautiful as that ring is, I would do 1 of 2 things, give it back to him., OR ask him if they could sell it and donate ALL $$ to a worthy charity.
I would hate to look at that ring daily and be reminded that the whole marriage was a sham! Besides, if she can afford to buy a $75,000.00 pair of diamond earrings, she doesn't need the ring.

Both rings are beautiful in their own ways! They’re quite different. I think I prefer the first ring, though.

I’m with you. I love that luscious wide band with those awesome baguettes!

I think I agree with you Calla in your preference of Chris’s ring. It seems more her style- big and dramatic, while Kanye’s is simpler (but still outrageous, as you said). Calla, it was interesting to see what people thought about what should be done about the ring Chris gave to Kim Kardashian. (I just had to type it out, no matter how many times she marries she’ll always be Kim Kardashian!)
I loved all the updates on the saga of the ring Chris gave Kim in your earlier referenced blog post. There were a lot of comments!
Lisa D.

Lisa,
Thanks for writing. Kim Kardashian is endlessly fascinating. I love that you took the time to read the earlier blog post and check out the comments. I loved them, some were hilarious.
Calla