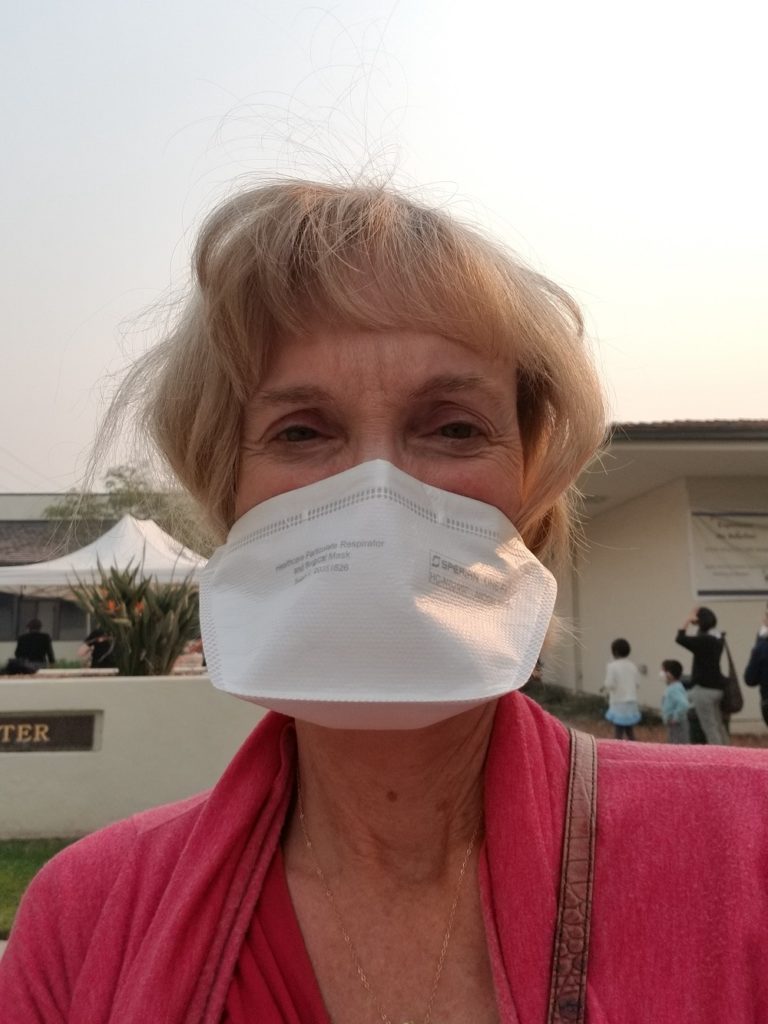 Wearing my face mask in smoke filled air including in my car.

Our hills burned from our neighbors in Santa Paula, through the hills of Ojai and to the coast in Ventura, with fire taking hundreds of homes as the high winds whipped this way and that unpredictably. Then the winds started pushing the fire into our direction. The march toward Santa Barbara had begun.

As we watched the news and stressed about the people we knew south and east of us who had lost their homes, we tried to keep working. I was headed into Christmas and had custom jobs, jewelry on layaway and people to see who wanted to get their wives the earrings or necklace of her dreams.

My story in pictures:

Watching the fire march down the mountains behind my house for eight hours. Nerve wracking. 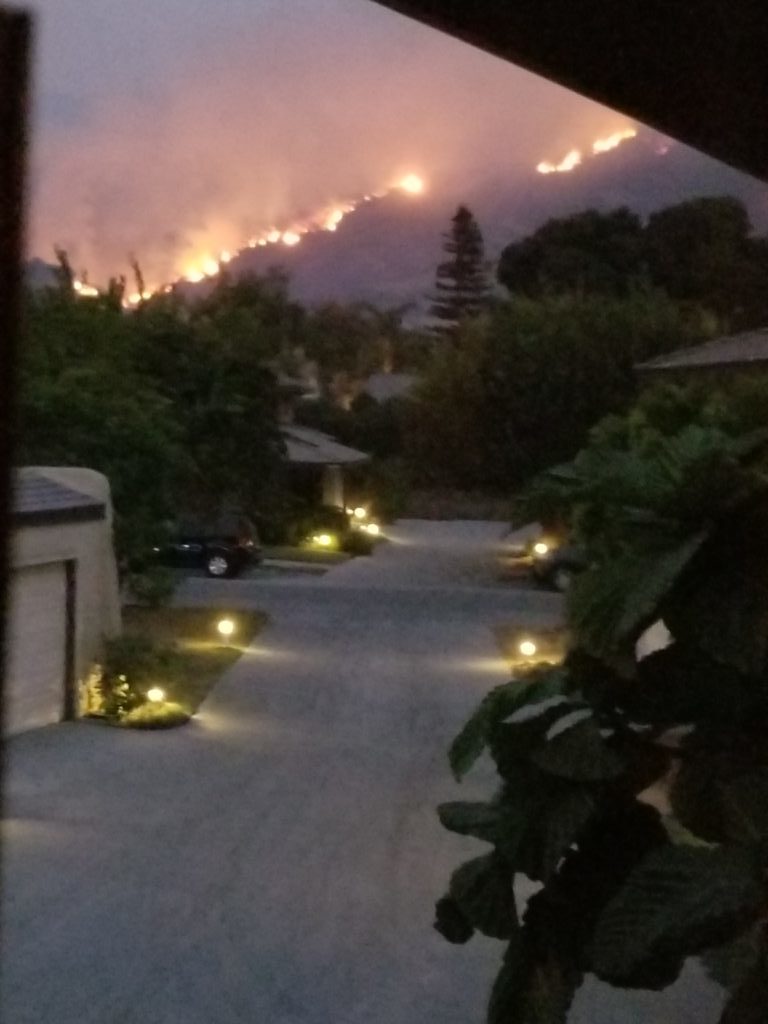 After sunset the fire came closer and closer. Fire trucks were everywhere, helicopters dumping water and men building fire breaks for hours. Looking out my window at the flames.

A map of the Thomas Fire. It was immense. The other fires were happening at the same time.

Flames visible from a town 40 miles away. 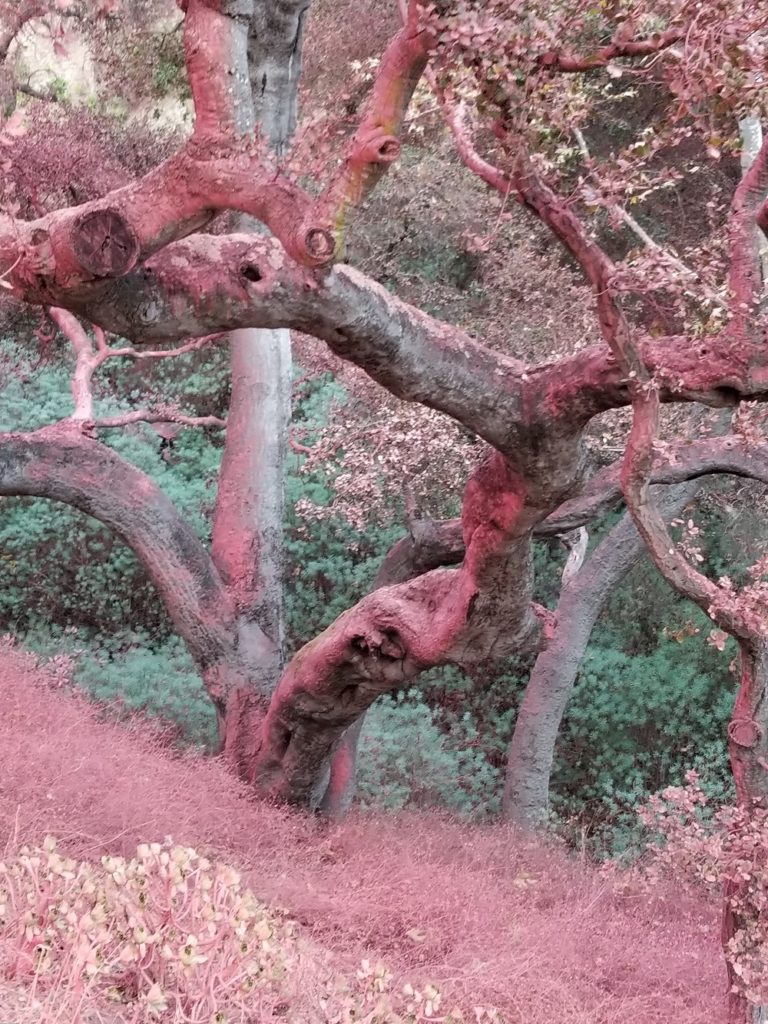 So much Phos-Chek was dumped to stop flames. These lovely old oaks were in the path of flames and were spared thanks to a timely Phos-chek dump from a helicopter.

I felt torn, I had to know what was happening. Every conversation with clients included the latest on the fire. We all had bad hair dents from wearing our masks. As I drove around I’d see people like me wearing them in their cars.

I wore less eye make-up as I cried with a client more than once a day. We were raw. Holding someone who is overwhelmed by what is out of their control was one helpful thing I could do. And boy did I understand. The fire was closer everyday to where I lived.

The search for an air purifier intensified. We found one and carried it room to room once I returned home.

My daily life felt like living in a post-apocalyptic movie. Poor visibility, few cars on the road, few people out of doors, the acrid smell of ash with each outdoor breath until you couldn’t smell it anymore. Ash was everywhere lending a dull grey to the landscape. The only people on the street wore masks, unless they were insane, (in my opinion.)

This was normally an incredibly busy time for me. It was eerie. I’d make calls to make deliveries or give progress reports on custom projects and we’d inevitably swap fire stories while figuring out our next appointment.

With my Christmas deliveries done, my visiting family shoehorned into guest rooms, couches and etc I did my final wrapping of gifts.

The fire had done its worst, burned homes mere miles from where I lived, stopped less than a mile from my home and moved into the trackless back country where it burned through the acres day and night, racking up the #1 position for largest fire in California since they recorded them.

The wind had come and blown away most of the lingering ash and it seemed life could almost go back to normal. I thought we were done. Little did I know that the fire which had denuded our hills didn’t spell safety. Only safety from fire…Tune in next week for being a jeweler after the flood.