This is Part 2, the flood. Read Part 1. The New Year had come and gone. The fire was no longer near us. The street sweepers had cleaned the last ash piles away and a breeze no longer meant that it suddenly smelled like an ashtray.

I was picking up engagement rings to be sized, New Year's Resolution jewelry to re-design, changing chain sizes and generally having pleasant New Year's appointments. The sun was shining and all was well.

Except for the news that a big storm was headed our way. Suddenly we were glued to the news. Where a month ago it was all about face masks for smoke and ash, it was now about sandbags and if you were in an area that needed them.

Maps showed up on the news, showing creeks and neighborhoods and differing levels of threat from the burned mountains above.

Some geologists suggested the sky was falling. After being evacuated because of the fire for two to three weeks, some people had just come home and didn't want to leave.

The new evacuation for a potential mud flow was met with some fear and some skepticism and some apathy. Luckily I wasn't in a danger zone. I hoped. Though I was near a creek.

The pounding rain that woke us up at 2:30 or 3am that morning was frightening. It just pounded down relentlessly. Standing at the bedroom window I stared into the night. A light down the way let me see the rain, thick and unstopping, creating a wider and wider pond as it sluiced down our driveway.

Our cable went out and we had no news. I found out first on my cell phone on Facebook that there had been multiple mudslides in Montecito, mere miles from us, taking homes from foundations and there were missing people. 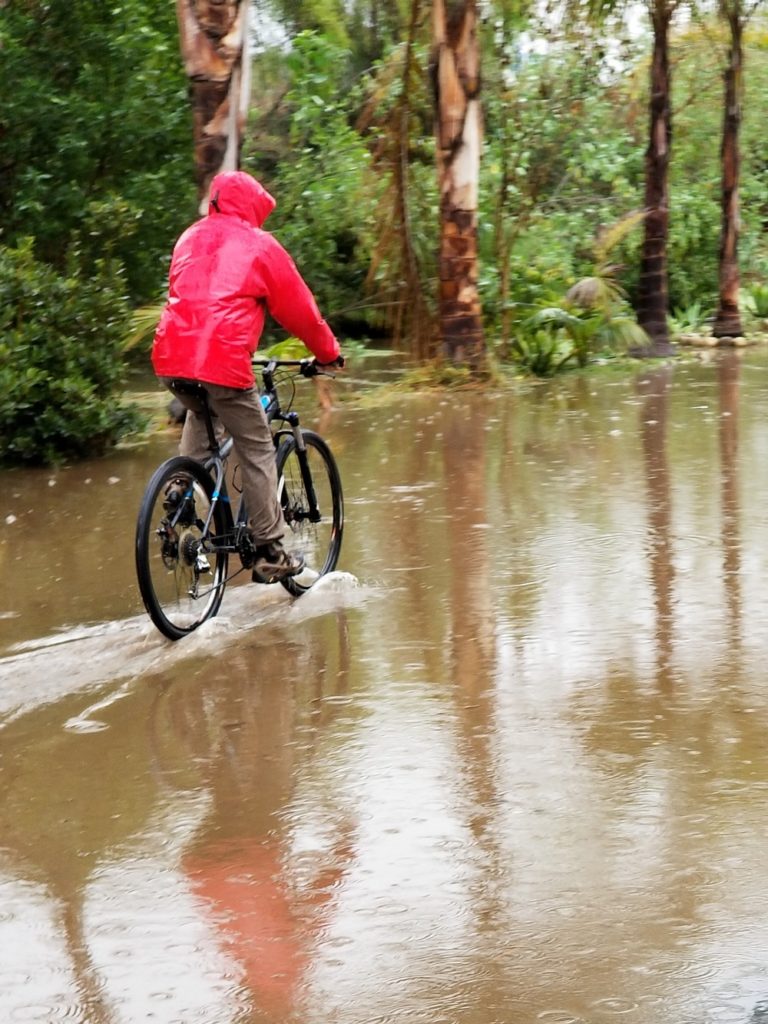 We rode our bikes in the now light rain, staying out of emergency responders way to see friends and get a sense of how our little town had done.

Creeks Overflowed Their Banks, Went Down Streets and Poured into the Low Section of the 101 at Olive Mill Road

A Coastal Campground in Carpinteria just South of Montecito was Flooded.

Chocolate Waters at the Beach Tell of Massive Amounts of Mud

The mud on our section of freeway would have shut it down if Montecito's massive mud flow hadn't done so already. But we've had mud on our freeway before and it wasn't a huge deal. Not like Montecito.

Once we knew we were safe and had a number of days with no wi-fi, I was going stir crazy. Luckily we could see news at our neighbor's house who had a satellite dish.

I started to feel bad about the two young ladies who had gotten engaged, and days later given me their rings to be sized and then this happened. I wanted to get them their rings back. But we were separated by mud.

A few days later the Amtrak repaired their lines through Montecito and I decided to make the trek. It was easy to have 200 people turned away because the demand on the trains was so enormous. 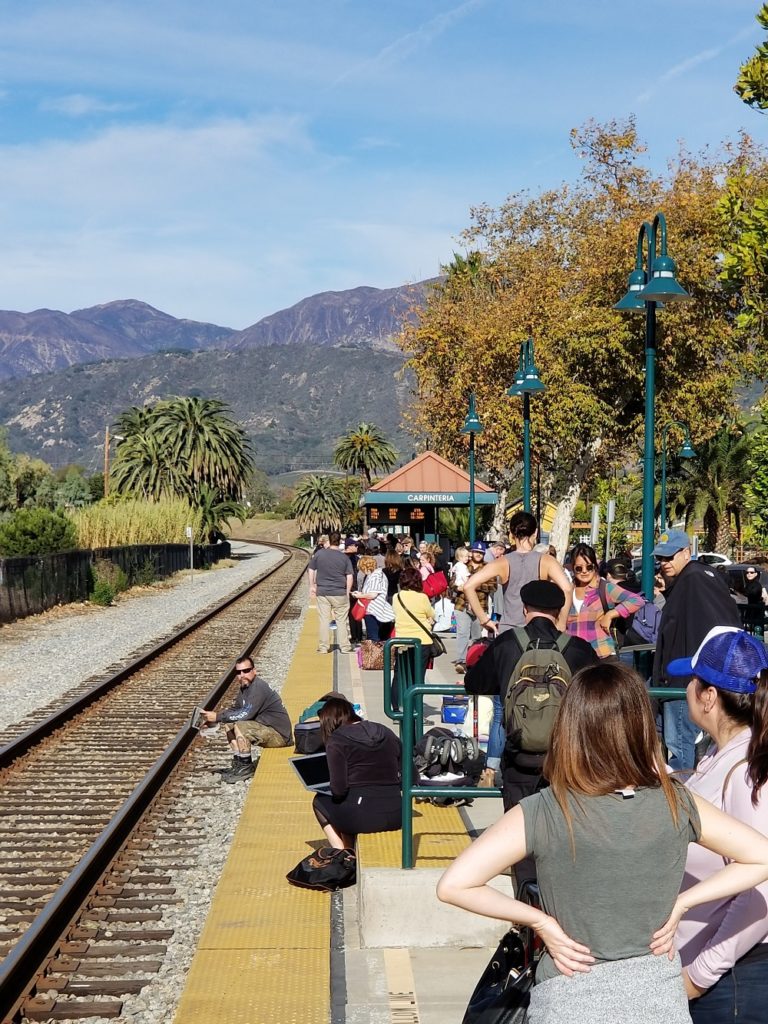 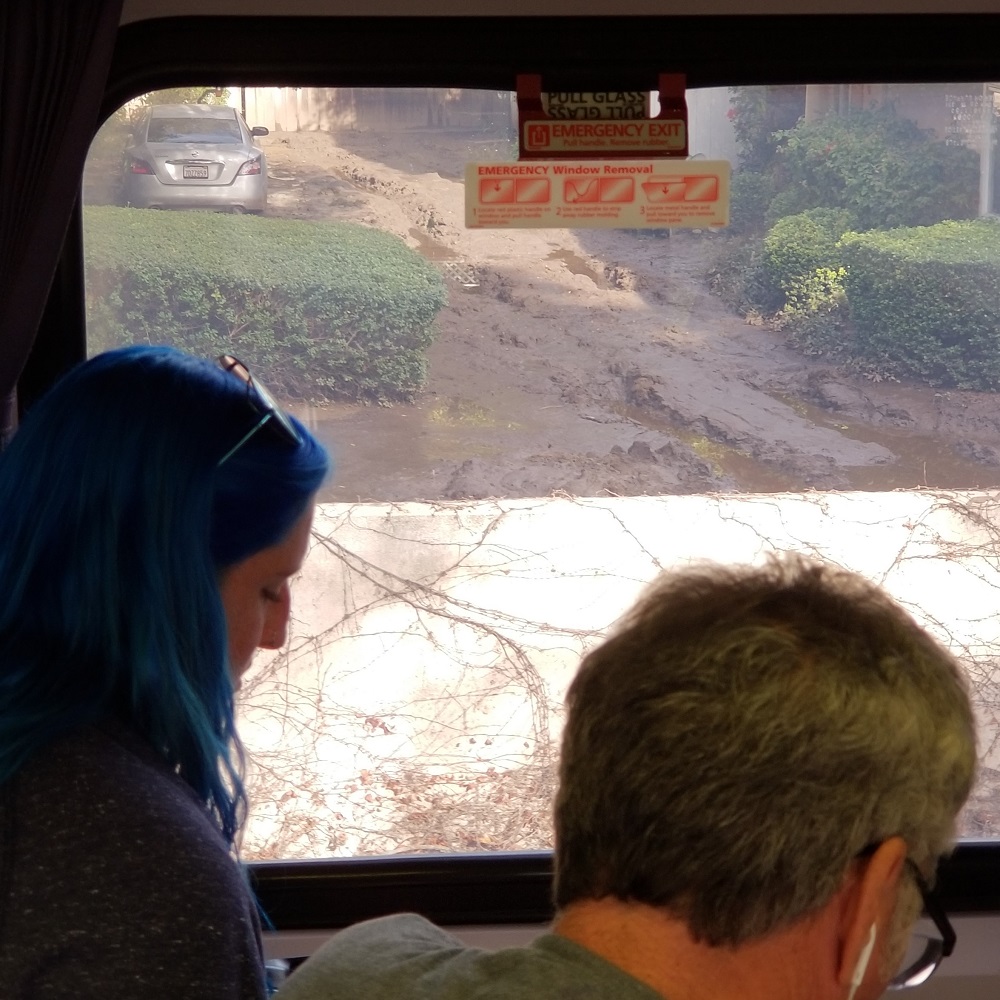 I decided to go on a Sunday, rent a car once past the freeway stoppage, stay a few days with my friend Christine and see clients. I made it on the train on my first try. And even on Sunday the amount of people going was huge.

The rains devastated Montecito. The flood and its effects were enormous. The amount of mud on the freeway was unreal.

The most moving thing was how kind everyone on the trains were. People helping moms with multiple kids, people holding packages for overloaded passengers and one group of people shepherding elderly toward seats and able bodies passengers jumping up to offer their seats. I cried and some other people did at the kindnesses extended and strangers asked each other how they were doing. Caring about the answers.

Life was getting back to normal in Santa Barbara, sort of. Many businesses were closed because Amtrak couldn't bring everyone who wanted to come to Santa Barbara in.

It only worked if you could stay the night for a few nights like I did and rent a car. Not that you could be guaranteed to get a rental car. I got lucky. I stayed for the vigil for the fallen and cried some more. I thought I'd never feel carefree again.

Chelsea was so Happy to Get Her Sized Engagement Ring Back

My clients were just wonderful. And it was a pleasure to see them and dive back into being a jeweler. My clients and their happiness with their jewelry lifted me out of my low point. 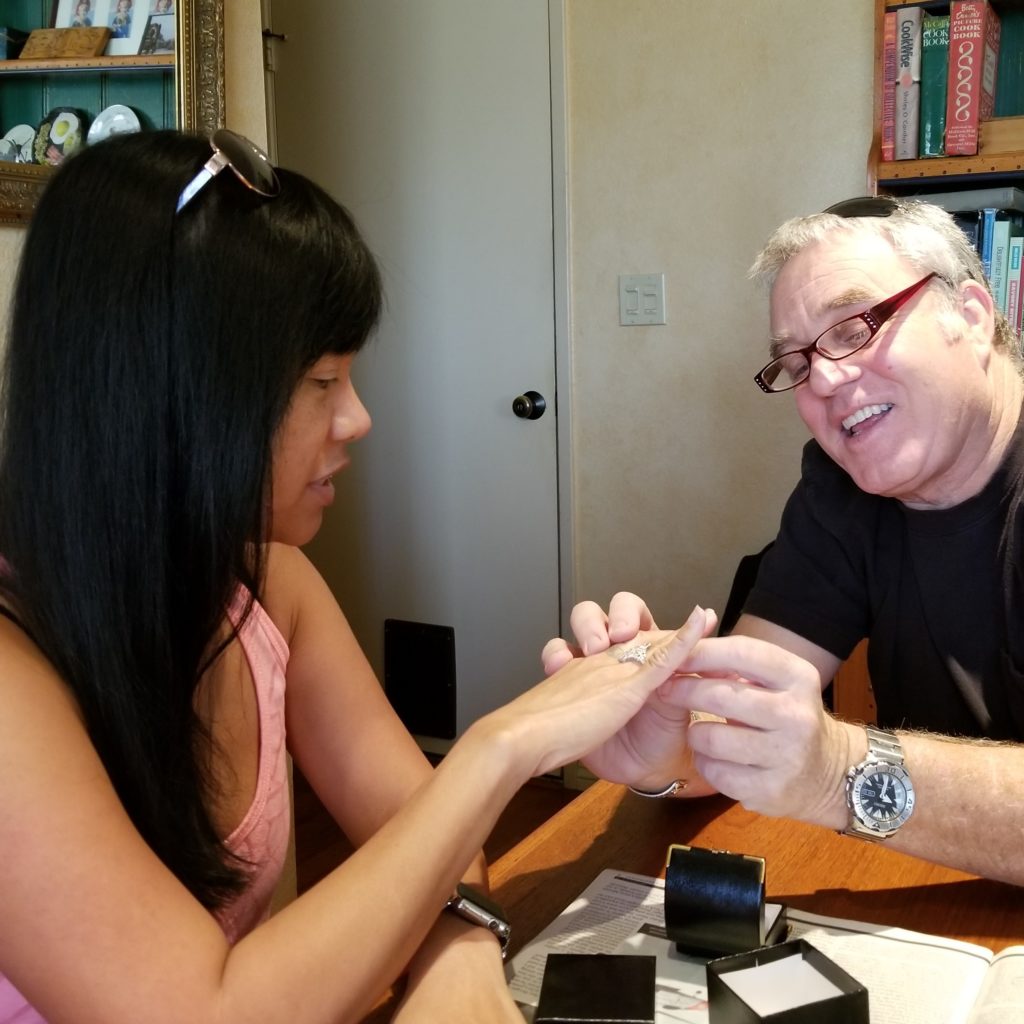 My clients lifted my mood greatly. Disasters happen and the closer they are to us the more we grieve. But getting back into your routine can be a healing activity. I learned first hand that work can be very cathartic.

I am grateful I was in the middle of a number of projects when this flood happened. When I picked up the threads of my shattered schedule, I had this life I am so grateful for to come back to.

God bless you. I’m so glad your life and business are somewhat, if slowly, returning to normal.

Dear Nancy,
Thank you so much for your caring thoughts. It is amazing how discombobulating this double whammy has been. I am looking forward to a more normal life. It’ll get there.
Your Jeweler Friend,
Calla

It is so difficult for people outside of SB to grasp the magnitude of our collective sorrow from these events. Thank you for putting into words the impact to our lives and our need to have the “show go on”

Dear Sherrill,
I’m so happy to get your comment. As a local person you know how disruptive, sad, eerie and just unbalancing this has been. My neighbors have kids. When I have had too much in my head dwelling on what’s going on I go out and play with the kids. They are smiling, laughing and just living life. It reminds me that I need to ‘get back to life’ too.
Thank you,
Calla

So glad you see the value in getting back to ‘the everyday round’ in the midst of chaos. What we often think of as ‘routine’ can be our saving grace. Kind thoughts going your way from Ottawa, Canada.xx

Dear Allison, Hello in Ottawa, Canada. I adore Canada, having vacationed there three times. Hmmm, maybe I’m due for another Canadian vacation. Thank you so much for understanding how I’m so excited to get back to my ‘everyday round’ of work. Even though the commute is taking twice as long, having the freeway open is a real happiness to me. I’ve seen how getting back into the routine has been a saving grace for many of my friends. None of us are complaining about traffic, work or really anything. I feel the preciousness of my life. I’m feeling grateful daily.… Read more »