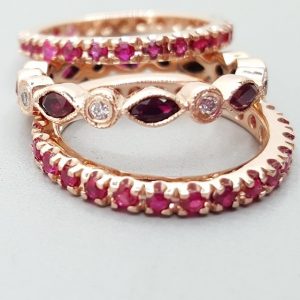 Mother Nature never made rose gold. Chance, early metal mixing societies, and the fever dreams of adventurers, gave us the subtlest of gold colors. Rose gold or pink gold is a beautiful color of gold, that on the right skin tones, glows with a warmth. This color of gold elevates some gemstones like no other metal color. It is also a wonderful color to use in combination, for dramatic designs.

How is Rose Gold Made?

Pure gold, or 24 karat gold is too soft for jewelry making, so harder metals are added to it, called alloying, to give it strength, and in the case of rose gold, color.

To create rose gold, one recipe of gold and alloy metals is:

The copper gives the yellow gold its pink to red tone. The more copper that is added, the more red, the tone of gold will look.

How Did Romans Get Rose Colored Gold Coins?

Pink gold has quite a long history. Starting in the time of the Roman Empire, where some of the gold coins, were a reddish color instead of golden yellow. This hue was caused by impurities present in the gold during the making of the Roman coins. That instance of ‘rose gold’ was unintentional.

Rose Gold and the Columbians

The next rose gold usage, was found by archaeologists in South America. They discovered a preference for the red gold hue in the Nahuange period, AD 100 – 1,000, in the Sierra Nevada de Santa Marta mountain range in Columbia, near the Caribbean coast. Artifacts in Colombian museums showed that skilled metal workers from that time period, could create red and orange metal colors as well as bright yellows, using gold, copper and other metals.

Their preference for the red hue is shown in many of the recovered artifacts from archaeological explorations of Columbia and the Caribbean.

England’s Henry VIII in 1526 introduced Crown Gold, a 22kt red gold. This would have been a very red, as opposed to pink, hue of gold. Also, this would be a very soft gold. This high karat of gold with a great amount of copper, would not have been appropriate for daily wear. It would have worked well for Royal soirees, and the unblemished hands of the aristocracy. Undoubtedly the Royal Court, covered their decolletages and hands in Crown Gold.

Creating a premium, rose gold for the use originally of the Royals, no doubt was much copied, likely in lower karat versions of rose gold, by the merchant class of the time.

Rose gold had a part to play in the beautiful and intricate quatre-couleur (four color) jewelry. This distinctive design, used layered, different colored gold elements, to create often botanical details, on bracelets, snuff boxes, and other jewelry items. The mixing of gold color technique had been used earlier, but it was refined, elevated and popularized by the French around 1750. The most famous jeweler creating these pieces, was Jean Ducrollay.

Quarte-couleur designs were created using green gold, white gold and pink gold over a base of yellow gold. To help the eye visually differentiate between the hues of gold, hand engraving or chasing, were used to decorate each layer. This created a textural look, enhancing the three-dimensional nature of the layered designs.

Rose gold was part of many multi-colored gold eggs created by Peter Carl Faberge, of the renowned Russian jewellery house, the House of Faberge. They made jeweled eggs for the Imperial Family of Russia from 1885 to 1916. The most expensive Faberge egg, was commissioned by Tzar Nicholas II for his wife Empress Alexandra. It was made in pink gold.

All through the 1800’s, red gold was such a popular gold color in Russia, that some people in other parts of the world, called rose gold, Russian gold.

Queen Victoria Following the Lead of the Russians?

To a lesser degree pink gold was popping up in Early Victorian wedding rings in the 1837 – 1860 time period, during the reign of Queen Victoria.

From Fever Dreams, an Enduring Place for Rose Gold 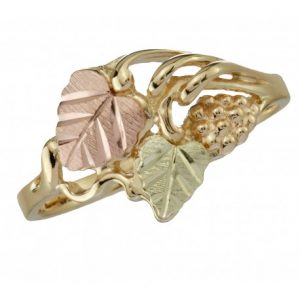 Pink gold’s appearance in America, came thanks to the thirsty, near starving, dreams of a French goldsmith, Henri LeBeau, in South Dakota in the 1870’s. Gold had been discovered in the Black Hills. LeBeau’s fever dream, included imagery of leaves, grape clusters and vines. To create this popular and unique at the time, jewelry, he used his skill at alloying metals, to create red, green and white gold, from the gold found in the Black Hills, of South Dakota. His vision led to the creation of the distinctive designs using a yellow gold base, decorated in rose, white and green gold, in rings, necklaces and earrings. 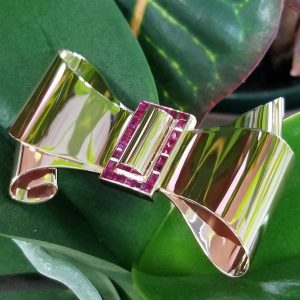 For the first time a larger group of women than ever before, had joined the workforce and were earning their own money. Choosing what to spend their money on, for their decorative personal statements, many women rejected the smaller, highly feminine designs of the past. A great number of women embraced the bolder, more forward and strong looking, post war retro jewelry designs. Rose gold, was the ‘different’ gold, and women, feeling their power, embraced it. 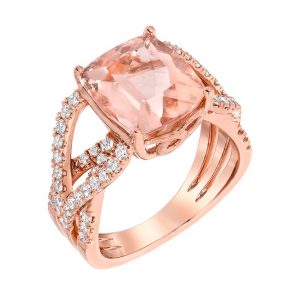 The current popularity of rose gold, fueled purchases of iPhones, watches from Michael Kors and even Birkenstock’s rose-gold version of its classic Arizona sandal. This love of pink is mirrored in the surge in popularity of pink gold jewelry. In the engagement ring world, pink gold is very popular, especially in vintage looking designs. 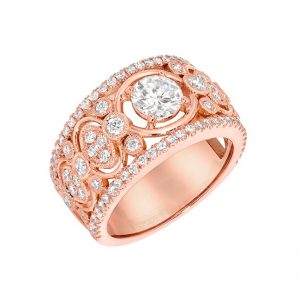 Rose gold is used most often, paired with diamonds and colored gemstones, like morganite and kunzite, as opposed to gem-free designs. If you’re considering using pink gold in your ring design, check out the design advice in my blog post, Rose Gold, the Blushing Gold.

This is Super-Interesting. I never thought there would be such an interesting history of Rose Gold.

Hi Marie,
I found it super interesting to go back down history lane to find out about this too. I’m glad you liked it.
Your Personal Jeweler,
Calla

Hi John,
Thanks for the short and sweet comment.
Calla