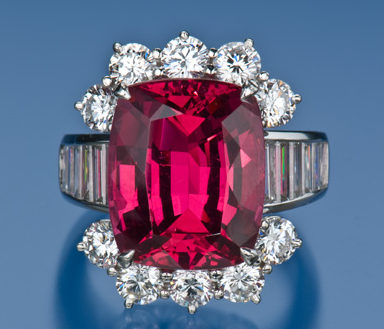 Exciting news to everyone with an August birthday – spinel is now one of your birthstones!

The American Gem Trade Association (AGTA) and Jewelers of America (JA) decided in June to include it with August’s birthstones.

It joins sardonyx and peridot on the official list of August birthstones.

JA’s president and CEO, David J. Bonaparte, says, “At certain moments in history, when there is a strong call from gem enthusiasts to expand the list of official birthstones, Jewelers of America believes in recognizing the importance of historically significant gemstones and giving gemstone lovers a choice that suits their preferences.”

Choice Is a Wonderful Thing

The Many Colors of Spinel!
Courtesy of gia.edu

August is now one of only three months represented by more than two gems. Although sardonyx and peridot are beautiful gems with their own unique features, maybe they just weren’t your thing! Here’s why you should love spinel.

Spinel can be found in many colors. Although vivid red is generally the most desirable color, it can also be cobalt blue, bright pink, bright orange, lavender, black, violet blue, greenish blue, grey, mauve, yellow, and brown. Having so many choices means that you can find the perfect gem to fit your style!

The “Black Prince’s Ruby”, Located In the Center of the Crown, Is Actually Spinel!

The GIA calls spinel a good candidate for “History’s Most Underappreciated Gem.” Several of history’s most famous “rubies” were later identified as spinel. In fact, two of the crown jewels — the Black Prince’s Ruby and the Timur Ruby — are large spinel gemstones!

Spinel is a hard and durable gem, right between quartz and rubies on the Mohs hardness scale. Its octahedral structure sets it apart from other gems and gives it a beautiful depth. It is found most commonly in Sri Lanka, Afghanistan, and Burma (Myanmar), but deposits of it have also been found in Vietnam, Tanzania, Kenya, and Madagascar.

I personally love it and having it as an official birthstone is happy news for all August babies.

So interesting and a beautiful stone! I had no idea months had more than one birthstone each! Very cool.

Hello Stephanie,
A number of birth months have multiple birthstones, like December, my month, with blue zircon, turquoise and tanzanite. And June with alexandrite and pearl. I love choices. Because we’re all different!
Your Personal Jeweler,
Calla

Informative article. I used to know that greenish blue is the most desirable colour.
Can you advise what gems will be popular this fall and winter 2016/2017?

Hi Valeries,
I think greenish blue is beautiful at any time. The colors for fall and winter 2016 and 2017 are earthy with a pop of peridot green and orange sapphire.
Your Personal Jeweler,
Calla

I’m one of the August babies. I have a jewelry box full of peridot jewelry from my childhood. Evidently birthstone gifts were all the rage. Unfortunately.
I have I guess pinkish skin and I look dreadful in the light yellowy green that is peridot.
This news is fantastic. I’ve always loved red gems, so if it’s good enough for the crown jewels, spinel is way good enough for me.
Do all jewelers carry a nice selection of spinel?
Is it a usual thing to add birthstone choices?
This is my kind of good news.

Hello Devorah, I’m so pleased that you will benefit so much from this great birthstone news. Run don’t walk and get thee some spinel! Not all jewelers will have a great selection. I’d call first to see. Spinel isn’t as plentiful as gemstones in the quartz family like amethyst and citrine. But it is worth the time to find good examples. Like any gemstone there are differing qualities and you want the bright good ones, so be picky! The last birthstone addition, (December) was tanzanite a pretty bluey purple. It differs from amethyst the February birthstone which is amethyst because… Read more »

Who knew they could so easily add birthstones! How exciting for all August babies, me included! I feel so special. Do you know why exactly it was added? Or how it was chosen?

Hello Jennifer,
I’m so happy for you because you are an August baby. This news is fantastic. I know that AGTA gets petitioned to elevate a particular gemstone to birthstone status. This immediately causes the chosen gemstone to be lifted out of the usual wallflower status it had and brings it into the limelight. I don’t know how they go about it.
The last gemstone to get elevated was the tanzanite which was given to us lucky December babies.
Your Personal Jeweler,
Calla