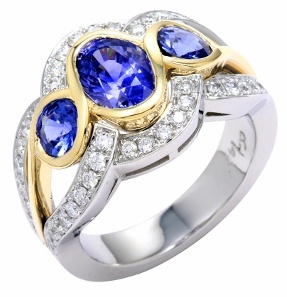 Many people don’t know that rubies and sapphires belong to the same gem family, which is called corundum.

It’s All in the Family

Fun Fact; the source of the name sapphire is the Greek “Saphiros” which means blue. When they figured out that ruby was a corundum they gave it its own name from the latin Rubeus which means red.

So Many Sapphire Colors

Check Out all the Colors of Sapphire on this Skull Ring

Nowadays “sapphire” is the term used to describe every color of corundum other than red. Red corundum is always referred to as “Ruby.”

Once all the other colors of corundums were discovered and gained popularity it was decided to use the word sapphire with the color in front of it for each color of corundum.

So when you ask for a yellow sapphire you’re really saying, “may I have a yellow blue?” I love that little bit of jewelry trivia.

Corundums come in all different colors, ranging from yellow, orange, pink, and red, to violet, purple, and blue.

Chemically speaking, sapphire and ruby are both aluminum oxide. It’s the trace elements that give them their diverse colors.

Sapphires use Names of Their Origins, too 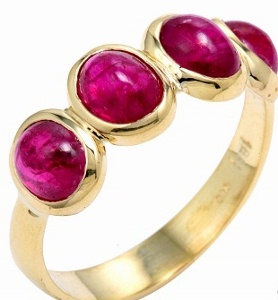 Rubies and sapphires can also be categorized by their origin. Ceylon sapphires come from Ceylon (even though the country is now known as called Sri Lanka).

On October 7th, 2016, President Obama signed an Executive Order, effectively removing all sanctions on the importation of gemstones from Myanmar. It is now legal to import all gemstones, including ruby and jadeite, from Myanmar.

Are There Sapphire and Rubies born in the USA? You betcha

While Rubies and Sapphires from Sri Lanka and Myanmar often appeal to those with an exotic nature, the ​Vortex mine in Montana​, is a great American source of Sapphires, which it produces using green mining techniques.

These little beauties, referred to as “Yogo Sapphires,” have come across my desk many times.

The hardness of a gemstone is a very misunderstood property. The word “hardness” in gemology differs considerably from its everyday usage. The scientific definition of hardness in gemstones refers to its ability to resist scratching, and nothing more.

On the Mohs scale (gemstone hardness scale), Corundum has a hardness of 9, second only to diamond with a hardness of 10. Because rubies and sapphires are so hard and resistant to scratching, they make great choices for all types of jewelry exposed to everyday wear.

This unique wearability factor, combined with their rarity and brilliant colors make rubies and sapphires some of the most valuable gemstones.

There is a rainbow of Corundum waiting for you. Ready to bring some color into your life?

Sapphires/ Rubies have always been my favorites, waaaay above diamonds as I love color. Even colorful comments! Even more than that, I love etymology so thanks Calla Gold for sharing the info about Saphiros. Those Greeks keep contributing to our lexicon!

Kymberly, I welcome your colorful comments any day. I’m an etymology nut too. It’s great to know someone liked the word sources!
Calla Gold

This was full of interesting factoids. Especially that about Mohs scale! Well, I am certainly a fan of sapphires and rubies…but now I know more about them than most! Thanks for the info share! Great stuff.

Dr. Jones, I’m happy you enjoyed my factoids about Rubies and Sapphires! I love that Sapphires and Rubies are related too.
Calla Gold

The blog was really informative and added more to my knowledge.

Hello Alexander,
Thank you for letting me know!
Your Personal Jeweler,
Calla