I said, "I do both and banana split engraving." (She had called me after finding me on the internet and she sounded fun.)

"Guilty as charged. What are you looking for?" I said.

There we got into a conversation about the fact that she wanted to do something different.

"Everyone does letters, but my neice's real name is Irvina. And all the 'I's' look lame. So I don't want an 'I'. She just flat out won't wear it. She goes by Vina, but her folks hate that. So doing a "V" is out of the question." She said.

"What if we do a symbol or animal or something? It worked for Prince." I said.

"Vina does love hummingbirds." She said.

In that moment we found Vina's signet ring decoration.

What Will I Cover in This Signet Ring Engraving Post?

In this post I'll show examples of different lettering types on many different signet rings and hope to inspire you to spend a bit of time and pick a font that you really like. That will make your signet ring or the signet ring gift more special.

A Bit About Engraving - There are Three Types

B is Engraved by Hand Engraving. Lines go Narrow to Wide.

I drill deeply into the three types on my blog post: Engraved Rings, Five Things You Need to Know

Briefly there are machine engraving, hand engraving and laser engraving. Each one is covered in the above post. I'll label the pictures in this post by what method was used to help you know how that effect was achieved.

The Steps to Choosing How to Engrave Your Signet Ring

Tattoos and Your Ring Design 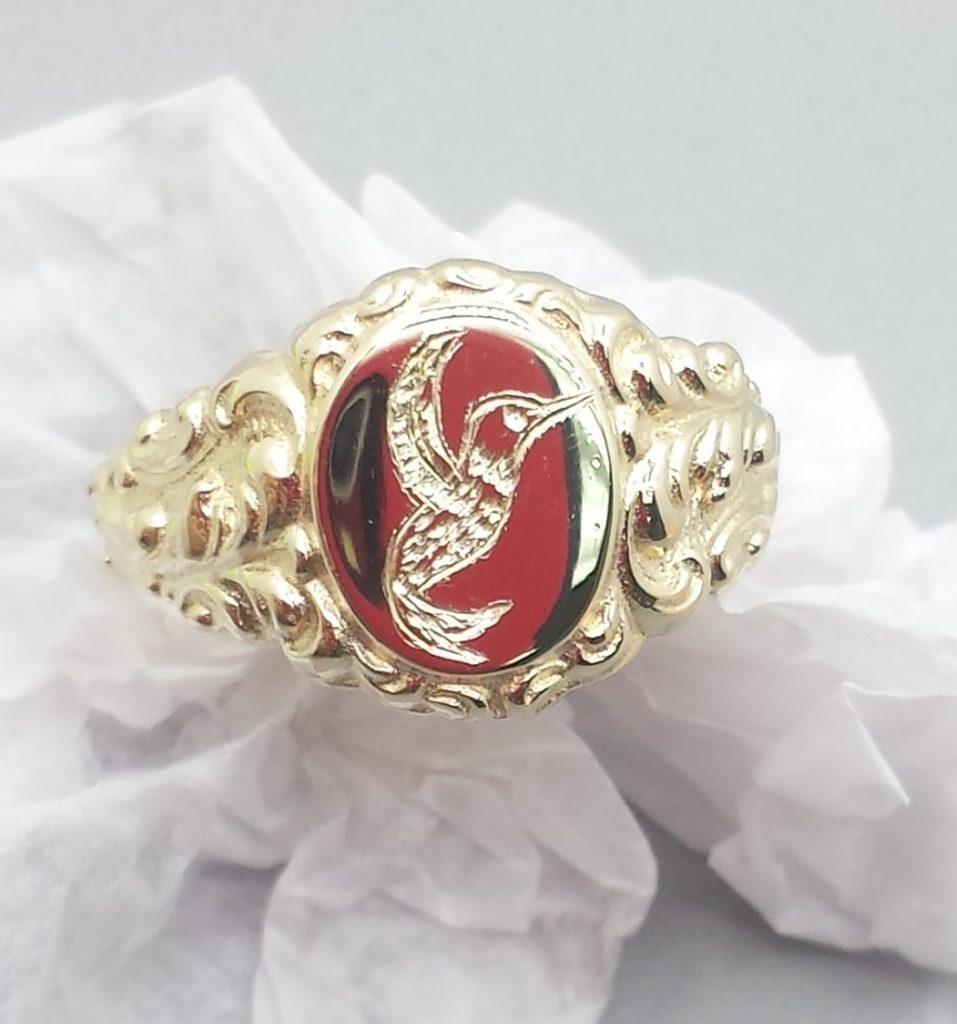 You can be like Rashida and engrave a hummingbird or a favorite symbol on your signet ring.

One way to search for  symbols is to do a Google Image search for simple tattoo ideas or wood cuts in the area of your interest.

Keep in mind that too much detail is the enemy of engraving. You want the image to communicate and too much complexity can make it look like a mysterious blob.

If it is simple enough to tattoo or do a wood cut it'll probably be simple enough to show up well on a signet ring. Considering how complex tattoo are is these days I should say only look at simple tattoos as examples of what you want.

Note How Deeply the Lettering is Etched into the Surface of This Signet Ring. That's Hand Engraving.

Generally speaking when you have a monogram engraved the last name letter is in the center. The first initial is to the left and the middle initial is to the right. When engraving monograms the choice of font makes a huge difference in how it looks. Fonts have personalities all their own.

This Signet Ring is Engraved by a Hand Engraver. Notice the Varying Width of Each Letter.

Have fun Finding Your Font Personality. Note that scripty fancy fonts tend to give an old vintage look and can be used by men and women.

This is a Vanilla Engraving. Simple Machine Engraving of One Letter.

With machine engraving you need to choose a font that they have the template (pattern) made up for. Because machine engraving has certain fixed font patterns available and is not hand done, it is less expensive than hand engraving.

Machine engraving tends to be less deep and has one even width as opposed to narrower to wider in the same letter that you can get with hand engraving.

Laser Engraving of Initials. The Black is From the Burning of the Laser and is not Permanent

Laser engraving is highly precise as it is controlled by a computer. A computer operator programs in the font you want and the size and programs where the engraving is to take place.

Jordana's Kiss Inside His Wedding Band

One of the variables is the dwell time of the laser beams. The deeper you want the engraving, the more dwell time is needed. It is this controlled dwell time that makes laser engraving the only engraving option for titanium and tungsten and super tough metals.

Vanilla or Chocolate, How Wild do You Want to Go?

Now you know the techniques, time to search for what you really want your engraving to look like.

May your signet ring look perfect for you,
Calla Gold

More Posts in the Engraving Series:

Signet Ring, What Should You Engrave? Vanilla or Chocolate?

Love the tattoo rule! Clever, and a good visual.

Hi Alexandra, I’m glad you like the tattoo rule. I have found it most helpful. Figuring what to engrave on your signet ring can be challenging. Sometimes a client wants to do a monogram with four letters or an image that is way too complex. Some choices need to be revisited. In the case of four letters, odd numbers of elements always look better than evens. That client went with three and it looked great. The recipient never noticed or cared that the second middle name initial wasn’t in the monogram. We did a very flowy style of script engraving… Read more »

Rashida does sound fun. I’m glad that you shared so many pictures of the different types of engraving available.
I was especially interested to see the laser engraving and the flexibility that it offered.
I have a friend who has a fingerprint inside her wedding band.
Did she use laser engraving for that? And how do they get their fingerprint to the engraving anyway?

Hello Sue,
People ask me now and then for a fingerprint to be engraved in a wedding band. I use laser for that. As to how I get their fingerprint I go over the steps in this blog:
https://www.callagold.com/wedding-rings/laser-engraving-a-kiss-inside-a-wedding-ring/
That’s a good question and I’m glad you asked it.
Your Personal Jeweler,
Calla