Every once in a while, I get asked if silver is appropriate for wedding rings. Silver certainly isn’t the customary, go-to metal, but is it appropriate? Depends on one’s point of view.

Traditional Metals are Gold and Platinum

Platinum and White Gold Rings Make up This Wedding Set

90% of all wedding rings are made out of gold or platinum. Yeah, I made that up. It’s 100% for me, but I know other areas of the country embrace other alternative metals. Gold and platinum are the traditional, time-honored, and accepted metals.

No other substance comes close. No other metals are so intimately connected to the bond of marriage than these.

Over the years, gold and platinum wedding rings have come to symbolize the union between husband and wife. It’s almost as if these metals strengthen the connection between the two, like some sort of talisman or good luck charm. As long as they wear their rings, their marriage will endure.

The Hardness of Silver vs. Gold and Platinum

Silver is a soft metal. Which means it wears down much faster than platinum or karat gold. This is especially critical with settings that hold precious gemstones.

Most platinum rings are 90 to 95% pure platinum. The metal is hard enough in its natural state without the need of much alloying for jewelry making. 14 karat gold is alloyed and hardened with 58% alloy metals as it is naturally softer in its pure state. It is a wonderful metal to work with for jewelry making.

Casting Issues with Silver vs. Gold and Platinum 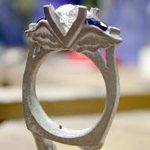 Silver rings tend to show more porosity than gold or platinum. Porosity describes tiny pits inside and on the surface of jewelry. These happen during the casting process are due to poor casting techniques or bad luck.

Casters have a harder time dealing with silver than they do with gold and platinum. My purpose isn’t to bore you with lots of technical jargon explaining why this is. It just is. Trust me.

Tarnishing  of Silver vs. Gold and Platinum

Silver tarnishes. Gold doesn't tarnish. And platinum doesn’t either. Again, I won’t bore you with lots of technical analysis of why this is. It just is.

A man named Joshua in Kentucky called a while back who wanted to create a custom wedding ring. I told Joshua the design and waxing would cost about $500. Setting the diamonds would cost another $150. The diamonds were the big expense and would set him back around $5500. Casting the ring in 14k would cost about $800. Considering what he wanted, my pricing was very reasonable.

He called back a day later—had probably been talking with his banker—and asked if we could save money by casting the ring in silver. I explained about the metal’s inherent softness and habit of  tarnishing. Setting his beautiful diamonds in $50 worth of silver would not be a good idea. Unless of course, he didn’t mind replacing them every couple years or so.

Joshua chuckled and said, “You had me at tarnishing, but I was enjoying the ride.” We cast his ring up in 14kt white gold. Later, he emailed me pictures of the beautiful ring on his beaming bride’s finger.

He added that she’d just about flipped-out when he’d originally suggested they make the ring in silver. “Are you out of your frikken mind, Joshua?” she’d said. “I’m sorry, honey, but no way are those diamonds running around the rest of my life in silver.”

My Opinion on Your Best Metal Choices for Your Engagement Ring 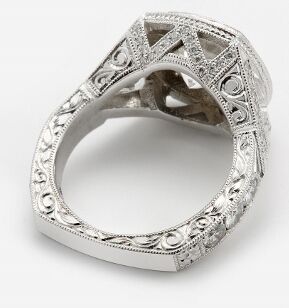 I recommend white gold vs silver or platinum vs silver wedding rings. They’re harder—the better to hold gemstones—don’t wear as fast, and they don’t tarnish. One thing to consider before choosing white gold is that a small percentage of the population is allergic to nickel an alloy metal used in the creation of white gold in the US.

What an informative post! I love Joshua’s bride’s reaction – women know best, thankfully you were there to help him! Thanks for the helpful picture of the tarnishing. How does one get rid of that nasty tarnishing and make a silver ring last longer?

Hello Jennifer,
As a jeweler when I want to handle silver’s tarnish I just steam it, and polish it on a high RPM rouge wheel and it comes out shiny and perfectly new. But if that is not a possibility a silver polishing cloth can help or a creamy silver polish like Wright’s. It’s often sold at Hardware stores.
I loved Joshua’s bride’s response as well. It cracked me up.
Your Personal Jeweler,
Calla

Hello Calla, I just wanted to say two things: 1- Sterling Silver wedding bands have been quite the norm in a number of jewish communities in the world. Its getting worn shows the work that has been put into the marriage. I think that this way, Sterling Silver shows wonderfully how love grows and evolves along life. 2- I own an heirloom ring (sterling silver) which was cast in 1886, and only once repolished in the 1970s. It is in mint condition, although it has been my grandmother and great-grandmother’s engagement ring. It’s a victorian-era ring, with a london blue… Read more »

Dear Julia,
I’m so pleased you took the time to write about your family rings and your experience with silver. Your stories are wonderful. I’m pleased that Sterling silver has had such a nice impact in your family. Your words will add to the conversation about metals to choose. Sterling silver will be happy to be represented by your stories about it being a perfectly lovely metal.
Thanks for your two cents.
Your Personal Jeweler,
Calla

Will my fiance bought a diamond ring supposed be plantimun when we went to appraiser he put check out the diamond are real but ring it self is not so diamond set top of tarnish setting. Burn it something he did to it to see if it real. It turn black he said the money you pay for it not worth it. Do some suggestions should I returned spent lots of money on it.

Dear Annette,
I would return the ring to the seller and get your money back. At that point I’d ask friends for recommendations of reputable jewelers in your area. Once you have established that you are working with a jeweler that is trustworthy make your purchase dependent on a favorable appraisal.
May your new ring be a joy to you both.
Your Personal Jeweler,
Calla

I appreciate your advice in the post but I’m sick of the careless exclusion and invisibility of same sex marriage when describing unions (i.e. husband and wife) so decided not to read on.

Hello there. I’m sorry that you felt that way. I have helped and designed for many Lesbian and Gay couples. I have blogged about designing wedding rings for same sex couples. This is one of my posts:
https://www.callagold.com/wedding-rings-and-bands/lgbt-wedding-bands-what-about-the-guys/
For the record I donate to organizations forwarding advocacy for the LGBTQ community and include the LGBTQ community in my upcoming book.
Be well.
Your Personal Jeweler,
Calla

The right choice to go with is Platinum, at least that’s my opinion. Platinum has emerged as the most expensive and better-looking metal than others. Choosing a platinum diamond ring is a good choice due to its several benefits. Platinum has a more natural shine, making it a perfect pair with different diamond cuts and colors. Rings made from platinum are safe to wear and free from any kind of maintenance, as it doesn’t require any protecting coating.

Hi Reuben, I have to beg to differ on you statement that platinum has a more natural shine. It does have a nice shine, but not any measurable way nicer than white gold’s shine or silver’s shine. I’m afraid I need to differ as well on the, “free from any kind of maintenance” claim. As a repairing jeweler I fix prongs, breakage and other maintenance issues on platinum rings. Platinum is a malleable metal and is a fine and noble metal, but it, like fine car needs maintenance. I’m guessing by safe to wear you mean unlike titanum or something… Read more »