The Hardware That Tattoo Artist Use to Anchor the Diamonds

First tattooed wedding rings, now engagement ring piercing? Did you know about this? Are you thinking of doing it? When I first saw the image on the left, it was a radio station that showed it on Twitter. I assumed it was photo shopped and I’ll admit I was grossed out. Now years later it’s looking like this is a thing. What do you think about it?

If it’s in People, I Guess it’s Legit

Suddenly my feed was blowing up with pictures of engagement ring piercing pictures. People magazine had an article called, People Are Getting Diamond Dermal Piercings on Their Fingers in Place of Engagement Rings.  When I saw the picture of the anchors used to hold the diamond in place it became more real to me. 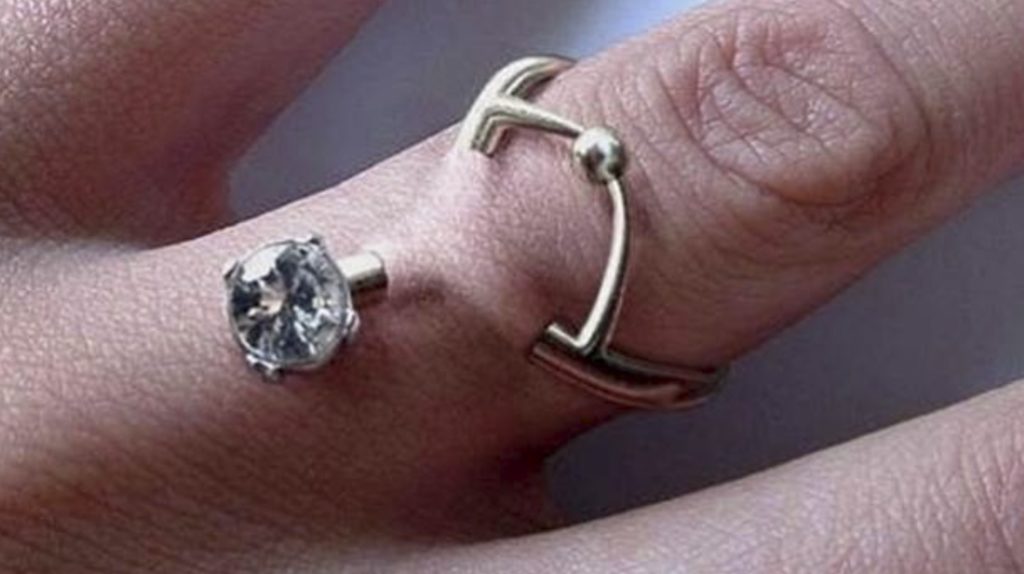 This Has to be Photoshopped Right?

Looking at this hurts in my mind. I picture doing dishes and pulling the gloves off that I wore so I wouldn’t get dirty water on my piercing. Then the plastic glove catches. Ouch.

According to Tattoo Artists It’s Safe

“Micro dermal anchors are safe and the body will hold them for years, as long as they’re in ideal places and if implant-grade titanium is used,” said professional body piercer Billy DeBerry of Fallen Sparrow Tattoo in Kissimmee, Florida.
That’s nice and all of him to say so, but seriously, on your hand?

According to Doctors It Isn’t Safe

In the Sydney Morning Herald, Dr. Chris Kearney was quoted as saying, “The fingers are obviously critically important to human beings and they shouldn’t be risked for the sake of a few likes on Instagram. Because of the constant use of hands (think toilet visits), piercings at this site are especially prone to trauma and infections.”

I don’t know about you, but I’m that girl that looks in the mirror and sees this big bruise and I ask myself, how can I not know where that came from? (Of course I do rock climb…hmmm)

Or I check the prongs on my ring and see a giant gouge in it or a prong bent way out of alignment. This tells me that we bang ourselves around without knowing it. Banging a pierced diamond like I banged that prong would be wicked painful.

As Cute as it Seems, Just No

The good doctor wasn’t done and he’s a pretty funny guy, so I’m going to let him do my talking, “Then there is scarring so that when you get dumped there is a tell-tale ‘engagement scar’ on your ring finger. It would be smarter and safer to tattoo your ex-fiancé’s name on your ring finger – or across your forehead.”

Actually I’m more of an optimist than that. You’re not going to get dumped. But I am after all a jewelry designer. How about a nice gold or platinum engagement ring?

Wrong. Just wrong and gross. I could just see that getting caught and ripping the flesh on her hand. I did know a woman once who eschewed the trad ring for a diamond nose piercing. For some reason didn’t look quite as obnoxious.

Hi Marta,
I shared this on my Facebook business page and got a whole lot of eeewww type remarks. I’d say the consensus is just no way as you say.
Thanks for commenting here, there was a ton on Facebook and I was happy to have a bit of convo here on the blog.
Your Personal Jeweler,
Calla