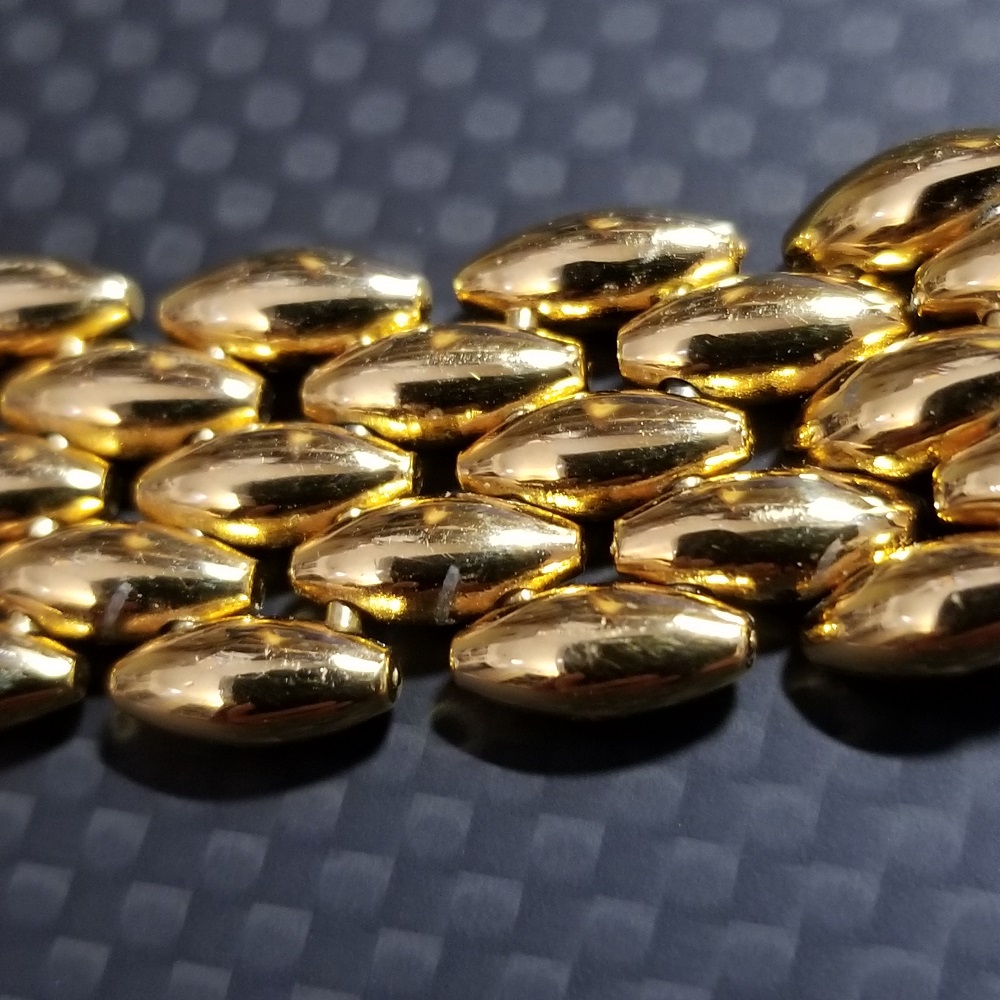 What’s the Difference Between Electroplating and PVD Coating?

Walter came to me a year ago to gold-plate a silver chain he had. After a year of daily wear, the plating was coming off in places. When we had our first meeting he also showed me his watch. He was pretty ticked off. He said, “I’ve worn my watch everyday for seven years and there are only these worn spots on the bottom.” There was a lot of wear on the bottom, but the top still looked shiny and golden. “I had my silver chain gold plated a year ago, and I’ve worn it daily and it’s wearing off of the clasp and doesn’t look as shiny as before. Why is that?”

In this post I explain why gold plating wears off and gold 'plated' watches keep their 'gold' look much longer. Why is this? The plating process on your watch band and on your jewelry aren’t the same technique, nor are they the same material. Let’s look at the differences. Pictured above is a PVD coated watch band. 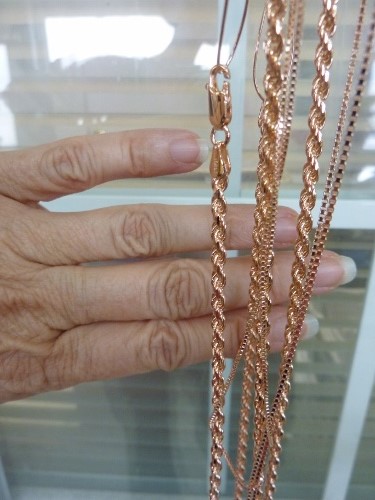 Electroplating is done by jewelers and is a fairly common service. The jewelry is immersed in a electrolyte solution (liquid bath) and electrical current is applied to  move microscopic metal to deposit on the piece of jewelry. The steps are covered in my blog - How Gold Plating Jewelry is Done - with pictures.

PVD coating or Physical Vapor Deposition is done in an oxygen free vacuum environment. Like the picture above.

It is mostly used on drill tips and door hardware and other more industrial types of applications. It wasn't originally intended for jewelry. It was developed to create lighter weight and strong finishes on parts going into space. I first noticed it back in the early nineties on citizen watchbands.

PVD coating can be done in different colors. This ability makes it attractive to watch band/fashion companies (think Michael Kors and all of those "pink" watch bands). From what I understand it works best on stainless steel or a base metal that has been nickel plated first. 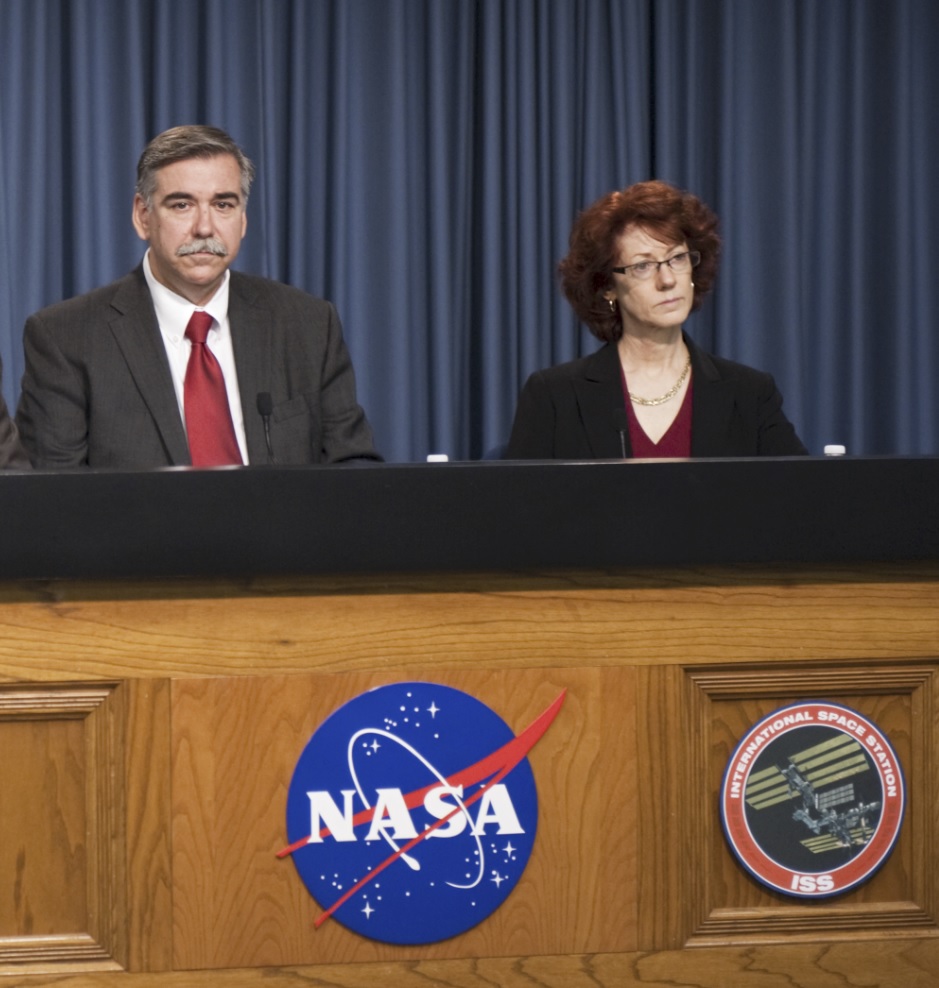 PVD coating techniques were developed into usable application processes in 2010 when NASA scientists at the NASA Glenn Research Center in Cleveland Ohio created a viable alternative for among other things chrome plating. Previously, chrome plating could chip off when banged into things. PVD coating is metal bonding at the molecular level. This means you can bang it around and it doesn't chip off easily. PVD coating creates lighter weight items than chrome plating and it is more environmentally friendly.

Check out this history of PVD coating going back to Galileo.

What Are Some Steps to the PVD Coating Process?

In the PVD coating process, the parts, like door knobs or pieces of costume jewelry, are put in a chamber on racks. There is a piece of special material, perhaps a metal, that you want to cover the parts with. You suck all of the air/oxygen out of the chamber. Then you give that special material an electronic charge and high heat to vaporize it and the vapor bonds molecular-ly onto the pieces on the racks.

I am not sure if the pieces on the racks are electrically charged or not. Probably so. Probably a positive/negative process. It is an expensive process, so if you are doing thousands (or hundreds of thousands) of pieces then yes do it. Otherwise go with electro-plating. 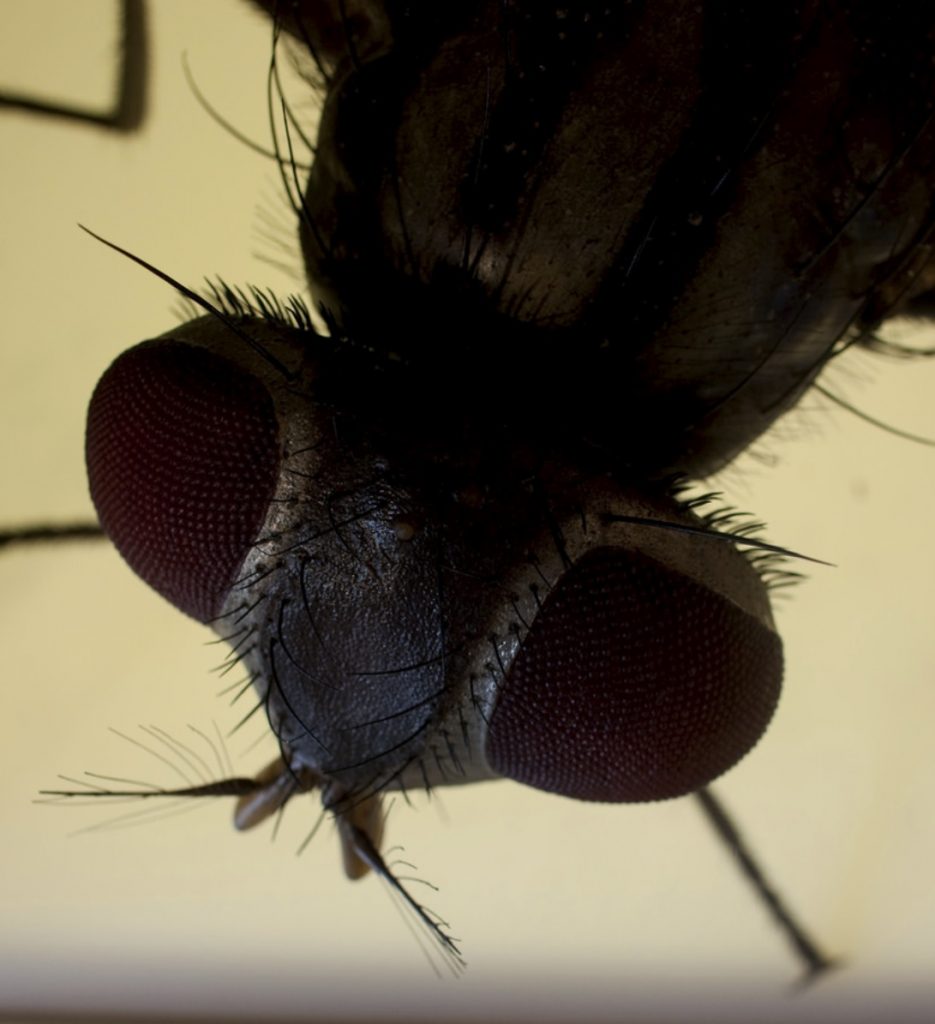 I think the reason why PVD coating is so durable is because it is taking the material down to its atomic structure and rebuilding it as it applies itself to the parts. Kind of like the movie The Fly with Jeff Goldblum. The use of titanium nitride in the process gives great durability and corrosion resistance.

What is PVD Coating Used on?

I have seen the PVD method used on everything from class rings to stainless chains and pendants. I've seen it in black, yellow, pink, clear and silver. It is much more durable than gold electro-plating. When it wears off, it is usually only in an area on the item that gets a lot of abrasion or constant rubbing on hard surfaces. I have heard of places that you can send your one or two items to and have them PVD coated, but every time I try to follow up on the tip, it leads to a dead end. So I do not offer this service.

From Tom Himstreet of Bend Plating Inc, "Gold PVD from Bend Plating is actually ZirconiumCarboNitride (ZrCN). Zirconium metal is vaporized and combined with Carbon and Nitrogen to produce the gold color.

Shades of PVD gold color can be produced by varying the amounts of Carbon and Nitrogen. Regarding functional characteristics, PVD is going to be more scratch resistant and Gold plating will be more electrically conductive."

Can I Electro-Plate Over PVD?

Nope. Trying to plate on something that has a PVD coating is a big pain as well. Plating won't stick to it, so you have to remove it first.

From what I’ve heard the chemicals needed to remove PVD coating are a combination of the nastiest acids you can think of. It is called "Tiger Juice" by some people in the industry. Probably because if a tiger sniffs it they will die.

Geeking out on More Info

For more info, look up Vacuum Deposition or ION plating on Wikipedia. There are variations like IVD, CVD, IAD, etc. They are all something you want to do if you have a multimillion-dollar manufacturing plant. Otherwise, run away as fast as you can and don't look back. It is not something for the home jeweler or the around the corner jeweler to even consider.

The basic point that answers a lot of questions is this. Gold PVD coating is not made of gold. Gold elecro-plating is real gold 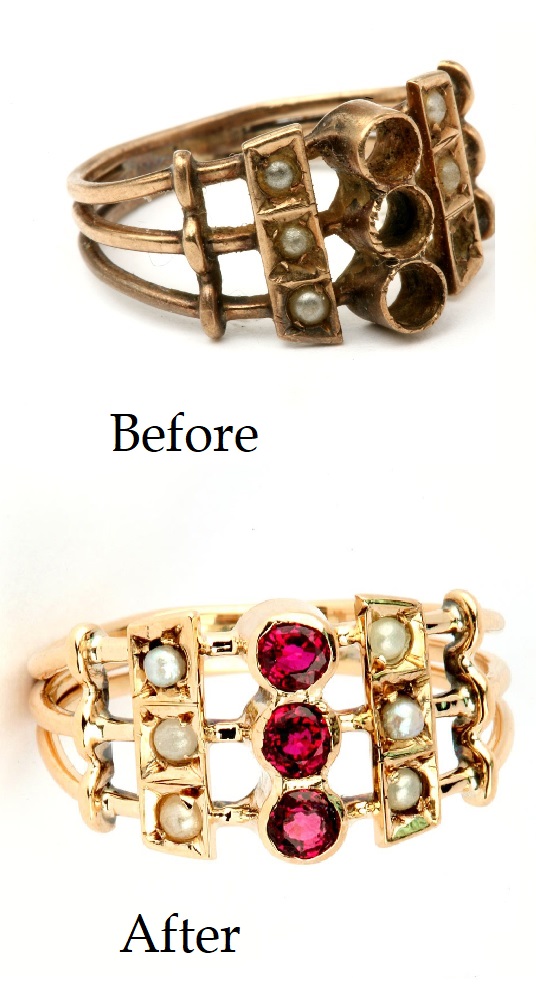 Before and After Gold Electro-Plating

The behavior of electro-plated gold vs PVD coated 'gold' is noticeably different. Gold plating wears off slowly, thinning in areas that contact objects regularly. When plating wears off it can look faded or if it is plating over sterling silver the tarnish beneath can darken in spots where the gold plating has worn thinner. 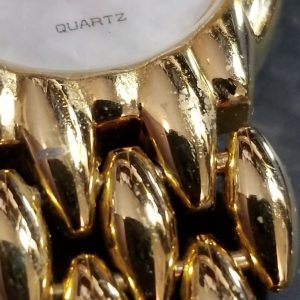 PVD Coating Wears in Nicks and Chips Away

PVD coating does not tend to wear slowly. It tends to come off in little hunks or nicks. When PVD coating comes off it generally shows a different color underneath where the finish chipped off. This is because PVD coating is done on base metals that do not display or hold desirable metal colors. PVD coating is hardier than gold plating and more long lasting.

Once I explained the two processes he thanked me for explaining the difference. He then had me gold plate his chain.

I don't know about you, but I'm suddenly in the mood to see The Fly again.

View all posts by Calla Gold →

Hi Calla,
Thank you for this wonderfully knowledgeable post! Question: What about “real rose
gold PVD plating”? There’s a ring with this description and I’m wondering if the plating will hold up as well as described here. I’ve seen your rose gold post and reconsidered this a little. Thank you so much!

Hello Amy, I suspect that if the rose gold color is actual rose gold, then it’s heavy copper burden would shorten its effectiveness. However some PVD coating is colored metal and that would not necessarily have copper in a great amount and could work better. We should also consider that since PVD is a more molecular joining of metals than electroplating that perhaps that would make it more lasting. I fear you’ll have to test it yourself and let us know in the future. I take it from your comment that they claim this item is PVD coated? I would… Read more »

So I am not quite sure, do you offer PVD or just the electroplating process? Also is there some coating that I could buy online or over the counter to protect and lengthen the life of the Rose gold coating I still have? I realize it would not be permanent. Something along the lines of a clear coat sort of product? Thankyou.

Hello Meghan,
I do not offer PVD coating. I offer electroplating. Some people put clear nail polish on plated items as a jewelry hack. I have never done this, nor do I know how effective it is. Or if it goes jinky down the line.
Your Personal Jeweler,
Calla

Wow, what an informative blog/article. I really enjoyed it. Thanks for sharing that.
I was interested to know about this pvd process since I am considering buying gold jewelry plated with this method.
Thanks again!

Hello Ricardo,
I’d say that gold plated jewelry plated with the PVD method will last longer than the gold electroplating of method. However where gold electroplating is done with gold, PVD can use gold looking metals, as opposed to karat gold. Something to check out when investigating your purchase. Ask what is the composition of the gold that is plated. Is it gold or a mix of gold looking metals or questions on that line.
Your Personal Jeweler,
Calla