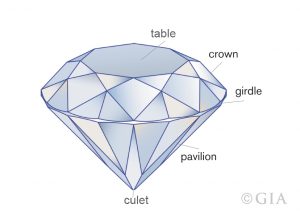 Parts of a Diamond. Courtesy of GIA

Shape vs Cut of Diamonds, It’s Not Enough to Know the Shape You Want. Shape and cut are often confused but know this: they aren’t the same thing.

If you confuse the two, you may ended up making an unfortunate purchase like Nate did. (See below story)

I’m going to explain what the difference is in this article between diamond shape and diamond cut. Let’s start with shape.

Shape refers to the basic external outline of a gemstone. Round, oval, square, triangular, heart, marquise, and pear are all shapes. And they all describe shapes of diamonds you might be looking for.

Soccer balls and basketballs are the same shape and can even be the same color. But are they the same? Not by a long shot. Any kid can tell the difference between the two.

It may take a trained professional to recognize the differences between two round diamonds, but you’ll always be able to identify its shape. Round is round!

Identically shaped stones can be cut, (faceted), differently. A round stone can be cut with any number of facets and dimensions—and still be round!

In the jewelry world “cut” with diamonds does not refer to shape (round, oval, etc.), but the symmetry and proportioning of a faceted stone. A diamond’s cut greatly effects its brilliance. The more skillfully it’s been cut, the more sparkle and pizzazz it will show.

Two round tires of the same size can have completely different tread patterns. Their shapes are the same. Their cuts are not. Similarly, two cars of the same year and model will have the same shape yet may be trimmed differently. One may be a convertible, the other a hard top. One has tinted windows, the other doesn’t. One is painted a metallic red, the other basic white.

Soccer balls and a basketballs are both round. But are they the same? No! You get the idea. Just because two diamonds are both round, doesn’t mean their cuts are the same. One might be what’s called a “round brilliant.” The other might be an “old European cut.” The former has more facets than the later and will typically be more bright and shiny. But they’re both round shaped!

Where Diamond Naming Can Get Confusing

The Facet Pattern of a Radiant Cut Diamond is Noticeably different Than the Emerald cut.

One of the confusions you’ll run into is that some diamond shape names have had the suffix “cut” appended to them. For example an “emerald cut” diamond refers to the stone’s square or rectangular shape and the way it’s normally cut.

An emerald cut is unique in that the corners are notched making it easier to set and making its corners stronger.

Sometimes both the shape and the cut are used in the diamond shape name to identify a single stone. A “round brilliant” diamond has a round shape and a brilliant cut.

What Does the Love of Your Life Really Like in Square Diamonds?

The reason it is so important to know the difference between shape and cut is that it is easy to think you’ve heard what she loves in diamond shape and cut when you have not.

Your fiance may not realize that there is a special name to the shape and cut she loves.

What she’d really wanted was a cushion cut diamond, but she’d called it square. He called me to help with damage control. I met with him and his fiance. I went over all the different choices of “square” shaped diamonds. Kiki let me know that what she really had in mind was “that one.”

And she pointed to a cushion cut diamond.

I let him know that it fits in the “square” spectrum when choosing diamonds.

The moral of the story is that it is especially critical when your fiancé is interested in a “square diamond” to get a bit more specific on which cut she likes.

Does she want a princess cut with its angular, sharp edged corners? See the picture at the top of the article.

Does she want a cushion cut which is like a princess cut, but with rounded corners and rounded edges for a more feminine look?

Both the princess cut and cushion cut have around 58 facets for lots of brilliance in look. But they differ in shape slightly. That difference between hard angles and softer curves is subtle, but very important.

Does she want a square emerald cut diamond? Its faceting pattern shows the beauty and depth of the diamond. The emerald cut is not as sparkly a cut style as the princess cut or cushion cut.

If she likes the notched corners like she’s seen on emerald cut diamonds you’ll want to know if she wants more sparkle or more elegant subtlety. Also see Asscher diamonds below.

The emerald cut uses a step cut facet pattern which is especially good for pairing with a vintage style ring design or a simple and classic style.

Does she want an Asscher cut for a more classic vintage look? The Asscher is a bit more out of the ordinary. If your fiance is looking for the square shape, but seeks a more seldom trod path then the Asscher is a wonderful choice.

It is cut more deeply than an emerald cut pattern and sparkles more. The Asscher uses a step cut style for a more old school vintage look. Its cut combines sparkle and a mirrors of infinity look, when you gaze down deeply into it.

Now You Officially Know Your Shape vs Cut in Square Diamonds

“What?!? She just changed her mind to an oval shape? Well dude that’s the subject for another blog post.”

May Your Diamond Selection Bring You a Lifetime of Happiness.

Check out my other diamond selection blogs starting with “Shopping for Diamond Clarity, How Perfect Does it Have to be?”

Diamond shapes and cuts … who knew there were so many differences? Calla Gold, that’s who. And, I never realized that I really like that cushion cut diamond. Never really thought about it. I’m getting such an education.

Hi Amy,
Until I really looked into the shapes I was mentally lumping them together. That was years ago. I get such a charge now out of pointing out the differences to my clients.
I’m thrilled you have discovered cushion cuts. I love them!!
Thanks for your feedback!
Your Personal Jeweler,
Calla

Calla,
I really like the princess cut and the cushion cut. I don’t sell diamonds yet and I can’t afford to buy many. I also like channel sets and cross overs. I’m an odd ball and I always want something different.
You blog is great and very informative. It’s obvious that you put a lot of time into your blogs–there are so many of them.

Hello Leecy,
Thank you for sharing your favorite cuts and setting styles. If that’s oddball then keep it up! And I’ll keep writing blogs!
Merry Christmas to you as well.
Calla Gold

This is really a helpful dive down into pretty diamond details here. There really are a lot of distinctive diamond shapes that can be called square if you don’t know the difference.
Thanks for the helpful pictures too.

Dear Tracey,
I appreciate your writing back. This was a fun post to write and I’ve already sent it to a couple guys who contacted me about square diamonds. They are off to do their detective work.
I think diamonds are so gorgeous and great pictures, thank you internet, make a bid difference in differentiating cuts and shapes from each other.
Diamond Jeweler,
Calla Gold

What an fantastic amount of information in this article, Calla! I had no idea that the cut would make such an amazing difference. Your blog is truly educational.

Hi Linda,
Thank you so much!!! I really enjoyed this one because there are so many pretty “square” diamonds out there.
Your Personal Jeweler,
Calla

Calla, this article on square cut type diamonds should be used to inform the next generation of jewelers! I especially liked Nate and Kiki’s “square diamond” story. This article of yours promotes good communication. I approve. Very informative!

Hi Patricia,
I’m pleased to know how you enjoyed all the choices of square diamonds. I too find it fascinating what can happen when one person is seeing one diamond and the other one is seeing something similar, but different.
Once using my detective brain with a guy who wasn’t all that clear on what his fiance liked, we found her on Pinterest and found a board called “engagement” and got our questions answered. I loved how he thought I was brilliant. I think she was brilliant!
Your Personal Jeweler,
Calla

Do you know if a plain old 1/8″ wide ring band can be reworked into a “football” shape? and can a CZ in the same shape be mounted in the center with that newish style where it seems to be shimmering? I assume it would need to have a bale/chain added. The ring is about a size 7 or 8. Do you have a recommendation on carat size to look attractive?

Hello Marge, Thanks for your question. I have in the past changed the outline of a wide band ring with a grinding technique. It is time consuming but doable. So that is possible. I’m not sure which style you are speaking of that looks shimmering to you. Perhaps you could email me a picture or two at my calla@callagold.com email. It looks like you want to convert the ring into a pendant. I have also done this quite a number of times. I do add a bail for the chain to go through so it hangs nicely. Without being able… Read more »