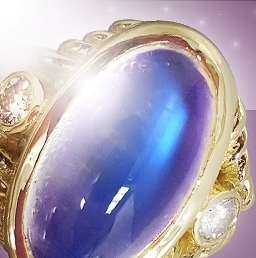 Struck by the blue flash of love. I’d had my eye out for a nice moonstone for some time when I spotted a big, beautiful one that I knew Charla would love. Many moonstones have a blue flash of some sort. But only a few are clean inside without inclusions and give a deep flashy blue when turned back and forth.

A number of years ago, we’d talked about how she’d wanted to create a ring with one of these gemstones to go with two very special diamonds from her husband.

She was especially entranced with rainbow moonstones which displayed a blue flash. I couldn’t wait to show her what I’d found. 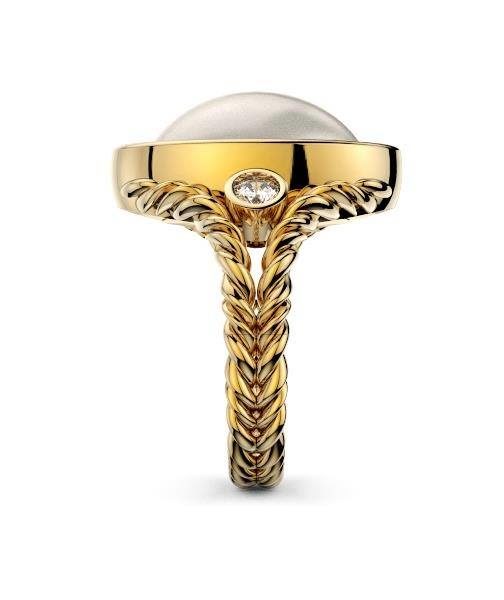 The CAD Image of Charla’s Ring

Charla loved the large, oval moonstone right off the bat, but said the timing just wasn’t right—which I could respect. Sometimes jewelry takes second place to the more important things in life. Charla’s husband, Barry, didn’t think so.
“Wow,” he said. “That’s a beautiful stone. What is it?”
“A rainbow moonstone, one I’ve been searching for for quite some time for Charla.”
“Do you like it Charla?”
“I love it.”
“Happy anniversary, honey.”
Charla was speechless. So was I.
After hugs and kisses, we got down to the serious business of designing her new ring.

That dreamy look of moonstone that bends light and looks different in varied lighting adds to its magical feel. It is usually cut in a cabochon or un-faceted dome to let you see into its interesting translucent world.

I recently saw a faceted moonstone with little fire or light play and had to ask myself, “why would you facet a moonstone?”

Design Steps For Your Individual Uniqueness – What Charla and I Considered

Charla and I used many of the design decision steps I encourage my readers to consider:

She wanted a very simple design that she could wear in the day while dressed in a nice tee and jeans. We picked yellow gold because of the warm undertones in her skin. Because arthritis was adding size to her fingers, we wanted a nice wide design which makes your hands look nicer when there are knuckle issues going on.

We chose an open design giving a reveal of the finger beneath it as that reveal lightens up the look and feel of a design, when you go for a larger or wider design. We incorporated a nice concave aspect to the taper-down to add a delicacy of line to her ring.

A Gift of Love Reminds You Always of the Giver

It turned out to be such a loving and wonderful gift. Charla loves it so much. And Barry is such a hero. Every time Charla wears her gorgeous moonstone ring she thinks of him.

I’d say the Greeks were right. After all Barry imagined a happy future with Charla wearing her moonstone ring and decided that he wanted her to have it. What a wise man is he.

That moonstone ring is just as beautiful as the story behind it! Thank you for sharing the powers and symbolism back through history attached to moonstone. Her moonstone is just so bluely beautiful.
How do you come across gems like this?

Hello Patricia, Charla would love your comment! As far as finding gemstones of awesomeness. Sometimes I find amazing gemstones at the Tucson Gem Show which has been a source of some awesome gemstones I have designed with in the past. This moonstone came from one of my travelling all over the world gem suppliers. I’ve known him for years and he loves it when I tell him what I’m wishing to find. I work with a number of gemologists that travel to various parts of the world in search of wonderous gems. I am lucky enough to know them. Your… Read more »

It was such a pleasure to learn all about the moonstone, one of my favorite stones! Thank you for that backstory! I love the reveal, it highlights the design of the ring and the stone s beautifully! Another amazing design by you Calla!

Hello Jennifer,
Thank you so much for sharing your love of moonstones. May you enjoy moonstones in your life too.
Your Personal Jeweler,
Calla

Stunning stone and ring, with lots of flash!