One of Larry’s Purple Heart Medals

If you’re a guy and you won the Superbowl you get a ring. And it means a lot and you wear it.

If you’ve been in the military and get a meaningful medal, doesn’t it make sense to wear that honor as a ring? This is a story of the creation of a Purple Heart ring for Larry.

I loved the many steps lavished on this important project. I share my thoughts and steps on Larry’s ring with you now.

Being in the Military is Different

Having had a career military uncle, I respect the work, the comeraderie and risk that choosing the military entails.

My client Larry has a lot of military medals. A strong confident man, he first reached out to me to replicate his lost Purple Heart ring.

He didn’t feel that the options offered online were what he wanted. When I heard amethyst, meaningful diamonds and a George Washington profile that looked good, I was hooked on the challenge and the honor of  doing this project.

Beginning Without a Bid

Creating a special piece  of jewelry with many details and techniques worked into it often entails teamwork. In this case a lot of teamwork. Figuring out what each part will cost what is quite challenging, especially when you don’t know exactly what the proportions will end up being after all the changes to the basic shape you have  in mind. 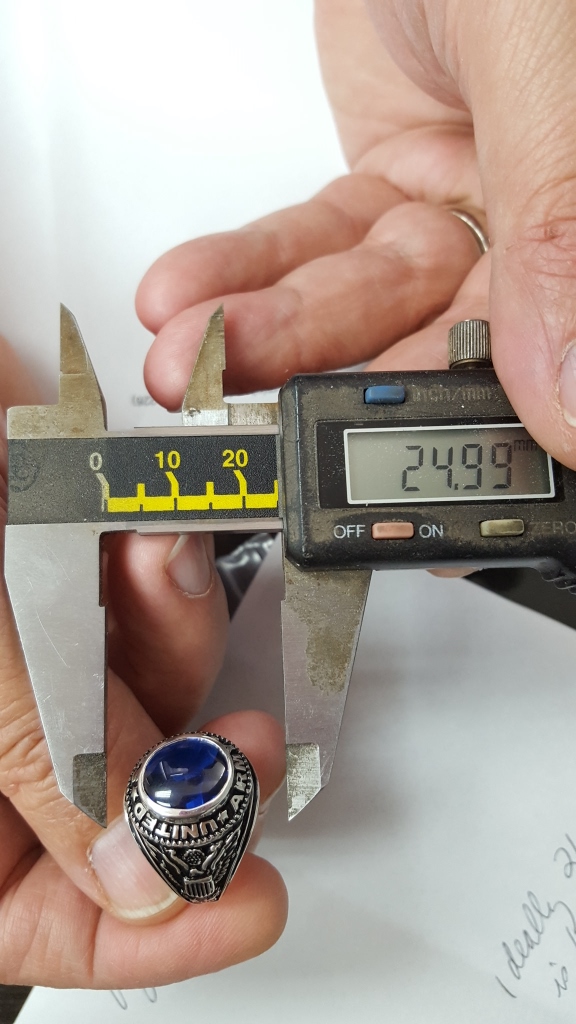 Sample Ring for Shape, VS Width of Larry’s Ring

In order to get the basic shape and style I’d be  working with, Larry showed me a ring online. It was made of siver and the detail  work was a bit indistinct, but the shape of it was a good starting point. So we ordered it.

Larry had a special ring he wasn’t 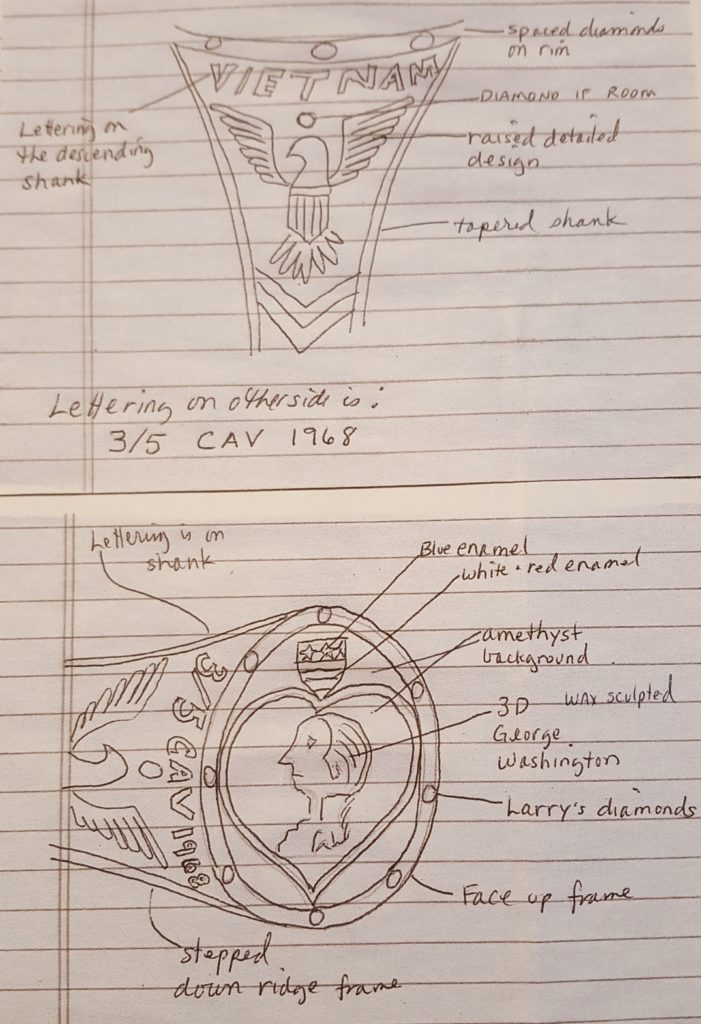 wearing and he wanted to use the diamonds that were  in it in his purple heart ring, in the frame around the central medal section.

Every other individual part came about as I drew and redrew the ideas, dates,  symbols and details for his ring until all of the specifics were written or drawn in and it looked good.

Once it was drawn and described I could finally figure out the bid as I now knew who I wanted to work with for the various details. And more importantly could figure out the dimensions of each part.

Larry’s Therapy Dog, Bringing Joy to Many on a Regular Basis

I’d noticed heroes rarely talk about the things they’ve done. They’re more likely to tell you about getting in trouble for accidentally letting some stray dog in among the trash cans when going into that locked area for a secret smoke.

So, you’re laughing imagining that messy problem, and yet it would be a huge problem. But they won’t tell you the fact that they protected and then rescued two guy who stood no chance without them. Guys who now have kids thanks to them. But that’s military guys.

I’ll probably never know why Larry got his medals, but I smile knowing he’s a good man.

Steps  in the Making of  Larry’s Purple Heart Ring

My first challenge was the profile we needed of George Washington. There are a ton of pictures of him face forward, but few detailed ones of his profile.

I knew that this level of detail was artists work and not a CAD programmer’s job. So I chose a wax sculptor for the wax. 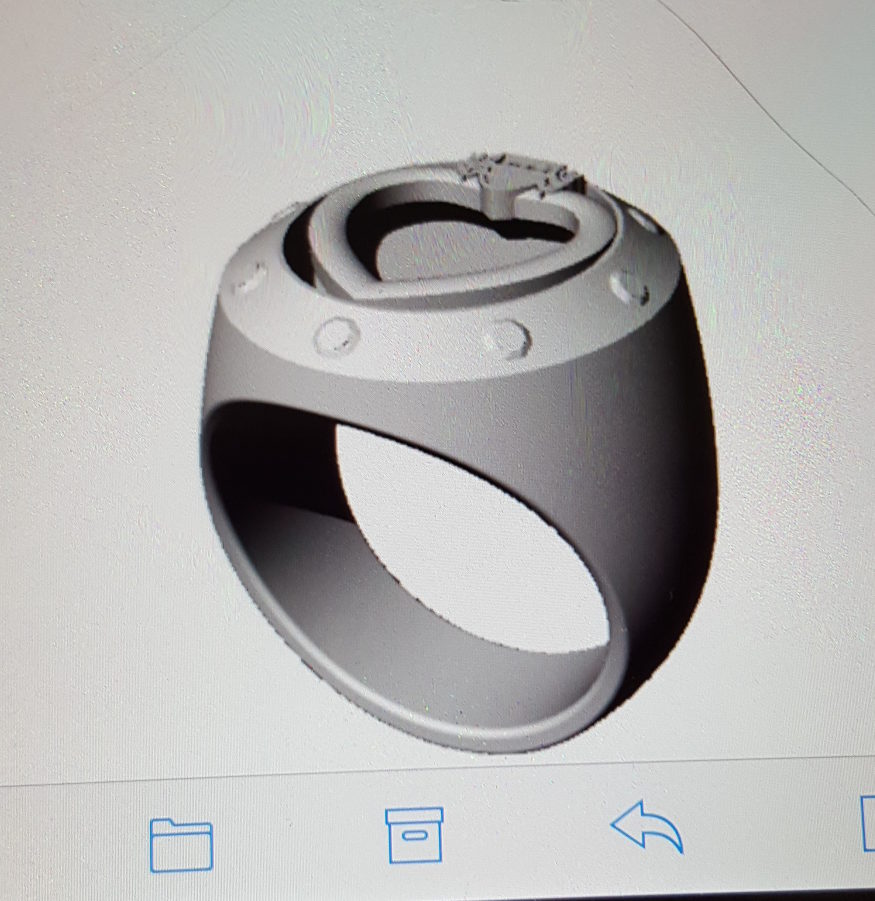 The lettering we needed to be precise and crisp, as did the eagles, leaf, and chevron details. I chose to have this part of the design created on a CAD program. The CAD program has precise measurements as part of the program which I needed in order to have the custom piece of amethyst cut to go under the heart.

I worked as well with my enamel artist to figure out what colors we’d use where. 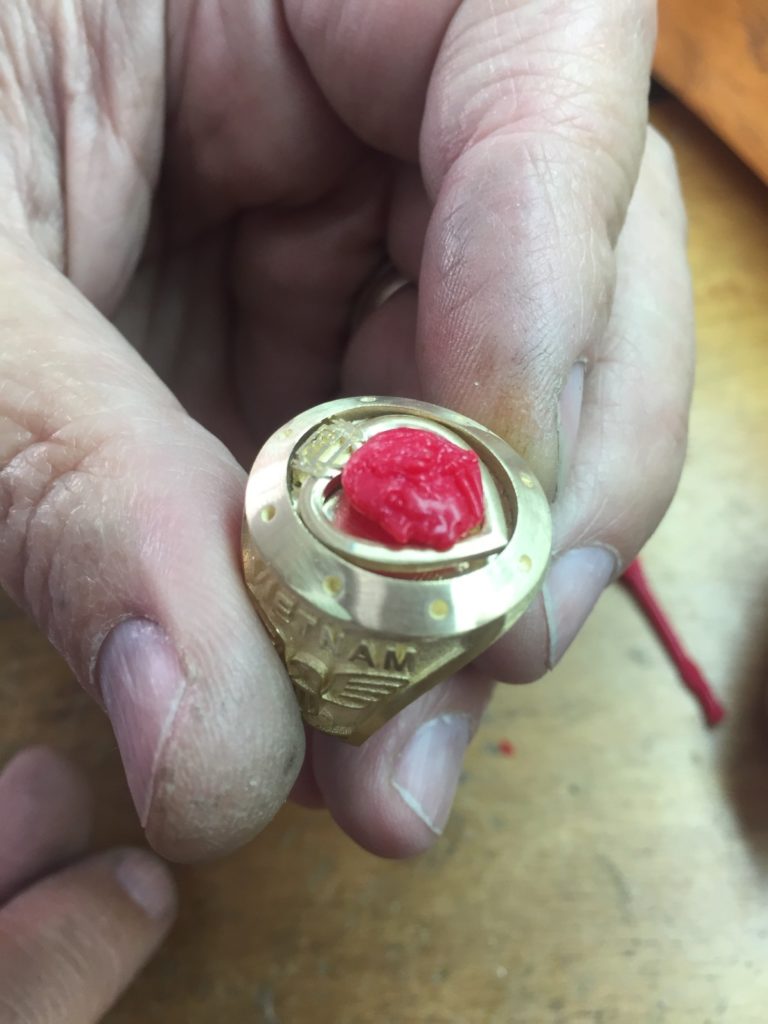 Step-by-step the pieces came together. 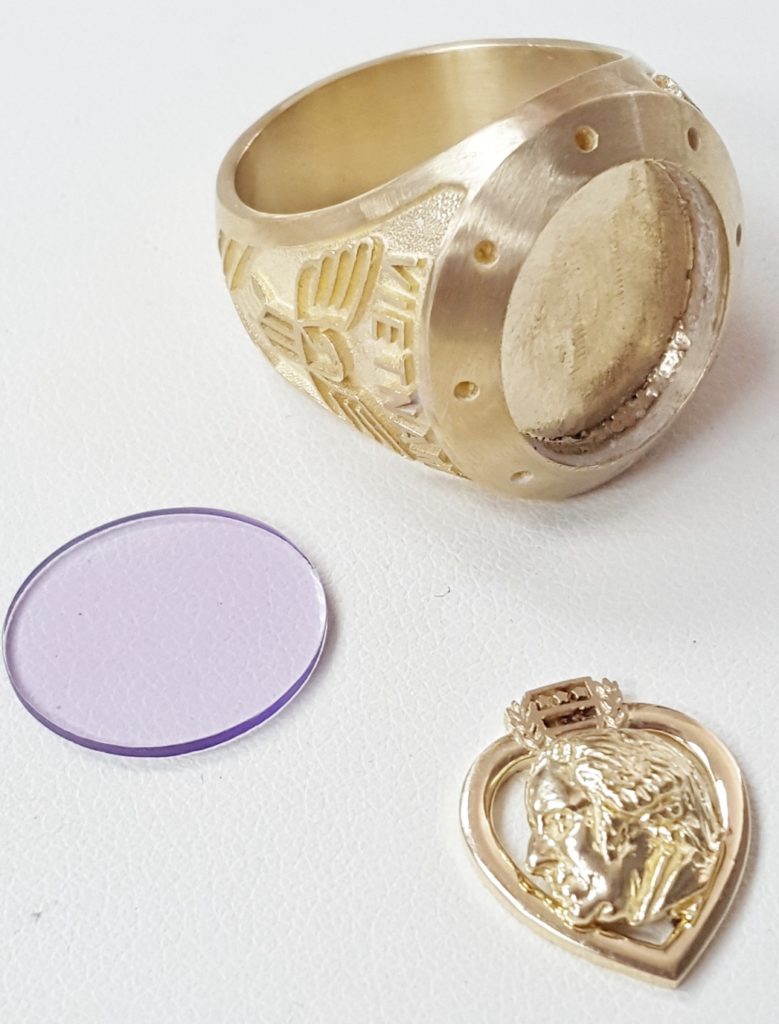 First, the CAD, then the wax sculpted George, then the custom cut piece of amethyst. Somewhere in there the wax was created and then casted.

Once the casting was done the diamonds were set, enameling brought sparkly colors, the amethyst and George Washington were put in place.

The final step was applying oxidation finish to make the lettering pop. This was done ten times so it would last well into the future of the Purple Heart Ring.

How Long Did it All Take? 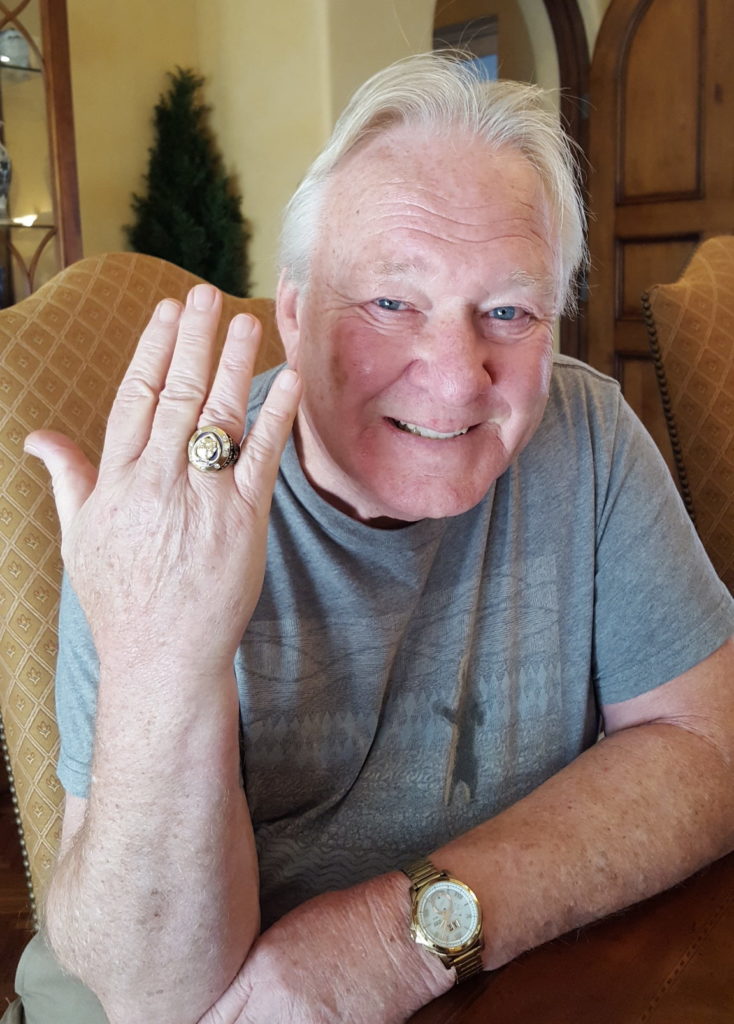 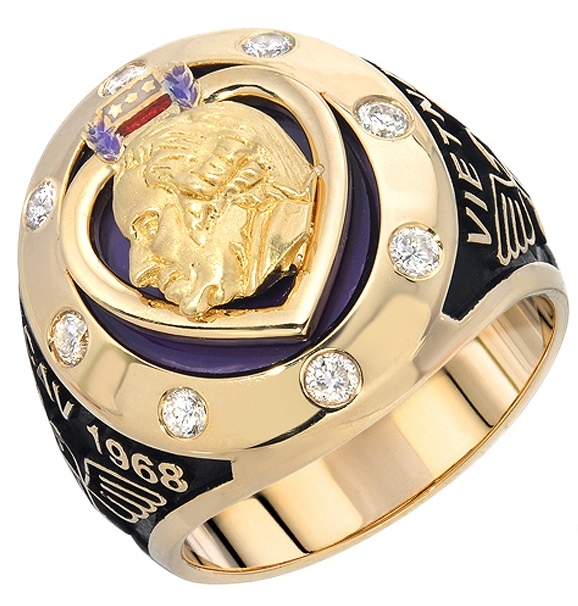 as I wanted to stop at each step to double check that all was well.

A medal often spends its time in a box or in a frame. Being part of making this meaningful recognition as a ring is a  special  moment in my life as a  jeweler.

Larry cares a lot about his ring; it stands for a part of his life he’ll never forget. Bringing his Purple Heart ring to Larry was exciting and moving. 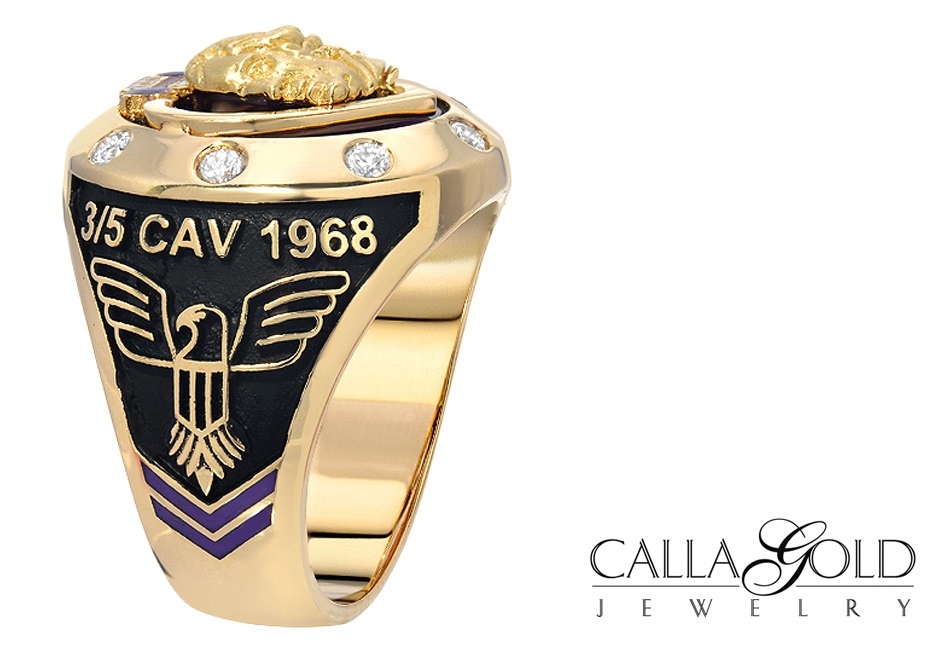 This is truly beautiful work. Thank you for sharing!

Dear Nancy,
Thank you for visiting the blog and giving your input. It’s always extra special to hear from another jeweler.
Your Jeweler Friend,
Calla

Incredible design and wonderful craftsmanship!! I absolutely love this. Thank you for sharing Calla.

Dear Lena,
I’m so happy you came by and weighed in on this incredible ring. I share the credit with my amazing team mates. It took a village to make Larry’s Purple Heart ring. Being able to share it is a joy.
Your Personal Jeweler,
Calla

I love the story and the beautiful ring you have designed. Truely incredible!

Dear Sinork,
Thank you very much for your kind words. I love Larry’s story and his ring.
Your Personal Jeweler,
Calla

Great story, Calla, and as always I am fascinated by your craft! The fact that you combined the custom cut flat amethyst, enameling, wax sculpting and that nice dark oxidation strikes me as so much work. It is such a special ring.

Thank you Linda,
I enjoyed this process of making the Purple Heart ring so much. It echoes in my heart and I think of it often.
Your Personal Jeweler,
Calla

Wow Calla, This beautiful ring shows what Jewelry can be. Not just another bauble to show off, but a piece that moves us all to feel the love and sacrifices this wonderful gentleman has given our Country. Thank you for sharing!

Dear Margaret,
I so love what you have written here. I’ll make sure Larry sees that you honor his service. He is indeed a wonderful gentleman.
Your Personal Jeweler,
Calla

I love all the pictures of the many and various steps. The idea behind this Purple Heart ring is wonderful. It’s amazing seeing it go from idea to reality!

Hello Judith,
I’m very pleased that you enjoyed seeing the many steps in the making of the Purple Heart Ring. I’m pretty pleased about it too.
Your Personal Jeweler,
Calla