Palladium in the Rough

What is Palladium? Palladium has been used in jewelry making since 1939. It is a precious white metal in the platinum metals group and, as such, shares many qualities with platinum. Before 2004, palladium was primarily used in white-gold alloys and was generally considered too expensive to be used as the primary metal in jewelry. Recently, however, the price has dropped, making it a more viable option for jewelry making.

How Does Palladium Compare to White Gold and Platinum?

Palladium looks a lot like platinum, but is almost half the weight and density. Because it is less dense and more plentiful than platinum, it is significantly cheaper.

How Do Ring Costs Compare?

Since platinum is so much heavier than palladium, the difference in price makes sense. Even though the cost of raw gold and platinum are similar, keep in mind that the amount of 14kt gold used is only 53% compared with 90% or more for palladium or platinum.

What About Casting Palladium?

I asked Don Briscoe, owner of casting company Artistry of Gold, what his experience has been with the casting of palladium.

“The biggest problem with palladium is its tendency to absorb gasses."

“If a metal absorbs gasses, that complicates the casting process. If it absorbs too much gas, then in the cooling process the gas tries to escape and you get porosity spots or discoloration. Palladium’s tendency to absorb gasses creates a real and continuing problem for jewelers working with it. If a jeweler sizes or works on palladium there will most likely be discoloration of the metal in the heat-worked area."

“If a jeweler decides to rhodium plate a palladium ring thinking it is white gold, it will darken the metal -- the opposite of the desired white result.”

In other words there are reasons to be careful if you buy a palladium ring. Only have it worked on by a jeweler who knows how to work palladium.

What If I Have Nickel Allergies?

Palladium—along with zinc and silver—are often used in the alloying of white gold. They are used to replace the more common nickel alloy, which is harder and cheaper. Palladium is used as an alloy to white gold these days since it’s hypoallergenic, and so many people seem to be allergic or sensitive to nickel.

Since palladium is considered hypoallergenic, it’s a good choice for people who are allergic or sensitive to nickel.

[Not sure if you have a nickel allergy? This great article from The Wall Street Journal can help!]

Pros of a Palladium Ring

To drill deeper into how to handle palladium sizing and repairs, check out Johnson Matthey’s 84 page palladium technical manual.

Technical Challenges of Working With Palladium Spelled Out

Palladium solidifies very quickly when being cast. The consequence of this trait is that a design that involves thicker and thinner elements next to each other may fail to cast completely. The same is true for casting with angles or corners in the design.

Since we’re talking about casting palladium, it is best to use a caster with equipment that uses only argon gas instead of oxygen, which creates a vacuum. 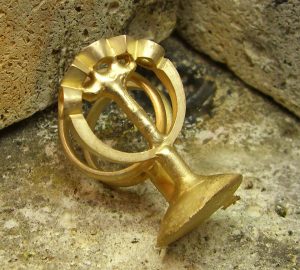 Sprue Leads Molten Metal into the Mold to be Cast

A caster casting palladium needs to use more sprues, (the lines of metal leading into a cast piece). A yellow gold ring might need one sprue and a similar palladium ring might need three or four. These sprues would be there to help release the gas absorbed during casting to help reduce the possibility of porosity -- the ugly little pinholes created as gas escapes the cooling metal. Also, with palladium’s habit of solidifying quickly, a single sprue method would run the risk of an incomplete casting.

What do I Think of Palladium? For Jewelry and as an Alloy

I’m not a fan. Personally, its lightness makes rings feel kinda fakey to me. I also tend to avoid it because I know how challenging it can be to work with.

Since a lot of the designs I create have details I fear a failed casting of the details.

As far as palladium as an ingredient in white gold for my allergic to nickel clients, I'm fine with that, but have to have more care taken in casting and repairs.

Should You Choose Palladium?

Picking palladium is a personal choice. I have made palladium designs that my clients loved, and I've sized a few palladium rings and managed to not leave obvious dark marks, but I was quaking in my boots.

If you ask me about palladium, I’ll suggest palladium white gold because it’s a lot easier for me to work with.

Calla, this is fascinating! I have never heard of this metal before. I know that you personally don’t like the “fakey” feeling of Palladium, but I’m curious to know if it is actually of a lower quality in metal? I feel like the weight would trip me up too, but am curious if the metal feeling holds validity in the actual quality.

Hi Jennifer,
Thanks for your comment and question. Palladium isn’t well known, but I think you’ll hear more about it in the years to come. It is a perfectly fine metal in the strength department. So it is a quality metal, just a challenging one to work with.
Your Personal Jeweler,
Calla

Great blog, Calla – very interesting and informative! It would be terrible to discover that you have a metal allergy *after* getting a wedding/engagement ring. Do you know of any way to test for metal allergies without, you know, actually getting a rash?

Dear Lynn,
Testing for metal allergies is something Dermatologists do. Some women don’t show allergies for years and then suddenly it shows up. As far as preemptively checking for a metal allergy I’d check with your Dermatologist. Your question is a good one.
Your Personal Jeweler,
Calla

Hi Calla, I now know a lot more about palladium, a jewelers metal I had never heard of before…thanks for all the interesting info!

Hi Dani,
I’m happy to have filled your head with palladium data. I find it an interesting metal.
Your Personal Jeweler,
Calla

Great blog, Calla! I wouldn’t have guessed that palladium rings could cost more than gold rings, but your explanation made a lot of sense. I like palladium’s silvery look, but I agree with you that traditional gold rings are the way to go.

Hi Patricia,
You’re singing my song as far as going for the gold goes! I’m glad the metal purity explanation made it across. You wouldn’t think it’s lighter and it costs more, but it does!
Your Personal Jeweler,
Calla

I’d never heard of palladium. I read this and then Googled it and see a lot of jewelers using it. Is there a situation where you’d be more enthused about using it?

Hi Bob,
I think with textural designs I’d be more likely to use it as it holds texture and form very nicely. Thanks for coming by.
Your Personal Jeweler,
Calla

Googled palladium and found your article. I do appreciate that it is nice and not technical, not too much anyway.
Good stuff.

Hello Tracey,
Thank you so much for finding my article on palladium.
Your Personal Jeweler,
Calla

This article has the info I was just looking for everywhere! Thank you for your time to provide us with all this information.

Hi Michelle,
You made my day!
Your Personal Jeweler,
Calla

This is a fascinating read.
Does Palladium discolour? If so what would cause it?

Hi Lisa,
Palladium can darken if you try to white rhodium plate it. Other than that I’m not aware of discoloring agents. I do not use palladium a lot so I haven’t had many opportunities to see how it reacts to high heat etc.
Your Personal Jeweler,
Calla