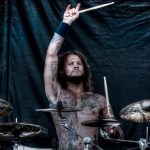 Bangin, the Opposite of Boring

Please allow me to disabuse you of the notion that my job as a jeweler is totally boring and without excitement. Lately, I’ve met some of the coolest and most interesting people.

Dean Potter, Whisper and His Fiance on Top of the World

A few months ago, I got a call from a guy in Yosemite who had found a beautiful arrowhead and wanted a pendant made for his fiancé.

I learned shortly that Dean is an extreme athlete. Not only does he climb thousand foot, Yosemite-type, walls of granite, he BASE jumps from the top of insanely high natural and manmade objects all accompanied by his amazing  dog Whisper.

Yes you read right Dean BASE jumps with his dog loaded up in his pack. How banging is that! 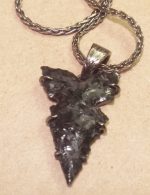 Arrowhead of Loveliness set as a Pendant

Getting to dream up how best to set 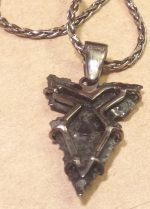 The Back Side Detail of the set Arrowhead

the delicate arrowhead was a challenge and a pleasure. I used a black rhodium finish to make the white gold I used blend in with the arrowhead itself.

I ended up using black rhodium as well on the white gold chain it hangs from. When you have a dark or antique-y piece having bright white or yellow gold would just jar your senses. It'd be the opposite of bangin and I was so not going there! 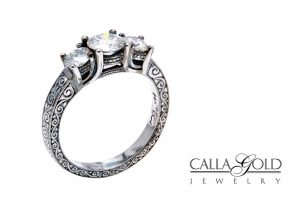 Around the same time, the drummer of the  famous death metal band Whitechapel contacted me via the internet.

He was on tour and wanted to propose to his girl. He'd found me online. Yay Google images, (which is where I found my pictures of Ben).

He needed a rockin engagement ring for his fiancé like my black rhodium finished diamond trinity ring. Who knew heavy death metal musicians even got married! Bang number two!

I’d heard of BASE jumping and death metal but didn’t really know what either was all about.

I discovered that BASE is an acronym for Building, Antenna, Span (like bridges), and Earth (like mountains).

Enthusiasts—of which I am not!—parachute from the top of these fixed objects. Check out the video above of Dean and Whisper BASE jumping.

Well actually I am enthusiastic about watching it. Just not doing it. Tandem hang gliding is as extreme as I've gone. It was pretty fun.

The Band at a Huge Venue. The Things You Find Out When You Meet New People!

Death metal is a sub-genre of heavy metal music that typically invokes dark themes—like death, destruction, and satanic rituals. And stuff like that!

See ya learn something new everyday! And I don't want to wreck his rep, but Ben is a nice cool guy.

You Needn't Jump off Cliff to Bang

Speaking of which, another client of mine, Carol, is an amazing businesswoman working more hours than me in her seventies, collects skull-themed art.

I created for her a spectacular, multi-gem, gold ring featuring—you guessed it—a skull in the middle. Bang! Bang!

Sometimes the Mosh Pit Comes to You

Several years ago, a local college student called me up late one Sunday begging me to saw off a silver ring digging into his purpled finger.

I wasn’t feeling all that well, but said if brought he me a jug fresh squeezed orange juice I would remove the offending piece of jewelry. Not only did he show up with the juice, he gave me two concert tickets to Stone Temple Pilots in which his step-dad was the drummer. Bang, bang, bang!

We ended up in the "The Pit" at the Santa Barbara County Bowl. It was our first experience with the Stone Temple Pilots. Hmmm. I probably should have listened to some music videos ahead of time to know how to dress and what to expect. It was unexpected, and bangin in its own way.

Dean Potter Died in a base jumping accident.

I'm feeling the wind out of my sails. My client Dean Potter, base jumper, free climber and tightrope walker in some of the prettiest wilderness places in the world is dead.
The Washington Post article.

My sympathy is with his family and friends and the base jumping community. What a loss of a deeply spiritual man, a deeply loving man, a brave adventuring man and a beacon to many in their quest for meaning and experiencing the fullest this life has to offer.

Calla, what a bangin’ post. I love reading about your awesome guy clients. That video of Dean base jumping with Whisper was just amazing. I thought that guys flying like that was some hoax exposed by Snopes.com. I’d seen an adventure video on Facebook a couple of years ago and someone said. “fake!” Well now I know it’s real. Dean and his dog are flying! Then Ben, well hello! I checked him out online too. I love his all-in enthusiasm on the drums. Totally had no idea what the words were, but maybe I don’t want to know right? You… Read more »

Dear Tracey,
Yay, what a fun response to read first thing in the morning. You are such a kick. I too enthused about these exciting clients, going to YouTube unnecessarily and being entertained and moved.
Your Personal Jeweler,
Calla

I love this blog post! What a great way to showcase some of your clients and what you did for them. Very clever. I also love your sense of humor and the jewelry you designed for your banging clients.

Hello Andy,
It is fun to share my excitement about the great clients I get to work with. I’m thrilled too that you like the jewelry I made for them!
Your Personal Jeweler,
Calla Gold

My husband Mark and I are fans of heavy metal music from the 1980’s and 1990’s so this article was fun to read. Keep up the great work, as you always do!

Hello Nancy,
Thank you for letting me know about your love of heavy metal classic. I did not know that. I’d only known about your cool jewelry designs! I’m pleased you enjoyed my post!
All the best to you,
Calla