Sometimes You Get That Call That Will Inspire You

When Edbbie called I was twenty minutes from leaving my office for a full day of appointments. He wanted to know if I could possibly make him his dream ring in time for his wedding.

When I found out he was getting married in three weeks I started to get tense. Then he said he was calling from Georgia, wow what next?

My Favorite Rings Seem to Always Come With a Great Story

As he described his dream ring with roses and vines done in enameling, excitement replaced my nerves. 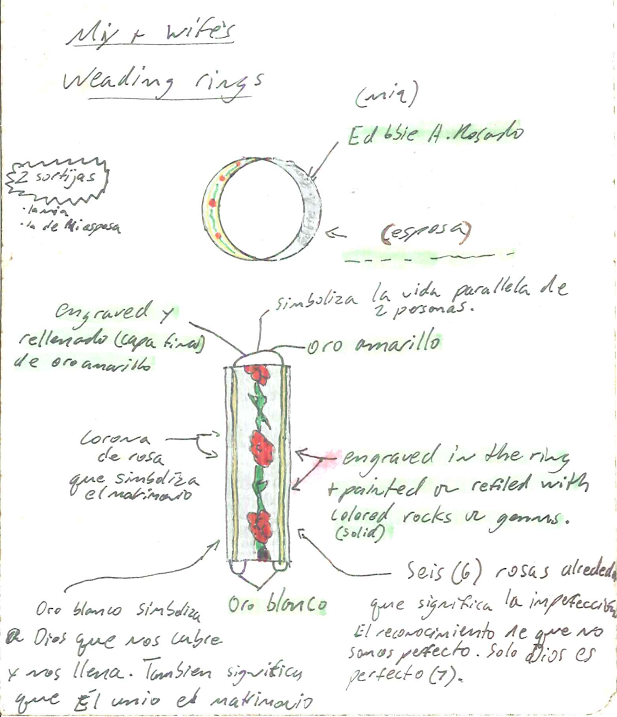 When Edbbie was ten years old he drew a ring with roses and vines. He had kept that drawing all these years.  As years passed he even drew instructions on it.

He took it to one jeweler after another asking if they could make it. The answer was always no. Years went by.

He then got engaged to Meaghan, the love of his life. This ring idea had great meaning for him and he really wanted it to be his wedding ring. He tried a couple of other jewelers. He got nowhere and set aside his idea. 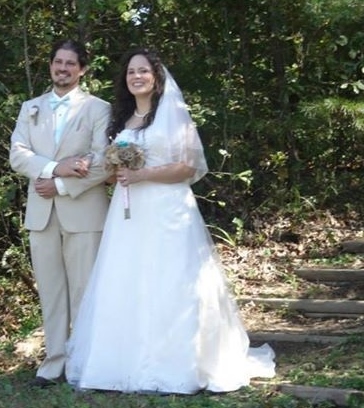 That Enamel Blog and the Last Minute Try

I had written a blog post about enameling jewelry and Edbbie found it while searching online one last time, searching for a way to have his dream ring made.

He picked up the phone and there I was,  more fascinated by the minute as he told me his story. His last name means pink and rose in Spanish. I was his last ditch effort to get his dream ring made for his wedding day.

How could I resist such a beautiful challenge?

The Vision of a Ten Year Old Meets a Determined Jeweler

We called and emailed each other through the day as I had Edbbie double check his finger size and email me the drawing he did when he was ten.

Meanwhile I was talking to my CAD (Computer Aided Design) guy, my enameler and gold caster and trying to figure out how wide I had to make Edbbie’s ring. Oh yeah, Edbbie wanted two thin yellow gold elements in his band. I also needed to figure out how long it would take to make his ring if everyone who helps me worked together and put Edbbie’s ring on the fast track.

Detail From the First Draft of the CAD. It Had to be a Certain Depth for my Enameler to Successfully Enamel the Tiny Details

I gave Edbbie a rough idea of the cost of his ring. He said, “get started!” My CAD guy jumped on it and made the CAD faster than he ever had. “I basically bumped everyone for Edbbie!”

When I emailed the CAD to Edbbie, he asked if there was any way to add one more vine so they intertwined. The Answer was “Yes!”

We had such a tight deadline for each step of Edbbie’s ring that it was on my mind each day as his wedding crept closer. 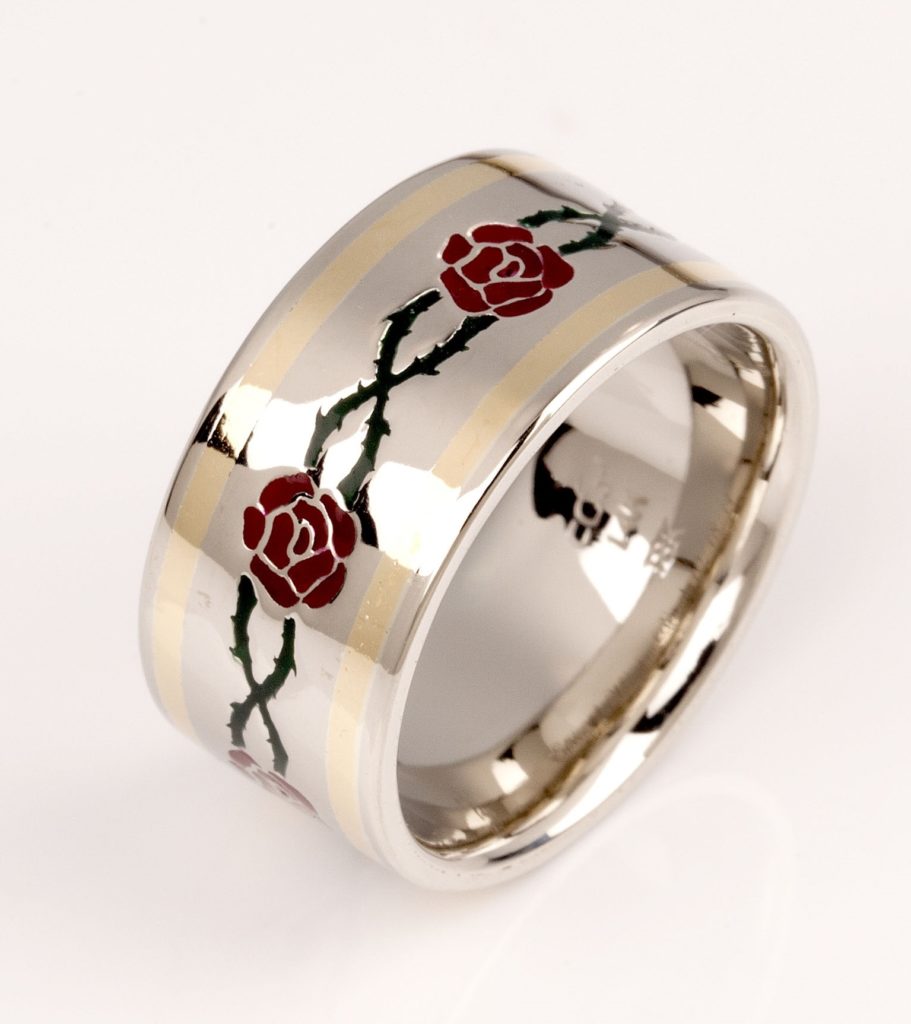 All the Stars Align

When all the steps were finished I felt so happy. This romantic project both challenged me and pushed out my boundaries.

Then I mailed it overnight and it arrived the Thursday before Edbbie’s Saturday wedding.

Here’s what I heard from him in this email:

The ring just got here. It fits and it’s absolutely stunning. Thank you! – Edbbie R.

Edbbie, I thank you! Across time and space a unique ring was created. It was a great ride and I was so happy to be a part of making your dream ring become real. Your vision as a ten year old was pretty extraordinary!

Calla,
This is such a lovely story! Thanks for sharing!

Hello Nancy,
Thank you for letting me know you liked it! That pleases me greatly.
Jeweler across distance,
Calla Gold

Wow, what an incredible story. Reading that just fired my imagination. I really love how you were able to save the day on such a tight deadline.
Eddbie’s ring is unique and his vision wonderful.
Thanks for the love story.

Hi Tracey,
I hope Edbbie and Meaghan see your beautiful comment. It’ll make their day. It made mine!
Happy Jeweler,
Calla Gold

What a wonderful love story, so enchanting and to think you made his wish come true is quite remarkable!

Hello Judith,
Thank you so much for jumping on the romantic band wagon and enjoying the love story with me!
Dream Ring Jeweler,
Calla Gold

Calla, this sounds like a fairy tale. Or, the back story of a fairy tale. Glad to know romance is alive and well in the modern world.

Hello Amy,
I never outgrew my love of fairy tales and love stories. Working with Edbbie was a time full of joy for me because of the amazing story he shared with me about the designing of his dream ring.
Like you I’m delighted to know romance is alive and well in our modern world!
Romantic Jeweler,
Calla Gold

Thank you so much Calla for facing this challenge head on and for delivering above my expectations! I didn’t tell you this in my e-mail but when I opened the ring on that Thursday afternoon I actually cried. That ring couldn’t have been any more perfect. The funny thing was that after my emotions calmed down that evening I knew that everything was going to go smooth with the wedding and a deep sense of calmness came over me about the whole thing. I couldn’t have asked for more. Not even rain could of messed up our outdoor wedding now.… Read more »

Dear Eddbie, In all my life I will remember your dream ring with such happiness. We just got together over distance and made magic happen. Reading this brings tears to my eyes. When I became a jeweler I dreamed of being helpful and useful in people’s lives. What we did together was so meaningful to me too. Thank you so much for sharing how it calmed you and how much in love you are. That is so wonderful. Thank you for taking the time to write what you wrote. I feel elevated. If ever I need to remind myself why… Read more »

I’m the mother of the groom, and I was the astonished one when he opened the box with the dream ring inside. Because I always knew about his dream since he was 10. The story made me cry for all those years he waited so patiently. And you made it come true. Thank you so much.

Dear Abigail,
As the mother of a twenty two year old son with many dreams I love reading your comment. This ring and how Edbbie found a profound love and had a dream of this love ring lives in the firmament of my mind. I’m moved at its affect on you emotionally and I am so happy you shared a mother’s view of this story.
Happily,
Calla Gold