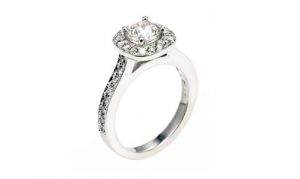 Severe reality adjustment and serious bummer for a sweet guy.

John and Candy had been dating for two years when John finally decided the time had come for him to pop the question. First, though, and with the help of good jeweler, not Calla Gold Jewelry, he designed an engagement ring he thought she'd love.

He planned on proposing and giving Candy the ring where they had first met. With the sun setting over the ocean in Santa Barbara, John romantically got down on one knee and asked Candy to marry him.

The Sad Ending Part and a New Beginning

To make a long story short, she declined and moved to another state. Not only was John devastated…he was stuck with a very expensive ring.

The good news is, John was a good guy and a year and half later he was involved, hot and heavy, with his new girlfriend. Unlike Candy, Pam wanted to marry John and wasn’t shy about dropping hints.

Once again, John decided to propose. He asked me to size the old engagement ring to Pam’s finger size. As the Emily Post of wedding jewelry etiquette, I had to tell him, “No!”

He opened his eyes wide.

“John, it’s not right to give Pam your old girlfriend’s engagement ring. It’s OK to re-set the nice center diamond, but the setting needs to be designed especially for Pam.” I went on to say that he could propose to her with the diamond set in a simple four prong setting. If he wanted he could then explain to Pam that they’d design the ring of her dreams together.

John said, “It’s just a ring. It’s not like Candy even wore it.”

I replied, “If you tell Pam the history of the ring and she still wants it, I’ll size it for you.”

"But I want to surprise her!"

"Take my word for it, that's a surprise you don't want to start your life together with."

Wedding Jewelry is Just So Important!

A Woman's Most Cherished Jewelry By a Mile

What I tried to say was that a wedding ring is the single most important piece of jewelry a married woman will ever wear.

It’s more symbolic and emotional and filled with love than John could know. I wanted her to love her ring and her man.

Sometimes You Have to Hear What You Don't Want to Hear Twice!

A week later, John called and said, “I asked Pam’s mom if she thought it would be alright for me to give Pam the old engagement ring. Man-o-man! Did I get an earful. You were right. So…take out the diamond and put it in the size 5 little prongy thing you were talking about."

The next time I saw him was with his new fiancé Pam. When we sat down to design her new engagement ring. She couldn’t have been more excited.

Whatever Happened to the Old "Candy" Ring?

A couple of years later, Pam told me that John had finally explained all about the “Candy” ring and thanked me profusely for setting him straight!

Then to my surprise, she pulled out the old ring with the empty center. “Can you give me credit for this? I'm thinking about a new pair of earrings!” she said. “I don’t really need this reminder of one of John’s old flames.”

If at first you don't succeed, try, try again. My mom said that a lot. I'll just add, not with the same ring!

I love that. I’ve never thought of myself as a coach, but I do find myself with arm up going, “wait!” on occasion. Thank you for your viewpoint, good Doctor!

I agree that a wedding ring is one of the most important pieces of jewelry there is. It’s symbolic of all your love and your promise to stay together. You want to make sure that you choose the exact right one because it means so much more than just that you’re married.