Vikki's Inherited Ring. It's Beautiful, Diamond-Covered Design Was Simply Too Big for Vikki.

Vikki was at a Crossroads. She came to me with an inherited ring from her mother. She thought the design was beautiful, but the ring’s scale was an issue. Not only was the ring too big for her finger – its design was just too big for her hand.

Vikki was upset that her mother’s ring was not being worn, and she asked if I would help her find a way to get the ring out of the jewelry box and onto her finger.

Not only was I willing to help – I was eager to!

Vikki wanted to know if there was a way that we could create three rings from the original. She explained that her two daughters adored their grandmother’s ring, and that they had actually been the ones to suggest having it redesigned.

I thought that was a lovely idea! There were plenty of diamonds to use for a redesign, however neither of us wanted to just scrap the ring for parts. We decided to preserve as much of the original design as possible.

From the Side, You Can Clearly See the Three Merged Bands.

I asked Vikki if she could see herself wearing just the center ring. She wasn’t sure, so I showed her one of my display rings that featured a similar design with a similar taper as the one we were considering. She tried it on and confidently announced, “I’d wear that!”

I told her I’d first free the center portion of her mother’s ring and then rebuild it as necessary so that she could wear it.

The Finished Products, Ready to Wear!

When I separated the three rings, Vikki’s center ring was very thin. I re-shanked it to make it thicker and re-tipped a number of prongs. It was now ready to wear!

I brought Vikki the ring, and it was a joyful moment. After that, I showed her how many leftover diamonds we had to work with and offered some setting styles for her daughters’ rings. We decided to make two simple straight diamond bands using the remaining diamonds.

Two Rings for Her Two Daughters

Vikki and Her Daughters Loved the Rings!

I finished the rings for Vikki’s daughters and brought them to her. She wanted to give them to her daughters right away, but decided to patiently wait until Christmas to surprise them with the beautiful diamond bands.

Shortly after Christmas, I received an email from Vikki which included a warm “Thank You” letter and a picture of the three lovely ladies proudly showing off their new re-purposed inherited rings.

Wear It, Don’t Warehouse It 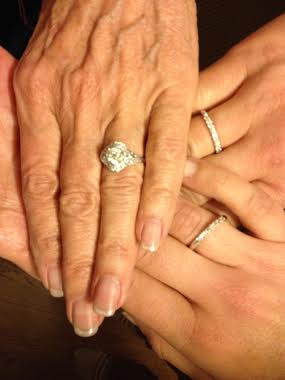 A Redesign Turned One Unworn Ring Into Three Beautiful Reminders of A Loved One.

The wonderful thing about inherited jewelry is that it symbolizes a loved one, whether they are with us or not. That’s a value you can’t count on your fingers!

I firmly believe that it’s better to redesign diamonds and wear them than to let them sit, unchanged, like a fly in amber – that reminds no one of a person’s love, humor, or wisdom.

If you can’t wear it like it is because it’s not your style, there’s no shame in redesigning it! Every time you look at your redesigned jewelry, you’ll be reminded of the one who lovingly gave you the original piece.

This is a heartwarming story with a very happy ending, thanks for sharing!

Dear Nancy,
Thank you for your warm response. I love that happy ending. And a joy shared is a joy doubled right? Thank you for making me smile happily.
Your Personal Jeweler,
Calla

Calla, these are absolutely gorgeous!! Your expertise has shone through once more. This has got me thinking about a ring that I might need to bring in to you!

Dear Jennifer,
Ooh, I love it when one of my blogs is a catalyst for action. I’d love to see your unworn ring.
Your Personal Jeweler,
Calla

HI Calla,
I wonder how many women have rings they aren’t wearing? Like Vikki’s one unwearable one.
I love this story of your redesign of this inherited ring. It is so creative, and yet honoring the beautiful design and doing some preservation as well. I really liked how 3 rings came out of it.
The picture of the three hands and the three rings is very moving. I may need to look into my jewelry box, I’m inspired to have a loving hands moment of my own.
Lovely!
Dani

Dear Dani,
There are a lot of women I am discovering who have rings they aren’t wearing. I’m so pleased you enjoyed this inherited ring story. It was moving to me as well.
Your Personal Jeweler,
Calla

Calla, what a great idea to create 2 additional rings. If more families would consider this approach to heirlooms it would probably save a lot of anger and hurt feelings. Truly, this was a BEAUTIFUL solution.

Hello Linda, This was such a loving gesture. I’m sure Vikki’s daughters had no anticipation of jewelry for themselves where this ring was concerned. I love how a gift to one person can become a gift to three. In a different situation one of my clients had three daughters. Two of them wanted her wedding ring when she died. Excuse me girls your mom is in her 50’s! Anyway, one said, “I’m the eldest it should go to me.” The other said “I work in the non-profit field helping others, (name withheld) is a stock broker she can buy her… Read more »

An elegant solution to a frustrating problem! Have you ever done this before (turned one piece of jewelry into multiple pieces)?

Hi Dr. Lynn,
I have indeed gotten multiple pieces of jewelry from single rings before. My Guinness World Book of Records one, (biggest example ever) is where I took a groaning huge ring, took it apart and made six pieces of jewelry.
I’m guessing that this fun gal was told, “honey you’re going into the old folks home and you can only bring one ring.” I’d say if this was the case she had the last laugh.
Here’s that post:
https://www.callagold.com/all-about-earrings/wear-it-dont-warehouse-it-one-inherited-ring-redesign-makes-a-new-jewelry-wardrobe/
Thank you for the blue ribbon question of the day!
Your Personal Jeweler,
Calla

I have a .40 ct. European cut or old miners cut diamond from my mother’s original engagement ring. It is at least 75 years old. After my dad died my mom had it reset and made into a widow’s ring. I would like to offer the diamond to my son to be reset and made into an engagement ring for his girlfriend. Can you suggest a few types of settings that might be good to make the diamond look a little larger without looking gaudy. Would a small halo look good? Any suggestions would be appreciated!!

Hello Pat,
A small halo could indeed add to the size look of your diamond. The most important thing to do is to make sure the side diamonds are also older cuts. The design of the ring should ideally be vintage style. That kind of design de-emphasizes the deficits in sparkle or color of older diamonds.
Your Personal Jeweler,
Calla